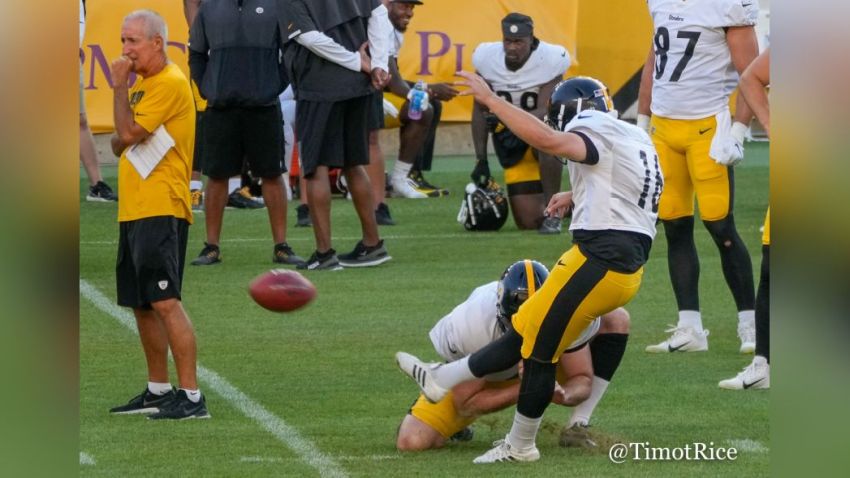 Kicking behind Chris Boswell is one of the least attractive positions a kicker can be. You won’t exactly be in a camp battle with the guy. But that’s where Sloman finds himself heading into the offseason. And rare for a backup kicker, he has a bit of familiarity and stability.

Sloman was signed to the Steelers’ offseason roster in July of last year, just a couple of weeks before the team reported to Heinz Field for training camp. He was carried throughout camp, palling around with Boswell and the rest of the specialists. The few days the team kicked field goals in practice, Sloman looked serviceable, though less successful than Boswell, going 5/7 one day while Boswell missed just once.

His preseason game performance was shakier, badly missing twice on two kicks – a field goal and extra point – in the Hall of Fame win over Dallas. He did redeem himself later in the game with a 48-yard conversion. He appeared in the team’s second game, bettering himself with a 3/3 day (two extra points and one short field goal) but was cut five days later as the team trimmed its roster down to 85 as part of the first wave of cuts.

Pittsburgh brought him back on the practice squad in mid-November, an emergency Plan B as COVID hit the Steelers’ locker room and the team wanted to protect itself, though they still ended up scrambling for a punter when Pressley Harvin III became unavailable due to the death of his father on Christmas Day. Sloman wasn’t kept the rest of the regular season, released on December 13th. He was again brought back prior to the team’s playoff game against the Kansas City Chiefs, again as an insurance policy, and inked a futures deal once Patrick Mahomes and company ended the Steelers’ season.

Unlike many players in this futures series, Sloman has some NFL experience. He’s appeared on Sundays for two teams, the Rams and Titans though his success has been shaky, 23/26 on extra points and 10/13 on field goals. His last NFL appearance was his best, going 7/7 on total kicks against the Texans, including the game-winning 37-yard field goal as time expired. It barely went through, bouncing off the right upright and in, but they count all the same and won the South for Tennessee.

Without the need to add serious competition, Sloman should be carried into camp yet again. His job will be what it was in 2021, helping to keep Boswell’s leg fresh during the summer months so he’s strong throughout the winter. He’ll also be at least one Miami (OH) alum on the roster. It’ll be like Ben Roethlisberger never retired.

Sloman’s odds of winning the job are, barring injury, effectively zero, but he can use the first few weeks of August to put on some tape to send around the rest of the league. Not all 32 teams start their seasons with the same kicker they end with.

At the least, if Sloman performs well, he’ll be on the Steelers’ speed dial during the fall, should the team get more bright ideas to have Boswell cosplay as a quarterback again.