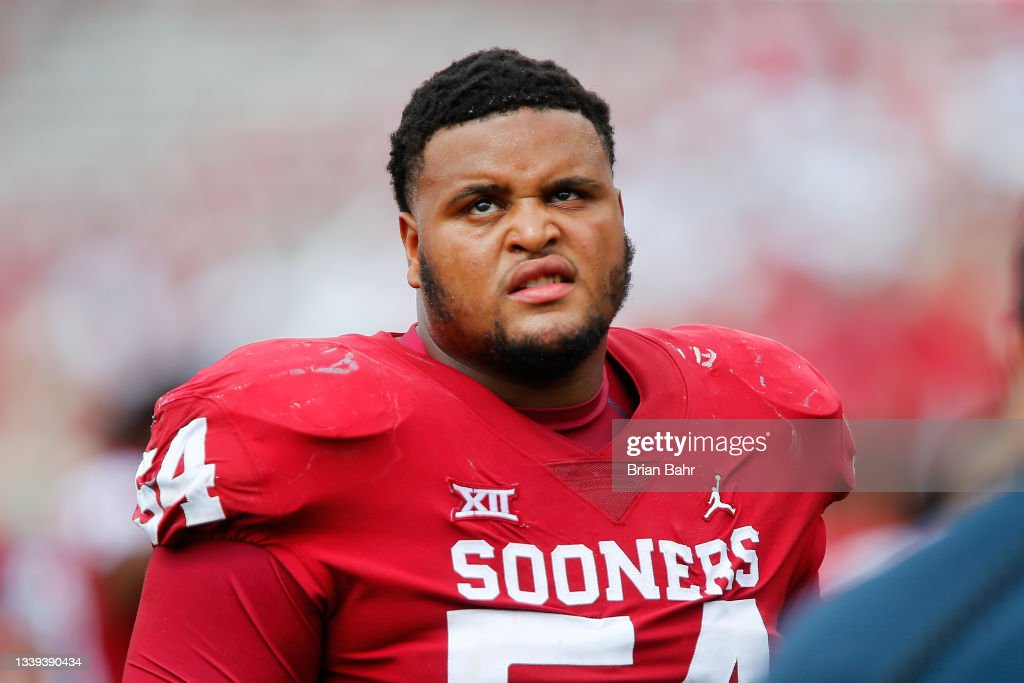 From now until the 2022 NFL Draft takes place, we hope to scout and create profiles for as many prospects as possible, examining their strengths, weaknesses, and what they can bring to an NFL franchise. These players could be potential top 10 picks, all the way down to Day 3 selections and priority undrafted free agents. Today I’ll be profiling a guard with a lot of starting experience in the Big 12.

— Above average length
— Excellent core and hand strength
— Good mental processing identifying who to block
— Aggressive blocker always looking to finish
— Best fit is in a Power/Gap scheme
— When his form is good, hard for defenders to disengage
— Good awareness on stunts and twists
— Head on swivel/good help in pass protection
— Plenty of starting experience

Hayes is a physical, high cut interior offensive lineman with a bit of nasty to his game. He has very good length and impressive core strength. The redshirt senior was a starter for three seasons in the Big 12 in the Oklahoma offense that has produced several NFL starters in recent years including a couple of Heisman winners.

As a run blocker, he displays good snap quickness and first step. Oklahoma ran multiple run schemes asking him to execute many types of blocks. He was best in the Power/Gap run scheme to take advantage of his play strength and desire to move blockers. On down blocks and double teams he used good leg drive to get a good push. Finishing blocks is a big goal for him looking to put every defender he faces on the ground. He has good awareness when pulling to identify and pick up the most dangerous defender.

Vs Texas, Hayes (54) will pull to the right and pin the linebacker to the inside finishing the block yanking him to the ground.

Vs Iowa State, he will square up the linebacker and drive him out of the play.

When using good hand placement on the defenders chest plate he is hard to disengage from and his hand strength and aggressiveness give him the advantage. He showed solid timing on combo blocks to climb to the second level. His aggressiveness is always on display looking to hit somebody and anybody.

Vs Nebraska, I like the effort here to get a piece of three different players while blocking and still looking to hit more.

Vs Nebraska, he gets good position to the outside on this combo block with the center and when the center releases he stays engaged for five yards downfield.

Vs Oregon he is able to flip his hips against the heads up the defender and wall him off to open a big hole.

As a pass blocker, he has good snap quickness and can use his length to his advantage. With above average core strength his is able to absorb a lot of hits and reset his feet to slow the rush and handles power rushers pretty well. When engaged he looks for the opportunity to fling defenders to the ground. He showed good awareness on twists and stunts to pick up the looping defender. Keeps his head on a swivel looking to help teammates or find someone to hit. When his technique is good he is hard to move.

At Baylor, he shows pretty good usage of independent hands to counter the movement of the rusher.

Vs Oregon, he displays good recognition on this stunt to transfer his player and pick up the looper.

He has marginal change of direction and lateral agility to mirror defenders. When pulling, he lacks the footspeed to generate momentum. His hand placement is inconsistent leading to grabbing outside the pads and trying to throw defenders. On Zone blocks he lacks the speed to reach block and has inconstant angles on scoop blocks. The longer he is engaged in a block the width of his feet diminishes. On down/pin blocks he gets out over his toes.

Vs Texas, he starts on the correct angle but doesn’t get outside the linebacker leading to him grabbing the jersey.

Vs Texas, he can’t get across the face of the nose tackle and gets pushed back into the backfield.

In pass protection, he plays with a high pad level and needs to work on refitting his hands when the defender gets into his chest. Couple that with the narrow base and he can get pushed into the pocket. Technique overall is kind of all over the place and he relies on strength. Didn’t see him get out in front on screens and question how effective he would be with his marginal foot speed. Struggles against a defender’s lateral movement to mirror their pass rush from side to side.

Vs Nebraska, the pass rusher will start outside and move inside on his pass rush. Hayes will overreach for him and defender goes over him.

Overall, Hayes is a good combination of size, length and strength. He has an aggressive temperament looking to pancake everyone and can get movement in a Power/Gap running scheme. He uses his core strength and length as a pass protector and displays good awareness on stunts and twists. With inconsistent form and technique as a run and pass blocker he needs to improve on pad level, hand placement and mirroring defenders.

There is potential in Hayes’ game and if he can be coached up to be consistent with his technique he could be a gem of find. His length and strength will be coveted. Pittsburgh must improve the run game they’ll like his aggressiveness but he looks to be strictly a guard. His best fit is in a Power/Gap running scheme and could eventually work his way into a starting role at guard in a year or two. Trai Turner has a similar size and length and both needed work on technique coming in to the league.

Games Watched: 2021 – Vs Nebraska, Vs Texas, At Baylor, Vs Iowa State, Vs Oregon