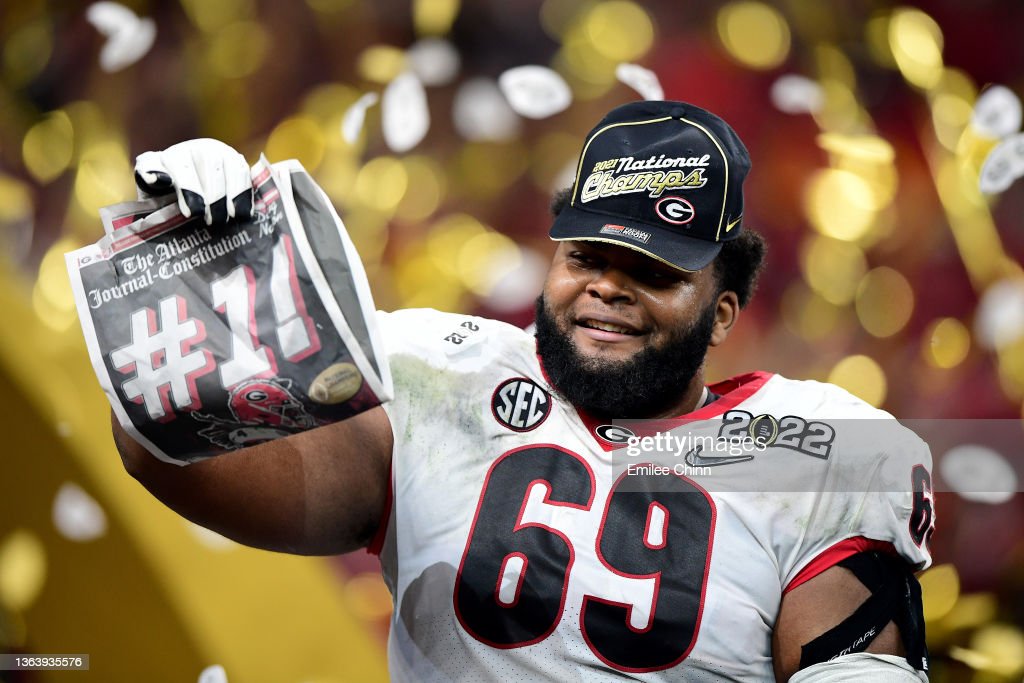 From now until the 2022 NFL Draft takes place, we hope to scout and create profiles for as many prospects as possible, examining their strengths, weaknesses, and what they can bring to an NFL franchise. These players could be potential top 10 picks, all the way down to Day 3 selections and priority undrafted free agents. Today, I’ll be profiling an offensive line prospect that has extensive playing experience all over the offensive line for the reigning National Champions, but his projection to the league is directly tied to his measurables.

— Thick build with long arms
— Barrel-chested blocker that can be tough to move for power rushers when he has leverage
— Strong hands allow him to latch onto defenders with a vice-like grip
— Has a strong, powerful punch that can knock defenders off their feet
— Fairly accurate with his punch on the defender’s torso, having the upper body strength to shock them back on first contact
— Has the strength to kick out edge defenders or wash interior defenders out of the gap
— Has the movement skills to get out in front on screens as well as effectively pull or climb to the second level
— Has the lateral movement skill to mirror pass rushers side-to-side
— Strong quick set allows him to get hands-on pass rushers early, neutralizing their pass rush
— Has position versatility, having taking snaps at all five offensive line spots in college
—Two-time team captain who was known as a team leader with a well-spoken demeanor

— Doesn’t possess the lower body thickness to match his upper body, thus giving him balance and flexibility issues
— Ends up on the ground more than you’d like to see for a player of his strength
— Can get high and extended off the snap of the ball, thus leading to him lunging over his feet
— Will shoot his hands forward without having his feet set underneath him which leads to whiffed blocks
— Can have his base narrow on him at times, making it easy for defenders to walk him back or stack and shed him due to poor base
— Can have trouble adjusting to speed-too-power rushers when he stands up initially on the block

— Senior prospect from Atlanta, GA
— Born July 13, 2000 (age 21)
— Selected to play in the 2018 U.S. Army All-America Bowl after being a five-star prospect and ranked as the #1 OG nationally, 2017 HS All-American
— Top Lineman MVP in the Final Five Lineman Challenge at Nike’s The Opening 2017 Finals
— Also threw the discus and shot for the Pace HS track team
— Played in 13 of 14 games as a reserve offensive lineman and on the point after attempt unit as a true freshman
— Played in 13 of 14 games as a sophomore in 2019 with two starts at RT
— Started at left tackle in the season’s first nine games, but moved to left guard for the Chick-fil-A Peach Bowl in 2020
— Started at left tackle in 11 of 15 games as a senior while also kicking inside for extensive action at both guard spots where he was credited with ten “knockdown” blocks & surrendered only two hurries & no sacks during the season
— Missed four weeks due to a foot injury his senior season
— Named the 2021 Dick Copas Leadership Award winner at the Dawgs Choice Awards program
— Second team All-SEC in 2021, Second team All-American in 2021 via Coaches vote, 2022 CFP National Champion
— Two-year team captain
— Received his undergraduate degree in Sport Management during Fall 2021

The National Champion Georgia Bulldogs sent a whopping 14 players to Indianapolis for the 2022 NFL Combine, being the lead mark for any school. While their vaunted defense garners the headlines, and for good reason, the Dawgs are sending several talented offensive prospects in their own right to the 2022 NFL Draft. One of those names is OL Jamaree Sayler, a versatile offensive lineman who has taken snaps at all five positions during his time at Athens with extensive experience at LT and either guard spot. That ability to contribute at so many spots speak to Sayler’s pedigree coming out of high school as a consensus five-star prospect and the #1 OG recruit in the nation.

When you plug in Sayler’s tape, you see a stout, barrel-chested blocker that dominates with strength and power at the point of attack. He has large, heavy hands coupled with long arms in comparison to his height that allow him to land his punch on defenders before they can get a hand on him. I personally saw Salyer put up 31 reps on the bench at the Combine last week, and that power in his strike shows up on tape as well. No one plays displays that strength with his punch than this rep against #97 Adian Hutchinson that went viral during the CFP Semifinal Game.

Sayler is effective on the kick out block on the edge with his punch, having the power to knock defenders off their feet. He also has decent mobility in open space, being able to get out on screens and when asked to pull to lead up the hole to clear running lanes for ballcarriers. We see a two-play sequence here against Clemson where Sayler knocks down defenders on consecutive plays, one being a kick out block and the other on a WR tunnel screen.

Here is another example of Sayler on the move against Vanderbilt, this time pulling from the tackle spot where he locates the linebacker and levels him at the second level.

Sayler not only has the play strength to displace smaller linebackers and defensive backs, but also large interior defensive linemen when asked to play inside. Here on this rep during Senior Bowl practice, Sayler lines up at RG and successfully pushes DL John Ridgeway back out of the play. Sayler plays with a good punch yet gets a little upright and would later end up on the ground which tends to be a reoccurring theme when combing through his tape.

While more suited for playing inside at guard at the nest level due to his build, Sayler has represented himself well on the blind side during his time in Athens. He has faced some of the best competition coming off the edge as a pass protector and has held his own, representing himself well with steady feet as well as a strong punch and grip to latch onto pass rushers and neutralize the rush. He truly did a great job limiting the impact of #31 Will Anderson of Alabama who is considered the best player in all of college football, preventing him from wreaking the game when the two went toe-to-toe in their two meetings this season.

While a physical player in terms of the power he possesses in his punch, Sayler also is cerebral in understanding the pass rush and does a great job identifying twists and stunts upfront. Here on this rep against the Tide, Sayler recognizes the twist and seamlessly passes of Anderson to his teammate #54 Justin Shaffer as he picks up #94 D.J. Dale to give #13 Stetson Bennett time to make his throw.

Still, there are some areas of Sayler’s game that need to be cleaned up to truly take his game to the next level in the pros. He likes to flash his hands early, leading to him lunging forward over his feet with his shoulders, thus leading to whiffed blocks. Watch this rep against Michigan where Sayler shoots his hands and stalls his feet while #55 David Ojabo executes the outside spin move to counter the punch which catches Sayler off-guard as he attempts to turn back into Ojabo coming around the corner. He is unable to cut Ojabo off as the pass rusher pursues Bennett who manages to throw the ball away.

Here is another example against South Carolina where Sayler leans into his block with poor hip bend against #1 Kingsley Enagbare who executes a nice push/pull one Sayler, sending him flying forward as he sheds the block. Still, #18 J.T. Daniels manages to locate his target and complete the pass before the pressure can get home.

Along with playing too far forward over his pads and with inconsistent hip bend and anchor, Sayler ends up on the ground far too often on tape than what you would like to see for a player of his size and strength. Defenders know how to use his momentum against him and get him falling forward like we see on this stack and shed against Clemson. Sayler needs to do a better job of playing with better leverage and balance to prevent falling off blocks and be more consistent at maintaining his blocks to and through the whistle.

When I watch Sayler, I see a versatile player that has played all over the offensive line during his time in college. While he figuratively could play some snaps at tackle, his best fit at the next level is finding a home at guard where he can play inside a phone booth and use his attributes of strength and power to his advantage by taking on defender’s head on, albeit with better technique in terms of hip bend and avoiding his tendency to lunge forward. He has shown to be a capable pass protector as well and could be a good option when facing the quicker interior pass rushers given his experience at the blindside against speed rushers coming off the edge.

When watching Sayler, I see a player with similar size, body type, and play style as current Bengals OG Quinton Spain. Spain was a road grader coming out of West Virginia, having the long arms and strong upper body to displace defenders in the run game as well as knock back pass rushers when in pass protection. Still, both Sayler and Spain lack ideal lower body thickness and ideal hip bend to anchor, tending to be aggressive in playing over their pads, thus leading to whiffed blocks, and ending up on the ground on occasion.

Sayler projects to be a capable starting guard at the next level that is looking for a physical presence on the interior that also has some good athleticism to him as well. He also is a two-year team captain, being a great interview as a genuine person and an even better teammate. The Pittsburgh Steelers conducted an informal interview with Sayler at the Combine and spoke to him at the Senior Bowl, suggesting they are getting a feel for him as a prospect should they decide to bypass one of the top options in the first round. Should he be on the board somewhere on Day Two, Pittsburgh will likely have him amongst those to consider on their draft board.