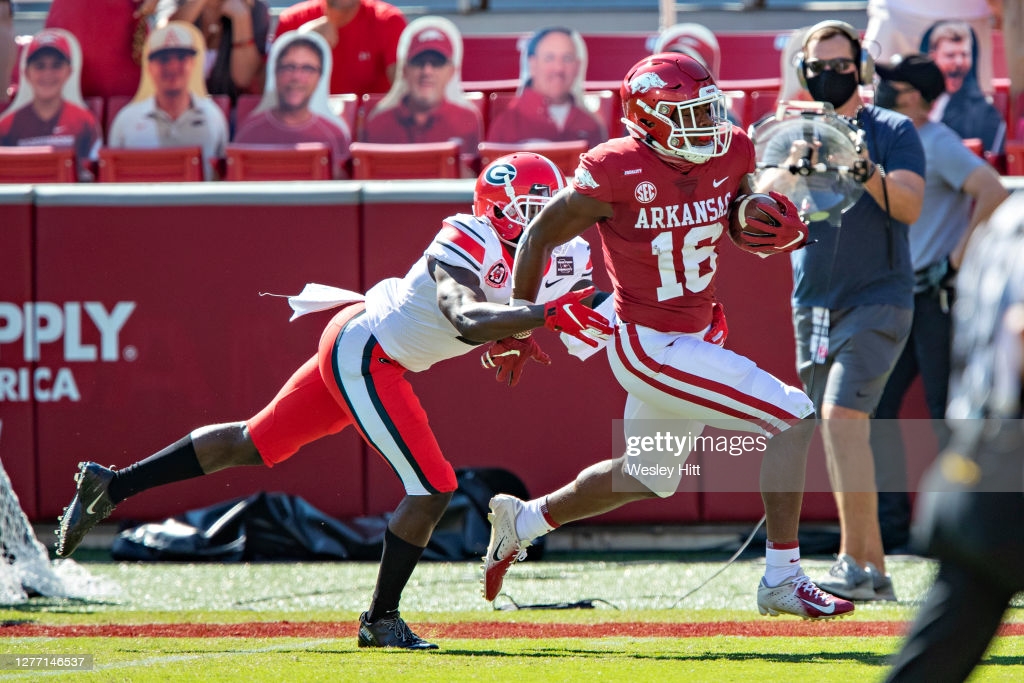 Welcome to the 2022 NFL Combine. Today marks the start of the on-field workouts for those invited to Indianapolis this season with the quarterbacks, wide receivers, and tight ends going through on-field drills Thursday. Follow us as we update our spreadsheet of the testing. Here are some things to keep an eye on as these prospects go through their testing.

— It’s still a jumbled top of the draft class with no clear-cut, #1 quarterback. Malik Willis has the best chance to cement himself as the first arm off the board. He’ll wait until his Pro Day to run the 40, so don’t wait around for him to run. But we know he’s fast and a great athlete and should test somewhere in the 4.4’s, a fantastic number for any quarterback let alone one with a well-built frame like Willis. But he’ll throw and get to show off his great arm. Biggest thing for him is placement and accuracy and if he can do it consistently throughout the day.

— Disappointed Matt Corral isn’t going to throw here. After being ineligible for the Senior Bowl, this would’ve been a great chance for him to perform against his peers. That won’t happen this year. Corral is a potential first-round pick but he’s not a slam dunk guy like Trevor Lawrence. Throwing would be important for him but he’ll wait to his Pro Day and ostensibly, get a little healthier after going down in the bowl game.

— North Carolina’s Sam Howell and Carson Strong should look good in this environment. Howell will have to show accuracy on the move. He didn’t throw on the run much last year, often pulling the ball down and scrambling when he decided to leave the pocket. Strong has a powerful arm but his deep ball will need to look better than it did at the Senior Bowl where it had a tendency to hang. Throwing indoors and not in the rain and wind of Mobile will help with that.

— Miami’s D’Eriq King was once a top recruit who had a turbulent college career. He’s planning to be the rare prospect who works out as both a quarterback and receiver during today’s workouts. Kudos to him for even attempting it. It’ll be a long, tiring day for him. He’s undersized and was reportedly shaky at the Shrine Bowl but he’s doing everything to get on a NFL roster.

— Will any QB surprise? Watch out for Kansas State’s Skylar Thompson. Five-year college arm who pushed the ball downfield in school. Didn’t have super gaudy numbers, 42 career touchdowns and just 12 in ten games in 2021 but I’ve heard some draftniks who are high on him. Beyond him, names like Brown’s E.J. Perry and Notre Dame’s Jack Coan are Day 3 options who could boost their stock.

— Good group here. Deep and talented, as it’s often become in recent years. But like most positions, there is no obvious #1 guy. Names such as USC’s Drake London and Arkansas’ Treylon Burks, along with Ohio State’s Chris Olave and Garrett Wilson, are all competing at the top.

It’ll be tough to do working on-air, but London will have to show quickness and the ability to separate at the next level. He’s a big, above-the-rim player, but many of those guys have dominated the college game and struggled at the next level. However, he appears to be opting out — at least of the 40 — due to an ankle injury.

— Penn State’s Jahan Dotson may turn in one of if not the fastest 40 at the Combine. Could be in the low 4.3’s. Speedster and a big-time playmaker at Penn State with great hands and catch radius for his smaller size. I think he’ll impress in drills.

— Couple other names to mention. Interested in seeing what WR George Pickens from Georgia runs. He says it could be high 4.3’s or low 4.4’s, but most analysts think it’ll be higher than that. He’s coming off a torn ACL and returned late in the year. We’ll see who is right. Memphis’ Calvin Austin should shine as a track guy (they’re always the most natural getting off the line in the 40 because they’re comfortable with the stance) and he should do very well with his agility scores. A guy who will look good in open grass. Kentucky’s Wan’Dale Robinson could earn some buzz with a receiver/running back background, the Deebo Samuel-flavor teams will be searching for this offseason.

— Solid crop of prospects though there is no Kyle Pitts or even clear-cut #1 guy. It’s a battle at the top between names like Texas A&M’s Jalen Wydermyer, UCLA’s Greg Dulcich, Colorado State’s Trey McBride, and Coastal Carolina’s Isaiah Likely. Dulcich had a strong week in Mobile, and as a former receiver naturally looked comfortable catching the ball. Likely will have to show he can become a better in-line blocker while Wydermyer can become a more household name as one of the few underclassmen in this pool.

Overall, this is a sturdy but not flashy class with plenty of depth.

— For Steelers’ fans, they’ll have a close eye on Michigan State’s Connor Heyward. He’s working out with the tight ends and projects as more of a fullback/H-Back at the next level. He displayed an easy-catcher ability at the Senior Bowl and should look fluid going through drills.