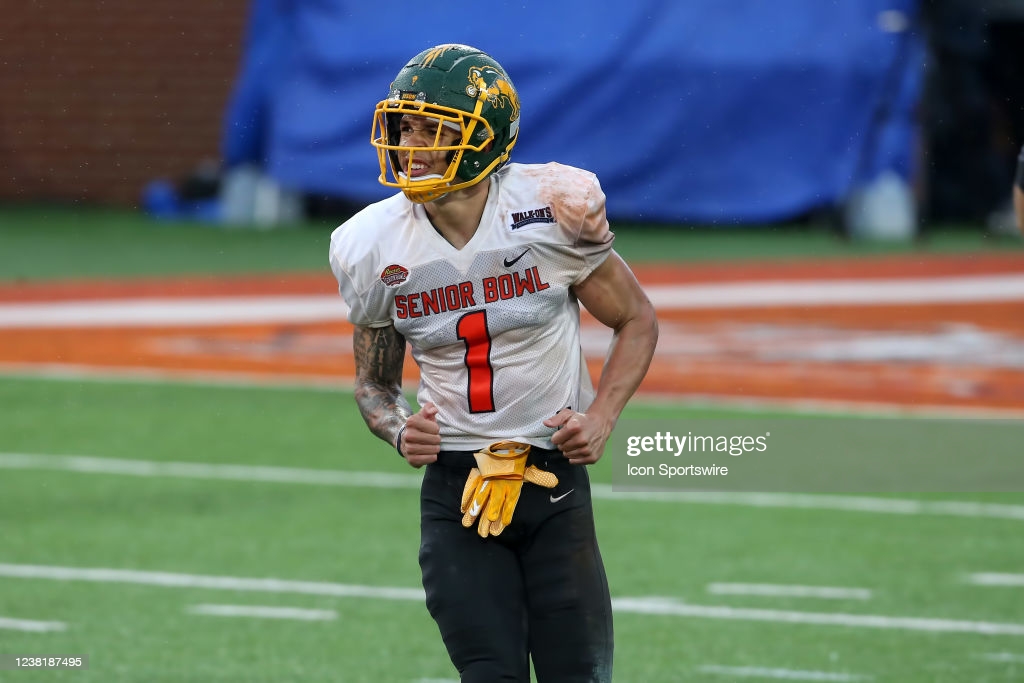 Day One of the 2022 NFL Combine is in the books. And there’s plenty to discuss from a busy day one at Indy. Let’s dive into the most notable notes from Day One.

— One reason why the Combine ended an hour earlier than expected is because so many players didn’t fully participate. Case in point. Only two quarterbacks of the first group – Notre Dame’s Jack Coan and Kent State’s Dustin Crum – even ran the 40. So props to both of those guys. Crum put in a solid 4.75 figure.

— Group Two saw plenty more quarterbacks run led by Cincinnati’s Desmond Ridder posting a healthy 4.52 time. His 36 inch vert and 10’7″ broad are elite scores for a quarterback and highlight his athleticism. He threw a good deep ball in drills, too.

— Malik Willis did not run but certainly showed his arm downfield. But his accuracy, an issue on tape, was a problem. On back-to-back post/corner throws, Willis was off-target. His first was a couple yards out of bounds and he overcorrected his next attempt, throwing too far to the inside and making his receiver slow up and reach back. Not going to complete that in the NFL. Willis flashed traits and that’s what teams will have to bet on because he’s not a finished product. Far from it.

— Can really feel and see the zip on Sam Howell’s throws, especially in the quick game. He threw the best ball on the five-yard outs, putting it on a rope and leading the receiver instead of floating it and being late like so many QBs. He had the fastest throw at 59 miles per hour and he tosses a pretty spiral.

— Said Carson Strong needed to show a better deep ball than he did at the Senior Bowl. And throwing indoors, he did. Pretty vertical shots that certainly wowed the crowd.

— For those scoring at home, Pickett threw with his patented two gloves. His workout was average. Nothing great or terrible. On-time type of passer but didn’t wow with his arm. That’s ok though. Those who win the “arm strength” test in an on-air workout don’t always become the best quarterbacks.

— Of the non-first round potential candidates, Notre Dame’s Jack Coan and SE Louisiana”s Cole Kelley stuck out the most to me for their consistency. Coan is a good “RAC” thrower in terms of accuracy, placement, and allowing receivers the chance to run after the catch. Western Michigan’s Kaleb Elerby struggled with his accuracy and routinely missed high on his throws.

— Shoutout to the QBs who competed. I don’t knock guys too much for not going through all their workouts but for quarterbacks, where you have to be the most competitive and sure of yourself dude on the field, I like the guys who went through all the drills. Those were: Coan, Crum, Pickett, Brock Purdy, Ridder, Skylar Thompson, and Bailey Zappe.

— Watson and Pierce are among the top height/weight speed guys with RAS scores of 10.0 and 9.98 respectively. Elite stuff. Tall, long, athletic guys who will be picked on Day Two.

— On the other end of the spectrum, Calvin Austin is one of the smallest receivers at Indy. But his track background and tape had you knowing he’d test well. And he did. 4.32 40 time, 39 inch vert, 11’3″ broad, and a position-best 4.07 short shuttle. Lot of fun on tape and looked good on air in drills.

— South Alabama’s Jalen Tolbert ran about where I expected, maybe a touch slower, but had a decent day. Going through the gauntlet, he bobbled the second throw but maintained focus and caught everything the rest of the way. Position where guys sort of fall apart and screw up the rest of the drill with drops, slowing down, and weaving over the line. James Washington-type of deep threat and I comp’d Tolbert to Jerome Simpson, but a slightly less springy version, in my report, which feels in-line with his testing.

— Miami (FL)’s Charleston Rambo had a tough day. Had one of the worst times through the gauntlet, looking lost one time through, and he ran 4.57 at 177 pounds with poor explosion numbers. Stock falling in a field of really athletic guys.

— Garrett Wilson did have a weird time through the gauntlet. He was hopping and leaving his feet on every catch. Not how you’re going to win in the NFL. Catch it in stride and get upfield. Far from a dealbreaker but a weird one. To his credit, he tested well and looked smooth on his routes downfield and tracked the ball well.

— A solid day for a solid, though not spectacular, group of tight ends. Maryland’s Chig Okonkwo won the testing, turning in an excellent 4.52 40 at 238 pounds. He also jumped 35.5 inches in the vertical. His performance in the drills didn’t look quite as good, slowly moving through the gauntlet and not showing much in his brief time blocking but it was still a good day for him. Okonkwo has enjoyed a solid pre-draft process at the Shrine Bowl and at Thursday’s Combine. I think it’s fair to say he’s still an undersized, rawer prospect.

— UCLA’s Greg Dulcich furthered his case to be the top tight end taken. A well-rounded day offering size (6’4, 243, nearly 34 inch arms) and athleticism (34 inch vert, 10’2″ broad, 7.05 three cone and 4.7 40) while looking smooth in drills, plucking the ball away from his body. A little bit of work to do as a blocker, his feet stopping on a run-blocking drill against the sled but overall, a good day for him.

— Can’t go any longer without talking about Connor Heyward. All bias aside, a really nice workout for him. Solid 40 time of 4.72 and as I wrote about in my positional preview, he looked fluid in drills. Tracked the ball well with two catches over his shoulder and caught the ball cleanly throughout drills. He has real offensive value in the passing game and is worth a late Day Three pick.

— Those who did well in run-blocking drills: Colorado State’s Trey McBride, San Diego State’s Daniel Bellinger (regarded as a top blocker in this class), and Indiana’s Peyton Hendershot. SMU’s Grant Calcaterra struggled the most, unable to move the sled an inch after popping straight up on contact.

— Finally, disappointing many of the top tight ends didn’t run the 40. McBride, Isaiah Likely, Jeremy Ruckert and Charlie Kolar all opted against it despite all but Ruckert going through drills. In a tight-bunch like this, I want to see these guys compete.