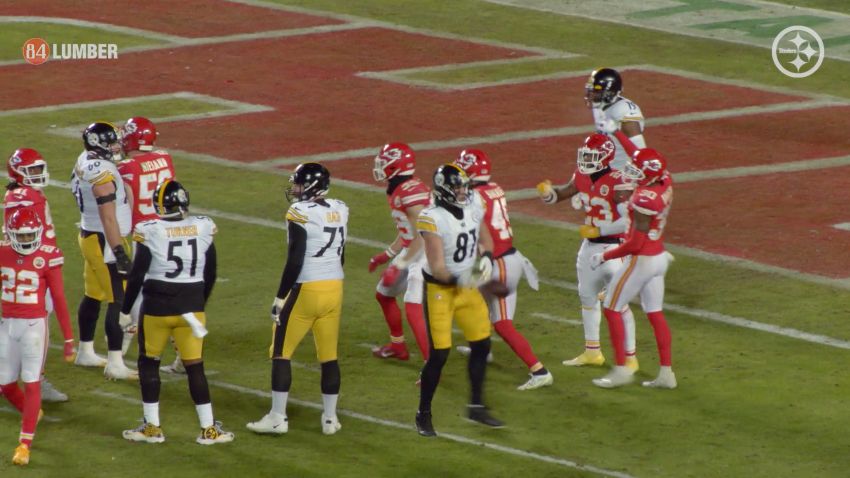 Zach Gentry surely knew that quarterback Ben Roethlisberger was playing in his last game, at least by no later than the waning minutes, on January 16. He had already all but said he was retiring. The Pittsburgh Steelers were trailing 42-21. Nothing but the most improbable turns of fortune could have prevented another outcome.

Still, they continued to play until the final seconds, and Gentry, the third-year tight end, caught all four of his passes during the game on Roethlisberger’s final drive. That included the future Hall of Famer’s final pass attempt of his career, officially an 11-yard first down with 11 seconds to go which would have set up a first and goal—had time not expired.

And he threw the ball to the officials.

“There was 11 seconds on the clock when we snapped the ball, and I was tackled on the field, and so I got up in a hurry. I wasn’t thinking about it immediately”, he recalled to Missi Matthews recently. “I threw the ball to the ref to try to get it lined up again”.

“I should have just held on tight to the ball, knowing that the time was gonna run out”, he said with slight regret. “I do remember there were three or four Kansas City defenders near the goal line, and for a fleeting second, I thought I should go airborne and try to score for [Roethlisberger’s] last one, but I made a business decision to stay down”, he jokes.

“I told him about that, and he said it was fine”.

But evidently nobody ended up with that football. At least, Gentry didn’t end up with it, the man who will forever be the answer to the trivia question, ‘Who caught the last pass that Ben Roethlisberger ever threw?’

Whether or not he becomes much more than that footnote will hinge a lot on the 2022 season, his fourth year in the league. Gentry barely contributed during his first two seasons, usually a healthy scratch, but he gained a sustained role in the offense in 2021, primarily as a blocker.

He could see a larger role in the passing game next season, working with fellow tight end Pat Freiermuth in combination and giving the Steelers’ next quarterback a couple of tall red-zone targets. Maybe he’ll catch the first pass thrown by some rookie—but he certainly won’t get to keep that ball.

So who does have Roethlisberger’s final pass? Was it preserved for Roethlisberger himself? Was it just stashed back into the ball bag? And who has the final touchdown ball caught by James Washington?