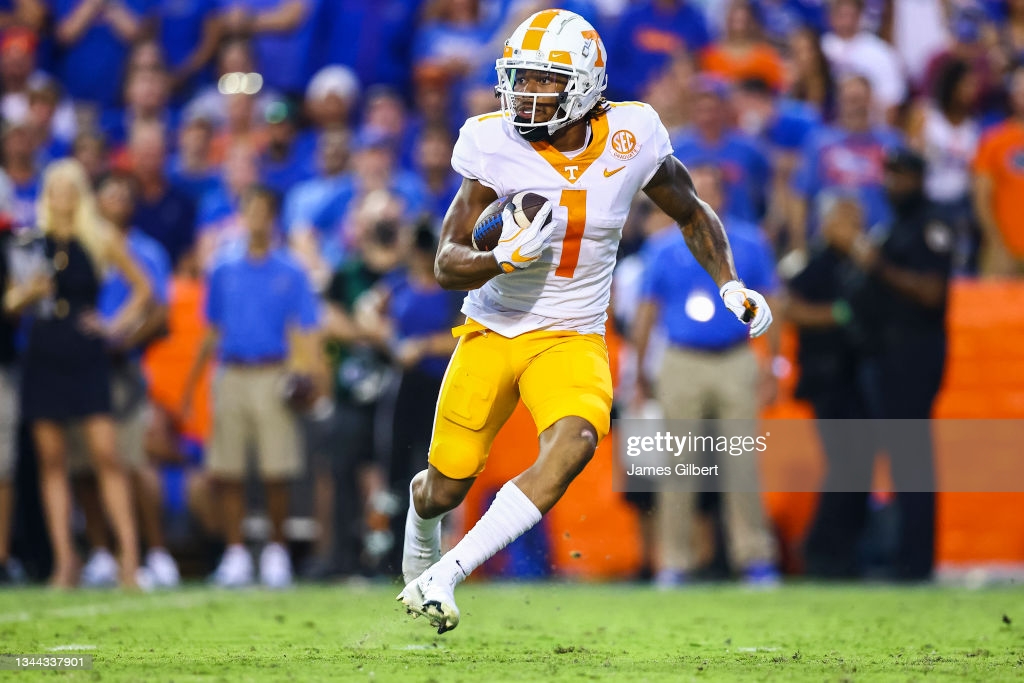 Tennessee wide receiver Velus Jones Jr. might be under the radar to some, but the USC Trojan transfer packs some serious speed to attack downfield. As one of the faster prospects at the Senior Bowl, I caught up with him to get his thoughts on the week ahead for him.

“First day of practice went well,” Jones said. “I’m still going through the process, you know, still learning this offense. But I feel like the first day was good.  I got my feet wet and I’m looking forward to it.”

The stress on wide receivers and quarterbacks to perform is unique at the Senior Bowl and similar showcase games. So much of each player’s opportunities is determined by an unpredictable variable. For quarterbacks, does his receiver run the right route or beat his man? For receivers, will the quarterback give him a chance to make a play and deliver an accurate ball?

Jones said he’s working with his quarterbacks on the American Team – Malik Willis, Sam Howell and Bailey Zappe – off the field to build chemistry.

“We’re just trying to get that timing down, you know, build this connection,” Jones said. “Especially outside of ball, like when we’re just out there in the lounge and stuff like that talking, you know, going over the plays together. It’s all about building the relationship”

Jones knows about learning new quarterbacks. He transferred to the Volunteers after spending four seasons with USC. With Josh Heupel’s up-tempo and downfield attack, Jones was able to take advantage of the scheme and churn out the best production of his career, setting career-high marks in all categories.

“Oh man, you know that’s what a receiver dreams for, you know to touch the ball that many times and I’m honestly blessed,” Jones said. “It definitely benefited me a lot. I was able to show the type of receiver I can be with the ball in my hands.”

Jones’s speed is something special, but he said he wants to prove he’s a playmaker when he touches the ball and that he can create separation with his routes.

Jones said he hadn’t met with the Pittsburgh Steelers yet, but should the team want to take a late look at him it’d make sense. He brings 4.4-range speed and kick return ability. On top of it all, with six years in the college football world, Jones has maturity and confidence.

I asked Jones how he handles the trash talking that often goes into wide receiver-cornerback battles. He said there wasn’t too much going on trash talk wise between the Senior Bowl guys, but his answer to his true approach leans heavily into substance over showmanship.

“People don’t realize, like, the physical standpoint and being a playmaker stuff, that’s half of the battle,” Jones said. “The other half of the battle, 50% is the mentality. It’s all mental. And so you know it’s however you want to take it. If you’re a guy that feeds off of that type of energy or you got guys like Amari Cooper, you know, I won’t say much at all. He’ll just show you up on the field.”

Speed and maturity are quality traits the Steelers will be looking for in receiver prospects. With the Steelers watching Howell and Willis closely this week, Jones has a chance to show his worth to the minds in Pittsburgh.