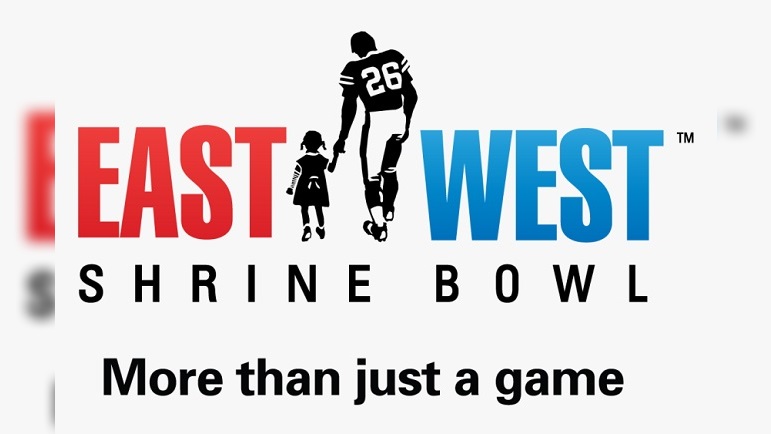 With the East West Shrine Bowl just hours away, it’s a good time to learn a little about the history of the longest running all-star football game and the cause that inspired it.  I had the opportunity to spend time talking with Shriners Hospitals for Children’s Bob Roller, National Director of Sports Management and Mel Bower, Chief Communication and Marketing Officer about the important work they do and how the game shines a light on that. 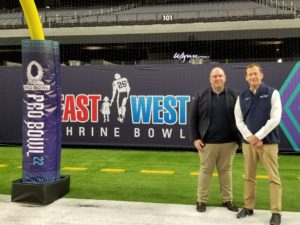 Bob Roller did his undergraduate years at Virginia Tech and then moved from sports information to athletic administration, serving as athletic director for two Division 1 schools before joining Shriners, where he was natural fit to run their national sporting events.  Mel Bower already had a master’s degree in public relations but was inspired to obtain a second master’s degree in divinity following the events of 9/11.  His focus was counseling and his goal was to provide a more complete and supportive environment for his colleagues at work.  His role with Shriners has been the perfect marriage of his skillset and their mission.

Mel shared the history of the Shriners Hospital for Children, which was founded in 1922:

“That was as a response to the polio epidemic, which was really sweeping through the country and throughout the last 100 years on that care has expanded to burns, cleft palate,  and spinal cord injuries. We currently have 21 facilities in North America, but we have over 150 access points through outreach clinics, as well as affiliations with other healthcare providers and have served over 1.5 million children to date and are excited as we look toward our next 100 years. Certainly care is evolving and changing very dramatically, but we are excited to have set a goal by 2035, we’ll have over 200 access points and that is throughout not only north America, but throughout the world.”

“We’re very proud to have treated patients from over 170 countries throughout the world. And we see ourselves not just as a north American entity, but as a global force for children. I’ve done quite a bit to intervene within world disasters, natural disasters, wherever children have had issues, orthopedics specifically, but also burns and have worked very closely with the US government, as well as other international allies, to either treat these kids in country or in some cases, if they were extreme, to bring in here to the United States. So over the past 100 years, we have a really proud legacy of serving kids from all over the world.  That certainly is a reflection of the Shriners themselves, the membership fraternity that founded the philanthropy, who is also a very far-reaching international organization.”

Bob then led me through the history of the game:

“The first East West Shrine Bowl football game was 1925. And so this is the 97th edition of that. It was founded to serve two purposes: to help the young men who are looking to go into professional football and most importantly to promote Shriners Children’s.  Throughout all these years, we’ve been very successful in implementing our patients in with the college All-Stars at each of the events.”

The event serves as fundraising source for the hospitals but the more important goal is raising awareness of the services they provide.  In years past, the athletes would actually meet with kids on the wards, but due to the Covid-19 pandemic, the Media Day event was moved to the stadium.  The players had a chance to interact with former Shriners patients and learn about their experiences.  The Pat Tillman Award, which recognizes a player who best exemplifies character, intelligence, sportsmanship and service, was presented to Notre Dame quarterback Jack Coan. The award is about a student-athlete’s achievements and conduct, both on and off the field.

The most significant change this year is the makeup of the East and West teams.  As Bob explained, it’s an evolution of this game.  Whereas 50 and 60 years ago, the country liked games like north versus south and east versus west, they organizers wanted to make it more competitive.  Athletes are no longer strictly assigned by the geographic location of their school.  Scheme and assignment are now factors, with one team running a 3-4 defense and the other playing a 4-3.  It avoided forcing players out of their natural positions and schemes.  It certainly made for more productive practices this past week and gave the players a better chance to shine and really show their skills. 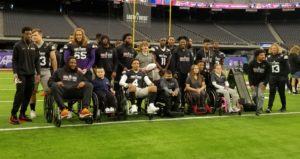 I asked both men about their favorite memories of past Shrine Bowls and Bob agreed on Mel’s answer:

“I think my favorite part of the game every year is…you’ve got these college Allstars that are looking towards their future. They’re not exactly sure what that’s gonna be. They come in thinking football, football, football.  [Then] they meet our patients, they engage with them, they hear their stories.  And it’s amazing to hear at the end of the week, how many of them are as much or more impacted by our patients as they are by the football experience.  Because our patients just have a wonderful way of reminding you that some of the challenges in life that we think are really difficult are not as difficult as we think they are, as they’re able to keep smiling every day as they face their adversity. It gives us a lot of perspective as human beings and watching that player patient interaction is I think always the highlight of the game.” 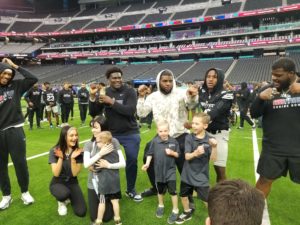 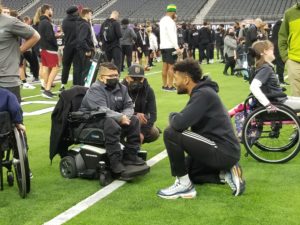 The East West Shrine Game’s slogan is “Strong legs run so that weak legs may walk.” That was on full display during the Media Day and that spirit lives through every Shriners event. 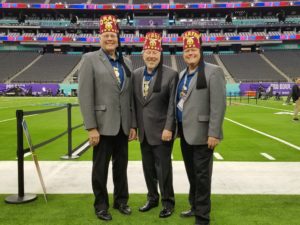