The start of the 2022 NFL league year is now right around the corner, and that’s when all teams must be salary cap compliant and when the signing of unrestricted free agents will commence. While that important date on the NFL calendar is indeed close, the Pittsburgh Steelers will likely be making quite a few moves related to their roster over the course of the next few weeks. With quite a flurry of moves expected to commence soon, it’s time to look at that Steelers’ current salary cap situation on this Sunday, especially with so much misinformation circulating right now on other blogs and Twitter when it comes to the topic.

For starters, we are now past one important date on the NFL calendar when it comes to the Steelers, specifically. That important date is the official voiding of the remaining contract years of quarterback Ben Roethlisberger, wide receiver JuJu Smith-Schuster and tight end Eric Ebron. Since the scheduled voiding of those additional years, there has been no word of any language changing when it comes to those three contracts. If indeed nothing has changed these last few days, that means that dead money for 2022 has now been produced for those three players.

As of today, Sunday the 27th, the Steelers should have 60 players still under contract for 2022 with one of those being cornerback Ahkello Witherspoon, whose year will void on the last day of the 2021 league year which is a little more than two weeks from now. 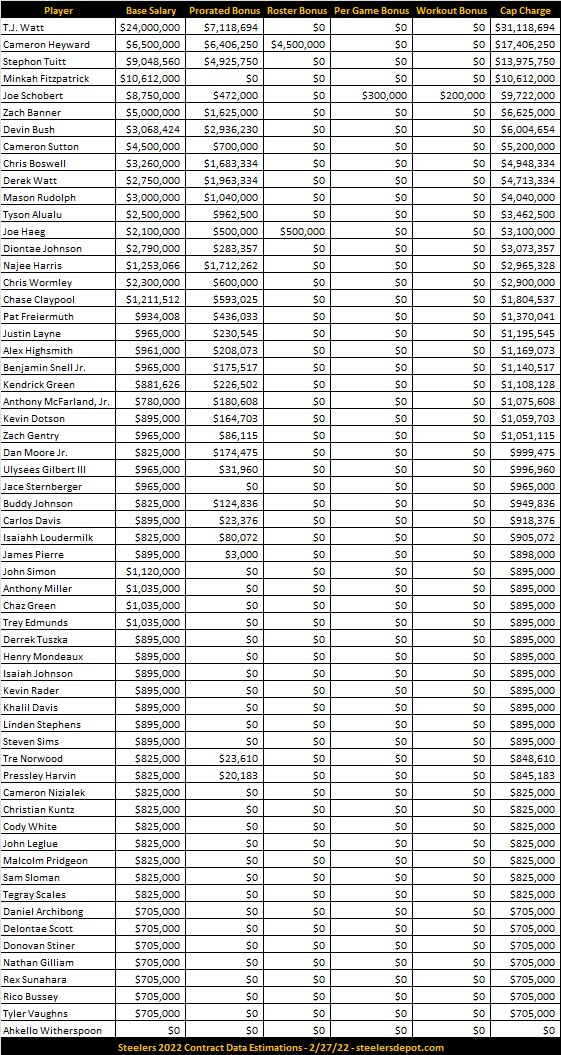 The Steelers’ top 51 cap charges at the time of this post are believed to be $163,962,980, and that number includes wide receiver Dontae Johnson receiving his Proven Performance Escalator raise that he earned through his first three NFL seasons.

The Steelers are now scheduled to have $22,414,424 in dead money on the books for 2022 at the time of this post and that number is expected to rise some in the next few weeks and as a result of a few likely contract terminations. That dead money number does include the expected dead money produced by the voiding of the Roethlisberger, Smith-Schuster, and Ebron contracts.
While it has yet to happen, the Steelers should soon be charged an offseason workout bonus placeholder amount of $849,600. That placeholder charge is standard for the offseason and normally put in place weeks before the annual NFL Draft gets underway. 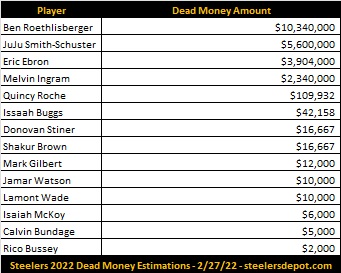 Per the latest NFLPA salary cap updates, the Steelers are estimated at being $28,749,228 under an expected 2022 salary cap number of $208.2 million. The league-wide number should be set prior to the start of the new league year, and likely even before the 2022 scouting combine ends. 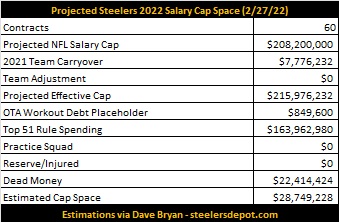 As you can see, the Steelers have plenty of salary cap space to work with between the start of the new league year and the end of the draft. In the next few weeks, however, we are likely to see a few contract terminations and maybe even a contract restructure or two that will produce even more salary cap space prior to the new league year getting underway on March 16. As previously mentioned, a few players currently under contract such as inside linebacker Joe Schobert and tackle Zach Banner might have their deals terminated in the coming weeks, or at the very least, negotiated way down when it comes to each’s paragraph 5 amounts. We could also finally know if defensive end Stephon Tuitt will remain under contract with the team by the start of the new league year. As for possible forthcoming contract restructures in the coming weeks, Steelers defensive tackle Cameron Heyward is as prime candidate for such with him being due a roster bonus on March 20.

The Steelers will also likely tender a few of their own restricted free agents in the coming weeks. In total, they have three players, quarterback Dwayne Haskins, inside linebacker Robert Spillane and inside linebacker Marcus Allen, scheduled to be restricted free agents. On top of that, at least one other player, center/guard J.C. Hassenauer, is likely to be tendered at a minimum salary amount as an exclusive rights free agent. When and if any of those players are tendered, each will enter the Rule of 51 and likely displace a player currently counted within it.

The Steelers will obviously have more future cap costs that they must cover, and most of those that are expected have previously been written about. For now, however, the team should be making several predictable moves that I have outlined in this post between Monday and the start of the new league year on March 16.