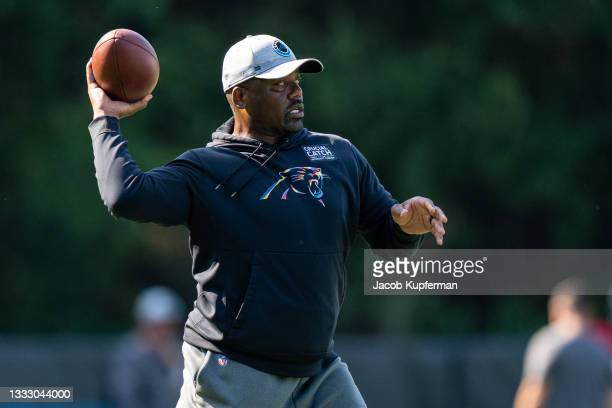 In pretty surprising news, the Pittsburgh Steelers have made Frisman Jackson their new wide receivers coach, the team announced moments ago.

We have named Frisman Jackson as our wide receivers coach.

The move comes without any announcement over previous WRs Coach Ike Hilliard’s departure. Hilliard is not referenced in the team statement but his name no longer shows up on the team website, so ostensibly, he is no longer with the team. He had served as WRs coach the past two seasons.

According to ESPN’s Brooke Pryor, Hilliard’s contract was not renewed, leading some players to be upset over the decision.

Ike Hilliard’s contract wasn’t renewed, per source. Still, it comes as a surprise. Hilliard was well-liked among the WRs and his departure was a surprise and upsetting to some in the locker room.

Jackson, 42, was a standout receiver at Western Illinois after transferring from Northern Illinois, where he played quarterback. Undrafted, he spent four years with the Cleveland Browns, catching 40 passes for 490 yards and one touchdown.

When Jackson played at Northern Illinois from 1997–1999, Canada was at that college program from 1998–2000 as the running backs coach.

Jackson inherits a wide receiver room from Hilliard that could look quite a bit different in 2022 as JuJu Smith-Schuster, James Washington, and Ray-Ray McCloud are all set to become unrestricted free agents this offseason.

In 2013, Frisman Jackson was hired as a wide receivers coach at NC State. Matt Canada was the offensive coordinator & quarterbacks coach there from 2013–2015. Eddie Faulkner was there as the tight ends/fullbacks/special teams coordinator starting in 2013 as well. #Steelers

Jackson is the first known outside coaching addition this offseason. The team will also at least need to fill its vacant offensive line coach opening, too.