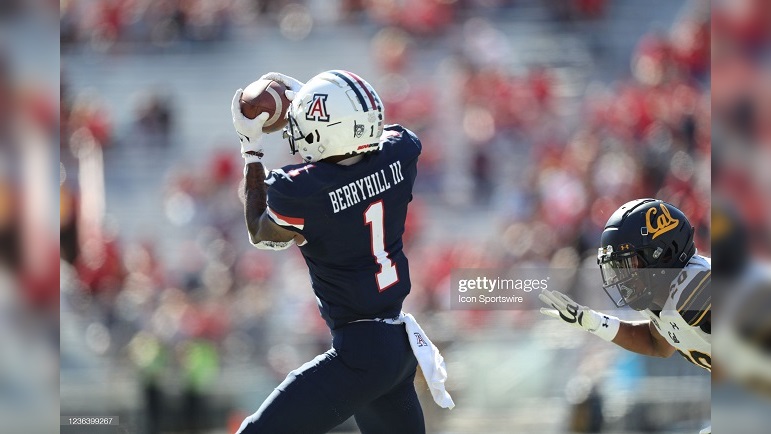 With free agency approaching, Steelers wide receiver James Washington is certain to find a new home elsewhere. It’s also not clear if the team will be able to make fellow wide receiver JuJu Smith-Schuster an offer good enough to stay in Pittsburgh. The Steelers have a long history of finding future stars on the second and third day of the draft and this 2022 wide receiver class is loaded with talent.

At the East West Shrine Bowl practices this week, it didn’t take long for Stanley Berryhill III to start getting noticed.  After watching him through 3 days of work, I had a chance to talk to him about his path to the draft.  Although Berryhill played three varsity sports in high school, he was always meant to be a football player. His father, who played football at the college level, had already decided that would be the goal before his son was born.

Despite that planned destiny, the Arizona native had to work for every opportunity. He attended Mountain View High School but wasn’t getting any attention from college scouts. He transferred to Orange Lutheran High School in southern California, where he had family.

A two-time captain as well as team MVP, Berryhill received scholarship offers for baseball but not football. Rich Rodriguez, Arizona Wildcats head coach at that time, encouraged Berryhill to enroll and join the team as a walk-on with the hope of earning a scholarship, which he received his first year at the University of Arizona. Rodriguez was fired before Berryhill’s took a snap but the new head coach, Kevin Sumlin, made good on that offer:
“I walked on one semester, was on scout team and giving the one to twos a really good look. And then I had a really great spring ball in 2018. And after that summer they put me on scholarship and just started getting more and more reps from there.”

The coaching changes didn’t stop there. Sumlin was fired in December 2020. Berryhill had entered the transfer portal but incoming head coach Jedd Fisch convinced him to stay. As Berryhill explained, Fisch made it clear that the wide receiver was an important part of his game plan. Coach Fisch went so far as to assure Berryhill that if he wasn’t happy with the team’s direction after spring ball, the coach would personally find him a new program to play elsewhere. Fortunately, that wasn’t necessary.

While the Wildcats haven’t racked up many wins, Berryhill has excelled. He led the team in receptions during the abbreviated 2020 season and again in a full 2021 season. His 84 catches ranked 2nd in the Pac-12. Working on special teams as punt returner, he had 19 returns for 156 yards with a long of 51 yards and earned 2021 All Pac-12 First Team (All Purpose) in addition to a 2021 All Pac-12 Honorable Mention as a wide receiver. Adding to his honors, Berryhill was nominated for the Burlsworth Trophy for the top NCAAF Division 1 player to start as a walk-on.

Perhaps the most meaningful recognition came from his head coach in the form of a jersey change to the number one, awarded based on character, work, and academic achievement: “Coach Fisch came in and said that nobody’s allowed to win number one, unless you earn it and got do it through community service, handling your school work, handling your on the field stuff and being in the community outreach and all that kind of stuff. And I’ve been doing that my whole life.” Watching Berryhill interact with the kids present on Media Day, all of whom have received care at a Shriner’s Hospital, it’s easy to see why he was chosen for that honor.

I asked Arizona Sun Devils star defensive back Chase Lucas, who has defended Berryhill since high school and through college, about Berryhill: “He has a great explosiveness. I feel like he has great catch radius. I also think that he runs great routes. I’ve always played against him, whether it’s on outside or inside. I love the rivalry that we have, but I also love him as a person, man. He’s always been a real good dude. Always been thorough and never showed no disrespect or nothing. And as a player, I feel like it shows on and off the field.”

Given the familiarity between the two players, I wanted to know if Berryhill had any tells, like the way former Steelers wide receiver Antonio Brown used to fiddle with his gloves when he was getting the ball. Chase told me that Berryhill is the only player he has gone against who doesn’t: “It’s weird. I haven’t [noticed], he’s the only one, honestly. I’ve always tried to kind of look at them or pay attention to some of these highlights to see what they do all the time and, you know, keep on going against him. He always switches up his stuff.”

As a rookie in the NFL, Berryhill’s special teams skills would certainly help him get a helmet on game day. He told me he prefers returning punts and playing gunner on kick return coverage, a role that Steelers fans saw WR Darrius Heyward-Bey fill well for years.

Berryhill had a great week of practice, catching virtually every ball that came his way. According to Zebra Technologies, who tracked the Shrine Bowl practices on the first two days, Berryhill was second only to speedster Baylor wide receiver Tyquan Thornton in the number of fast accelerations and no other wide receivers were close. Of course, this is just practice but it speaks to his consistency in effort.

Here are a couple of TDs from Day 3 of practice.  A long pass during a 2-minute drill and a short pass in 7-on-7:

He has not received an invitation to the Combine yet but hopes to make the final list following his week at the Shrine Bowl. As he prepares for the draft, Berryhill is training at EXOS in Phoenix with USC running back Keaontay Ingram and Miami Hurricanes wide receiver Charleston Rambo. As far as his expected 40 time? Berryhill smiled and told me “Sub 4.5…I think I’m gonna shock a lot of people, but sub 4.5 just to be safe.”

Given his history, it will be completely in character to surprise people with his performance. He’s been exceeding expectations since he picked up a football.