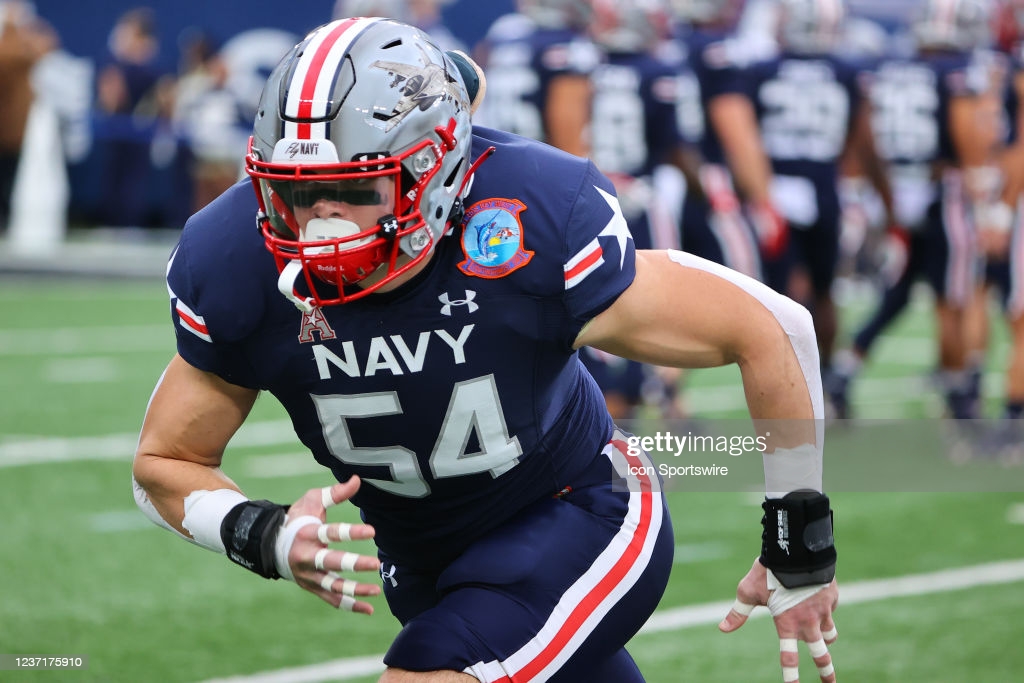 In the early years of the NFL, it was quite common to see a number of players holding down prominent roles at the level of professional football coming from the likes of a military academy.

Of course, there’s Dallas Cowboys’ Hall of Fame quarterback Roger Staubach, a Navy man, that comes to mind almost immediately due to his position and the role he played in Cowboys’ history. Former Army Heisman Trophy winner Glen Davis, known as “Mr. Outside”, played a few years with the Los Angeles Rams in the 50s, and then of course there’s the likes of former Pittsburgh Steeler and current Baltimore Ravens left tackle Alejandro Villanueva, a West Point grad himself.

Lately though, the opportunities are few and far between for military academy products in the NFL. As of late, just a few players from military academies such as the Air Force Academy, the Naval Academy and West Point are on NFL rosters.

I had the chance to speak with Fagot inside The Velvet Room at the Luxor Resort & Casino during Shrine Bowl Week in Las Vegas, gaining access to one of the most impressive defensive players that week at the Fertitta Football Complex in the heart of UNLV’s campus, as well as Allegiant Stadium, home of the Las Vegas Raiders.

As a four-year starter at Navy, Fagot helped carry on the tradition of leadership and determination for the Midshipmen under longtime head coach Ken Niumatalolo. While in Annapolis, Fagot recorded 282 career tackles, 35.5 tackles for loss, 9.5 sacks, 2 interceptions, 7 passes defensed, 5 forced fumbles and 2 fumble recoveries in 47 career games at Navy.

Loved this physical rep from @NavyFB @NavyAthletics LB @diegofagot54 Gives a huge pop to Rutgers' Isiah Pacheco, igniting quite the audible reaction from his defensive teammates. Matches his tape at Navy throughout his 4 years. Big fan. pic.twitter.com/8wrDa6tE3O

Oftentimes, Fagot was tasked with playing downhill with force in Navy’s 4-3 defense, helping set the tone in the front seven of the Midshipmen’s defense. Knowing that he played downhill a lot and wasn’t always asked to drop in coverage, Fagot knows he has a tough task in front of him to prove he can be a three-down linebacker in today’s NFL, which is something he was focused on displaying in Las Vegas throughout the four practices.

“I think part of it is the way that we’re designed to play on defense at the Naval Academy,” Fagot said. “I don’t really drop much in coverage. And if I do, it’s kind of like the middle of the field and not one-on-one stuff. So I know I definitely need to improve, and I’m aware of the fact that I need to work on my one-on-one stuff. Just like again, pass drops, things like that. But again, you know, that takes me to the the things I feel like I’m best at is just the effort piece of it. And just when I get there breaking glass when I get there, being a force certain…things like that.”

Being a force was something Fagot did routinely throughout the week, dropping the hammer on a few unsuspecting running backs in practice, and then laying the wood to Iowa State quarterback Brock Purdy in the game for a sack. Add in the vocal leadership Fagot displayed throughout the week as the leader of the East defense and it’s quite easy to see just how Fagot could fit onto a 53-man roster as a depth piece at the very minimum.

What a hit by @NavyFB’s Diego Fagot!

An extra sense of motivation carried him throughout the week, especially while wearing the block “N” of the Naval Academy everywhere he went in Las Vegas.

“I definitely feel like I have a long way to go just to get on the field,” Fagot said. “The 53-man roster is the goal that I have definitely circled and am trying to achieve. But it means a lot [to be here]. Obviously, it’s not about me at the end of the day. It’s it’s about the fact that I’m wearing Navy, I’m representing all my brothers that have gotten me this far representing everyone that’s really important to my life. So yeah, it just means everything to me, really just to be able to come out here and compete against some of the best talent in the country.

Even though he was on a level playing field with some of the best talent in the country, there was a clear chip on Fagot’s shoulder throughout the week, one that drove him to be one of the first ones on the field and the last one off routinely, sprinting in between drills, ensuring he was setting the tone for the rest of his teammates.

“You know, it’s something [the chip] I definitely carry,” Fagot said. “I mean, it’s a chip on my shoulder a little bit, because even here today, I still feel like I’m not getting as much attention than if I was at a different school. Um, But you know, it’s just the way it is, and I’m just gonna work as hard as I can. I’m gonna control things that I can control, like my effort, like running on and off the field, like being vocal and trying to lead the guys. Because again, that’s what I can do. That’s what I can handle. You know, I don’t get as much exposure as the next guy, like that’s just something that I’ll carry and it’ll make me mentally tougher.”

That chip has already carried him this far, having gone from a standout high school linebacker in Florida at Calvary Christian Academy who was lightly recruited before choosing Navy over the likes of Army, Central Michigan and Appalachian State. Spending the last four years at Navy, Fagot earned the respect and admiration of his teammates, earned the prestigious captain’s label at the Naval Academy for the 2021 season, and helped turn himself into a legitimate NFL prospect.

Though his true fit at the next level remains in question, there’s no doubt the type of locker room presence Fagot will be at his next stop.

On Navy’s crucial fake punt conversion in the 4th quarter, Diego Fagot had NO CLUE the ball was coming to him 😂 pic.twitter.com/wxbh1rsHlx

“Yeah, I think for me, it’s really just a culture piece. I feel like I have, through my time at the academy, understood what type of culture works, what type of cultures don’t and, hopefully to add into a culture for whatever team I’m at,” Fagot said. “That will be one big step for me and also just giving it my all, which is again…that’s all I can handle. That’s all I can control is just giving every ounce effort that I have for anything that I’m on, whether that’s special teams, long snapping, linebacker, whatever.”

While Fagot did not get an NFL Combine invite, the Midshipmen captain will have the chance to make his case for NFL scouts and executives one more time on March 30 at Navy’s Pro Day.