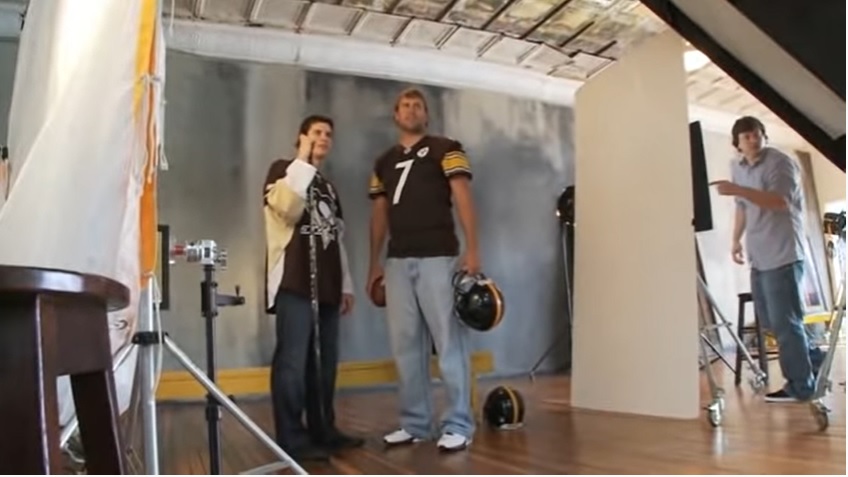 There’s nothing but offseasons ahead for Ben Roethlisberger. A month removed from retirement, Roethlisberger decided to recently put on the pads. But he swapped out football cleats for a pair of skates, hitting the ice with the Pittsburgh Penguins. In a photo posted by the Pens’ Twitter account, Roethlisberger is seen with Sidney Crosby, Evgeni Malkin, and Kris Letang.

Maybe the yellow jersey helps him stick out a bit more but that photo is a reminder of just how big of a man Roethlisberger is, towing over the rest.

I’m not sure if Roethlisberger had any background in hockey growing up, but as an Ohio native in those cold winters, odds are good he played the sport a little bit as a kid. He’s at least been an avid hockey fan over the years, attending several Penguins’ games, including their Stanley Cup runs.

Don’t expect the Pens to come offering a roster spot though. At 31-12-8 and tied for first place in the Metro, the hockey team seems to be doing quite alright.

Roethlisberger and Crosby have been iconic members of their franchise, turning the organizations around and winning multiple championships. The two have met up over the years. The header article is a photoshoot they did way back in 2009.

In other retirement news, Roethlisberger was spotted at a concert with Micah Tyler and others that helped provide over 10,000 meals to Pittsburgh’s homeless.

I will NEVER forget last night in Pittsburgh! Joined on stage at our show by my buddy @_BigBen7 as we closed out the #Differentshirt campaign with an absolute bang providing over 10,000 meals to homeless citizens of Pittsburgh with @lightoflife rescue mession! #HereWeGo pic.twitter.com/XAeQj3YQII

Awesome to see @_BigBen7 doing great things for his city! Keep it up man! pic.twitter.com/FXHMS6w1RQ

Roethlisberger is expected to largely be in the private eye in retirement, unlikely to get heavy into coaching (aside from his kid’s team, perhaps) or take the broadcasting route as many players – especially quarterbacks – have done. But it’s clear he isn’t exiting public view entirely and having fun in retirement. Hopefully the Steelers can have as much fun in their next chapter as they look for Roethlisberger’s replacement.