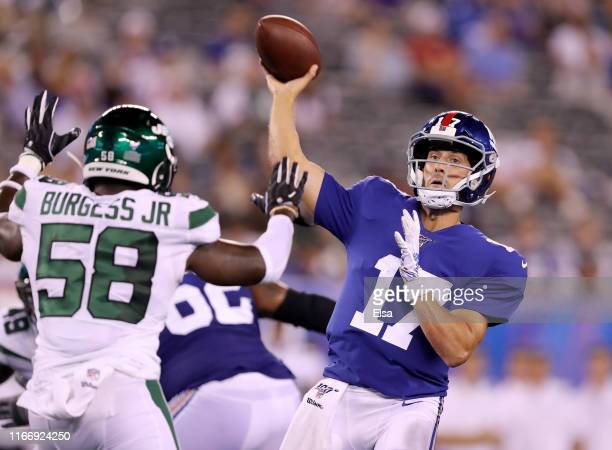 While most of the focus is on the 2022 NFL Draft set for late April, there was another football draft that took place Tuesday evening. The USFL held its draft of the revived league that includes the Pittsburgh Maulers, led by head coach and former Steelers’ RB coach Kirby Wilson.

With the league set to kickoff this spring, we may pop in from time-to-time with updates on how the team is doing. But first, get familiar with the names who will be on the roster.

Naturally, quarterbacks went at the top of the draft, though the draft rounds appeared to correspond to specific positions. The Maulers had the 7th overall pick and took Lauletta, a 4th round pick out of Richmond by the New York Giants in 2018. Lauletta appeared in two games as a rookie, going 0/5 with an interception. Following his time with the Giants, Lauletta has bounced around with a flurry of teams including the Eagles, Falcons, Jaguars, Browns again, before being drafted by the Maulers.

Lauletta showed off the Maulers’ uniform after his selection. All the top quarterbacks were invited and on-hand for the draft.

Kemp was a standout player at Michigan. Undrafted, he spent time with Green Bay and Denver before becoming the Maulers’ second round pick. Defense and specifically pass rush was a heavy focus of the Maulers’ draft plan, selecting Player and Assoua with their third and fourth round picks. Player has a solid career at East Tennessee and briefly spent time with the Tampa Bay Buccaneers. Assoua spent four years at Western Michigan from 2015 to 2018, recording 11 career sacks.

Pittsburgh went offensive tackle with their next three picks. Okeke was a top recruit out of LSU who transferred to Tennessee State and earned some draft buzz from us back in 2019 while Battle was a 5th round supplemental pick of the Rams back in 2015, though he never started a game. Baldwin was another top high school recruit, a five-star prospect who spent time at Alabama and Kansas before transferring and settling at Youngstown State.

The Maulers focused on their secondary in rounds eight through eleven. Harris hails from USC as the Trojans’ nickel corner. He may slot in the same role in Pittsburgh. Bonds was a UDFA from Tennessee State who spent the bulk of his NFL career with the Baltimore Ravens, appearing in four games. Robinson was a playmaker at Tarleton State who had three pick-sixes in 2019 while McClain-Sapp comes from Marshall who spent time with the Kansas City Chiefs.

They finished out their draft the way they started by selecting a quarterback, taking San Jose State product Josh Love. Love threw 43 touchdowns for Spartans and helped turn the team around, leading them to a 5-7 record in 2019 after the team won just one game the year prior. Love’s briefly spent time with the Rams and Browns.

The USFL season will kickoff April 16th in a game between New Jersey and Birmingham. The rest of the schedule has yet to be announced. Though Pittsburgh has a team, all regular season games will be played in Birmingham this season with the hopes of playing in local markets in 2023.

If you want to hear more about the Maulers, let us know in the comments below.