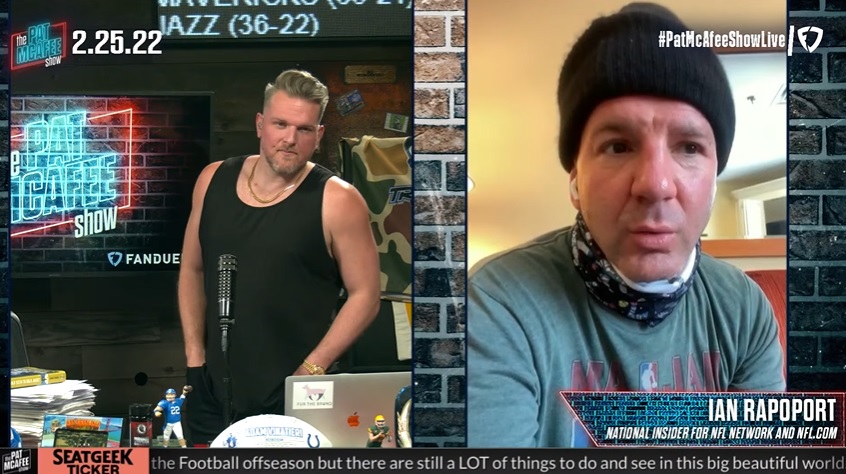 No one knows where Houston Texans’ QB Deshaun Watson will wind up. The Pittsburgh Steelers, though, are an unlikely destination. Still, despite Ian Rapoport downplaying the idea, he did offer the so you’re telling me there’s a chance view on Watson’s odds of being traded to Pittsburgh.

Rapoport joined The Pat McAfee Show Friday afternoon and was asked if Watson’s odds of becoming a Steeler are boosted by the Brian Flores’ hire.

“I will not say no,” Rapoport led off.  “It would be very unSteeler-like to go out and spend three first round picks plus on a quarterback. It’s something they have almost never done. But not never. Because they got Minkah Fitzpatrick for a one and that was a fantastic trade. One they’d probably do again.”

Pittsburgh surprised most when they traded for Fitzpatrick prior to Week 3 of the 2019 season shortly after QB Ben Roethlisberger was lost for the year. The Steelers gave up a first-round pick to acquire Fitzpatrick, an almost unheard of move by the organization. It resulted in the team not making a first-round pick in the draft for the first time since 1967.

Watson was strongly rumored to land in Miami in part due to his desire to play for Flores. The deal reportedly fell apart at the trade deadline, keeping Watson on Houston’s bench the rest of the season. Pittsburgh hired Flores as a senior defensive assistant last weekend.

Rapoport went on to say the next Steelers’ GM would be a factor in how aggressive they’re willing to be.

“Some of it depends on who the next GM is and where they are in that.”

The Steelers announced they won’t hire Kevin Colbert’s replacement until after the 2022 draft. The earliest that’d come is the first week of May. It’s entirely possible Watson has found a new home by then, especially given recent reporting teams would be willing to trade for him if only his criminal, not civil, matters have been resolved.

Rapoport did opine the Steelers would be a great landing spot for Watson.

“But it would be a fantastic place for Deshaun Watson. It’s a great fanbase. The team is good, they’re always good. They’ll put you in a position to win and everyone loves playing for Coach Tomlin.”

Rapoport’s information is speculative and shouldn’t be considered a real and true report. But it’s obvious he’s not hearing anything about the Steelers actually showing interest amid other reports of teams doing their homework.

“Is it likely? Probably not. But I would never rule anything out when it comes to getting a quarterback, the most important thing you can do.”

Pittsburgh certainly needs a quarterback and if they want to acquire a long-term option, whether that’s through the draft or trade, they will have to be aggressive.