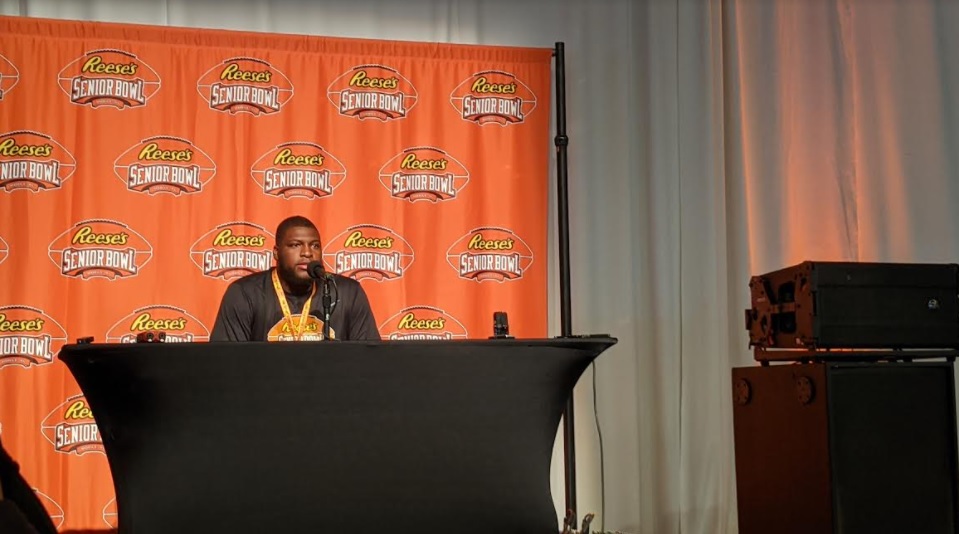 Phidarian Mathis, known for a forward personality with tremendous leadership skills, had his moment to speak in the opening media sessions of Senior Bowl week.

Mathis comes into the event ranging in the second to third round of projections, but eyes are locked on him to see if he can make himself some money before April’s Draft.

“I think playing at Alabama has gotten me ready and prepared me for this opportunity,” Mathis said. “I just gotta go out there and be myself and do what I do.”

Much is made about the practices at Alabama being more difficult than some games. It’s an “iron sharpens iron” mentality in Tuscaloosa on a daily basis. But with that comes a dose of reality that waiting for opportunity is often a struggle of the process. But “Phil” Mathis knows all about the process. It’s a standard at Alabama.

“I had to learn how to be patient,” Mathis said. “As a young guy I didn’t understand you know, getting playing time I had to be patient. I’ve learned a lot and it’s served me well.”

Senior Bowl director Jim Nagy introduced Mathis and added beforehand that patience had to play a role for the 6’3”, 313 lb. defensive lineman.

“We had him in the fourth round, good player, but man he took a really nice jump this year. He really did,” Nagy said. “In terms of the interior D-Line, he moved up about as much as anyone for us in that group. He’s not just a two-down player. Every team is looking  for guys who can get upfield and rush the passer, affect the quarterback from the inside. Phil can do that.”

Mathis will have the opportunity to showcase his pass rushing abilities that has so many scouts intrigued. Nagy joked that Mathis must be “licking his chops” for one-on-ones this week. But it’s for good reason, as the trench talent in Mobile this week will give everyone in attendance a good representation of the latest Alabama has to offer to the league on the defensive front.

As that transition to the next level begins today for Mathis, the molding that cast him as a true commodity in this year’s draft still holds its value.

“[Those] memories are gonna be stuck in my head for a lifetime,” Mathis said. “Let’s just say I accomplished so much at Alabama, it’s just a pat on the back. But the memories I made, nobody can top that. It’s always going to be with me.”

While Mathis heads to Hancock Whitney Stadium to get practice underway (especially those one-on-ones), more memories are set to be made for a prospect that brings an intriguing passion and energy to the game.