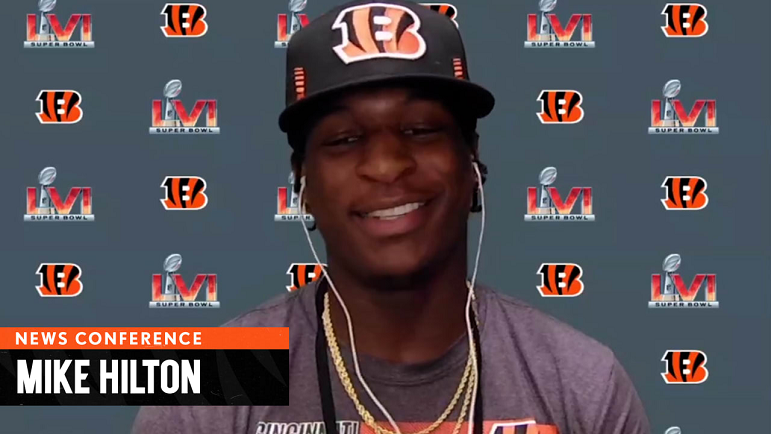 One year after leaving the Pittsburgh Steelers for the cross-division rival Cincinnati Bengals in free agency to the tune of a four-year, $26 million deal, slot cornerback Mike Hilton couldn’t be happier with the decision.

Though Steelers fans and teammates remain upset that Pittsburgh let him get away, Hilton — who is set to appear in his first Super Bowl Sunday at SoFi Stadium in Super Bowl LVI agains the Los Angeles Rams — says there’s no hard feelings after the Steelers let him walk in free agency, losing a key member of a defense that was one of the best in football in 2019 and 2020.

Mike Hilton with a pick-6 against his former team! #RuleTheJungle

Speaking with reporters Thursday during his media session ahead of the big game, Hilton praised the number of free agents that the Bengals brought in last offseason that ultimately led to a Super Bowl, while also thanking the Steelers for giving him an opportunity and developing him in to the player he is today, according to video via Bengals.com.

“First question, you know, it, like I said before, it’s guys buying in, guys coming in, wanting to put their selfishness to the side to help us win,” Hilton said to reporters regarding the key to all the new faces working together to lead the Bengals to the Super Bowl. “And we knew with the guys we had, like I said, with the coaches we had, you know, we could be in this position right here. And guys really bought in to that and really believe that. So, I knew once I got here and just talked to them and really got to know them, I could just see how bad they wanted things to turn around and, you know, just be in a position we are in now. So, knowing it happened this fast, I’m not surprised, and you know, it is exciting to see what the future holds.

“And part two, no, there’s no hard feelings for them [Steelers],” Hilton added. “I know the name of the game, and I’m always appreciative for them giving me my opportunity to be here. You know, I still talk to some of these guys to this day. So, it’s like, it’s no bad blood between me, the coaches, the front office, the team, my ex-teammates, we’re all still cool. And like I said, I appreciate everything they did for me.”

There might not be any bad blood or hard feelings, but the two games against the Steelers in 2021 meant more for Hilton, who played with an even larger chip on his shoulder those weeks and helped lead the Bengals to two blowout wins, eventually helping the Bengals win the AFC North for the first time since 2015.

Hilton recorded a pick-6 off of Ben Roethlisberger in the 41-10 win in Cincinnati, and was also caught on camera waving goodbye to Steelers’ fans in the 24-10 win over Pittsburgh in the Steel City.

“I’ll be honest, definitely those two wins were definitely big for me. The guys knew, you can ask them,” Hilton said regarding the two games against the Steelers last season. “They could tell both weeks that we played those guys, like my mindset was different. You know, I was just locked in and like really, really pushing guys a lot more just to show, like, all right guys, like, if want to take this division over, it’s going to start with Pittsburgh. You know, they’ve been known to run this division. And, you know, them bringing me over, like I said, I had the insight on what Pittsburgh thought of Cincinnati and telling those guys and just getting them riled up and knowing like, yeah, we’re this close, but we have to finish it.

“So, we kind of knew coming into those games, to run the AFC North, we’ve got to defeat those guys. And we did that handily. So, like I said, I’m excited to see how it goes for the next couple years and see where we’re at.”

Now that they’re in the Super Bowl, the Bengals clearly have the upper hand moving forward, at least for the time being.