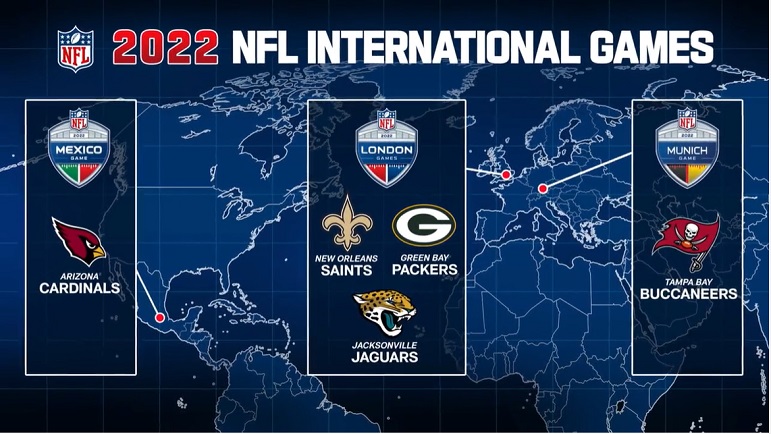 While the NFL is set to play multiple international games in 2022, the Pittsburgh Steelers will not be involved in any of them, according to news released on Monday by the league.

With 2022 NFL game locations of London, Munich, and Mexico City all scheduled, the league announced on Monday five teams who will be hosting games internationally. None of those five hosting teams, the Arizona Cardinals, Green Bay Packers, Jacksonville Jaguars, New Orleans Saints, and Tampa Bay Buccaneers, are on the Steelers’ 2022 road schedule.

The Steelers are scheduled to play the Saints and Buccaneers during the 2022 regular season, but those two games will take place at Heinz Field in Pittsburgh.

The Packers will make their first international trip in 2022, becoming the 32nd NFL team to play in London since 2007. The Saints will play in the UK for a third time. The Jaguars, on the other hand, previously announced that they will play a home game at Wembley Stadium in 2022.

Last year, as part of the NFL’s expansion of the regular season to 17 games, it was announced that beginning with the 2022 season, up to four of the teams from the conference whose teams were eligible for a ninth regular-season home game would instead be designated to play a neutral-site international game each year.

The Steelers’ extra game in 2022 will be played on the road in 2022, with that opponent being the Philadelphia Eagles.

Steelers president Art Rooney II has said multiple times in the last several years that he would like to see the team play a game in Mexico in the near future as there is a strong section of the fan base in that country.