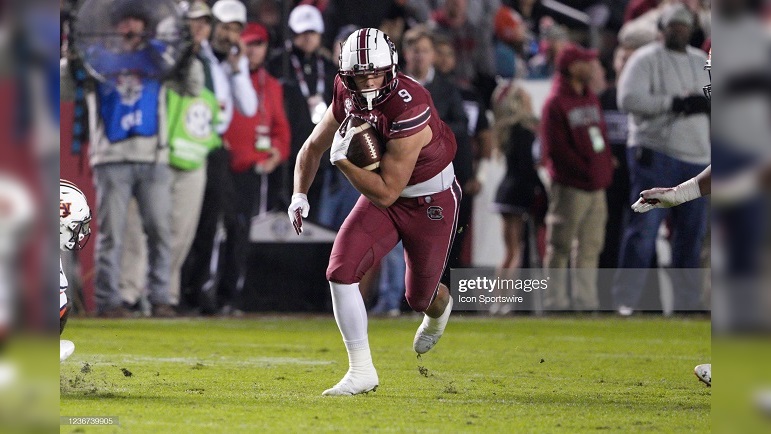 When the first day of Shrine Bowl practices got underway, I was on a mission to identify the best talent here in Las Vegas at the defensive back position, my traditional position of expertise in scouting. Thus, I decided to pay particularly close attention to the first WR/DB 1v1 session. Enter Nick Muse, standing at a towering 6’5” 260 pounds, and tormenting the East squad’s safeties with a unique combination of high-level route running, physicality to release at the second level, and impenetrable grip at the catch point.

Over the next four days, I witnessed the South Carolina product win in a variety of ways, including crafty route running to beat man coverage in short areas, an understanding of how to find windows in zone coverage, and repeatedly hauling on contested catches with defenders draped all over him. In the red zone, Muse has proven to be particularly effective, providing a big target, sure handed target, able to shield defenders with his large frame and absorb hits with ease to secure some impressive contested catches.

The younger brother of current Seattle Seahawk and a former All-American safety at Clemson, Tanner Muse, Nick spent two years at Mike Tomlin’s alma mater, William & Mary, before transferring to South Carolina ahead of the 2019 season. Muse admittedly didn’t receive as many opportunities as he may have liked as a pass catcher in the SEC, finishing his three years in Columbus with 67 receptions for 805 yards and 3 touchdowns. Nonetheless, he has inarguably made the most of his larger target share here in Las Vegas, repeatedly serving as the premier target for the Eastern squad’s quarterbacks in red zone team sessions.

Beyond red zone work, he’s shown some explosive play ability, first with a 20+ yard catch working up the seam in the soft spot of the Cover-3 zone, and later getting open up the sideline on an out and up in the soft spot of a Tampa-2 zone, both of which resulted in touchdowns from Brown’s E.J. Perry. While he stated he’s committed to improving both in the pass and run blocking departments as he transitions to the NFL, Muse has a unique combination of wiggle and sure handedness for a player of his stature and should be ready to contribute as a pass catcher immediately at the next level.

In relation to Pittsburgh, Muse’s connection to Tomlin’s alma mater in William & Mary, NFL bloodlines with a brother, who was recently a third-round pick in the 2020 NFL draft, and prototype size at the position check a lot of boxes in connection to the team. While tight end isn’t exactly at the top of the list of needs for Pittsburgh, Muse’s ability as a pass catcher would undoubtedly help the Steelers as they transition to using more 12 personnel in the post Ben Roethlisberger era.

He referenced tight end Pat Freiermuth as a player he watches at the NFL level, and needless to say, they could present nightmares for opposing defenses as a pass catching duo in the red zone. Below I have a full transcription of my audio interview with Nick Muse, which took place after Day 2 of Shrine Bowl practice.

Owen: How do you feel your first couple days of practice have gone?

Nick: Good. I feel like I’ve definitely matured in the run game. It’s something that I need to focus on, and my routes are taking care of themselves. I didn’t get a lot of opportunities at school, but this is definitely a week where I’m going to get an opportunity where I’m going to see the ball a lot more. So, proving that I can catch the ball and make people miss is definitely something that I’m focusing on this whole week.

Owen: Yeah, absolutely. And I do a lot of defensive back analysis. That’s where I play in college so it’s traditionally what I focus on. So, I was really focused on the wide receiver/defensive back 1v1s this week. I noticed you’re pretty good with those second level releases against the slot defenders, just using your physicality and size. Do you wanna talk a little bit about where you learned that from?

Nick: I honestly think it was God-given. I’ve always had that little wiggle, you know, one-on-ones. And I’ve always had the football IQ understanding, you know, man vs. zone and how to beat certain things. You never want to do the same move twice, especially against a good DB. I’ve got a couple tricks up my sleeve, so I definitely like taking advantage of something that people don’t normally see, especially from someone who’s 260 pounds, but still has a wiggle that not many people actually have.

Owen: Absolutely, who are some guys you watch at the NFL level, just kind of trying to model your game after at the tight end position?

Nick: Obviously, you know, the main guys Mark Andrews, Travis Kelce. Even Pat Freiermuth sometimes. He’s a stud. [George] Kittle is definitely one of those guys who you go watch in the run game and in the pass game. He’s an all-around tight end and I would like to establish myself as the same type of player.

Owen: For sure. Going against some SEC defenses, you got to see some 4-3, you’ve got to see some 3-4. Do you want to talk a little bit about the differences between blocking like 3-4 outside backer vs a 4-3 hand-in-the-dirt defensive end?

Nick: Every week you’re going against the NFL talent, it doesn’t matter the team. Also, every week you’re going to see something different. You know, teams like Kentucky run the same stuff throughout the whole game. So, some you’re more used to, but they have the talent to stop certain offenses. And then you’ve got teams like Tennessee and Georgia, who mix it up sometimes and they’ll move, they’ll shift and a nine technique that I’m supposed to block out goes into a five-technique, who now I have to take down and basically go to the backside linebacker with him. So, just seeing different things from different teams, you got to be prepared for everything. There’s good players there. So, even when you’re prepared, you still got to win the one-on-one and that’s something that’s hard to do, but I feel like I did a pretty good job of it this year.

Owen: Going back to this week, have you found any tough matchups specifically on the defensive side with guys you’re running against or guys you’re blocking this week?

Nick: Definitely. The safety from Middle Tennessee and I’m not sure his name, but the UCLA safety. Both, both of them look very superior out there compared to the guys they’re working with. But they both have high football IQ, and they know what’s happening. They’re guys that aren’t fooled by a naked or something like that. So, just going against them and understanding that they have the same brain concept that I have. So, you got to be prepared for anything they do. And you’ve just got to beat them physically one-on-one or mentally as much as possible.

Nick: So, I didn’t play tight end until college. I wanted to play tight end at my high school, but we were a triple option team. So, you know, they didn’t really give me an opportunity until senior year. They just threw me out there at wide receiver and said, third and 10, they know it’s coming, make a play against two defenders, see what happens. But I was mainly a linebacker. I had like 340 tackles and 15 interceptions. So, I was definitely good at getting to the ball and understanding where the ball’s going. But, yeah, I’ve got an older brother who’s a role model. So, every time I woke up was a new day to play sports and compete against him. Around six years old is when I really started playing football back in my hometown. So, just growing up with the same type of kids and understanding that I’m a superior athlete compared to most of them. So, that definitely felt good growing up because I worked against people who were two or three years older just about every day of my life.

Owen: Have you gotten a combine invite yet?

Nick: I did not. I got one last year. I decided to come back to school, mainly to play with no brace and I felt like I’d get a little bit more opportunity. Certain things didn’t go my way, but no, I did not get an invite this year.

Owen: Looking toward your pro day, are you working with any coaches while training for that?

Nick: I’m down at XPE in Fort Lauderdale with Matt Gates and Tony. Those are two guys who teach speed and know speed. So, I feel like I’ve definitely been eating healthier and getting my body in shape and getting it primed for my pro day so hopefully I can lower my 40 time a little bit, and trim some time off. Hopefully if that’s the case, then I’ll look good when I’m there.

Brown QB EJ Perry with a nice ball to South Carolina TE Nick Muse. Perry would be in the running for second best QB showing at the Shrine Bowl for me. pic.twitter.com/jvkcEGoExE

Owen: Last one here, what are a couple things you’re trying to look to improve on is this week continues and then even going into  your rookie season at the NFL level, the one to two things where you’re like I’m a good player right now, but I could really hone in on the craft if I improved in these areas?

Nick: Run blocking and pass blocking. Like you said, my routes are pretty good. Every day I need to work on those, but those are what I can survive on. I need to figure out different ways to run block, staying off my toes, and understand that I have the power. I don’t have to rush into things. So people don’t snag me and put me in the dirt. But just sticking with the technique of pass blocking and run blocking. I had to knock the rust off the first two days we were here, kind of looked bad as a pass blocker, but it comes the time where sometimes you get beat. Not everybody’s perfect. So, you got to get up and do it again. That’s something that I’ve been doing this week. And if I can get those two things down, I think I’ll have a hell of a time in the NFL.

Owen: Absolutely. Well, you are turning a lot of heads out there, Nick, just keep doing it and I appreciate your time.

Nick: Well, sir, appreciate you. Thank you, man. Thank you very much.

Regardless of need, in the modern NFL in which offenses are becoming less position oriented, it is always a plus to have players who can create mismatches for opposing defenders. Moreover, for a Steelers offense which ranked 22nd in the NFL in red zone scoring percentage this past season, adding a large, framed player who can win against both man and zone in the red zone certainly fills a need. Wherever he lands this spring, I’ll certainly be monitoring Nick Muse’s progress at the next level, and quietly rooting for his success.