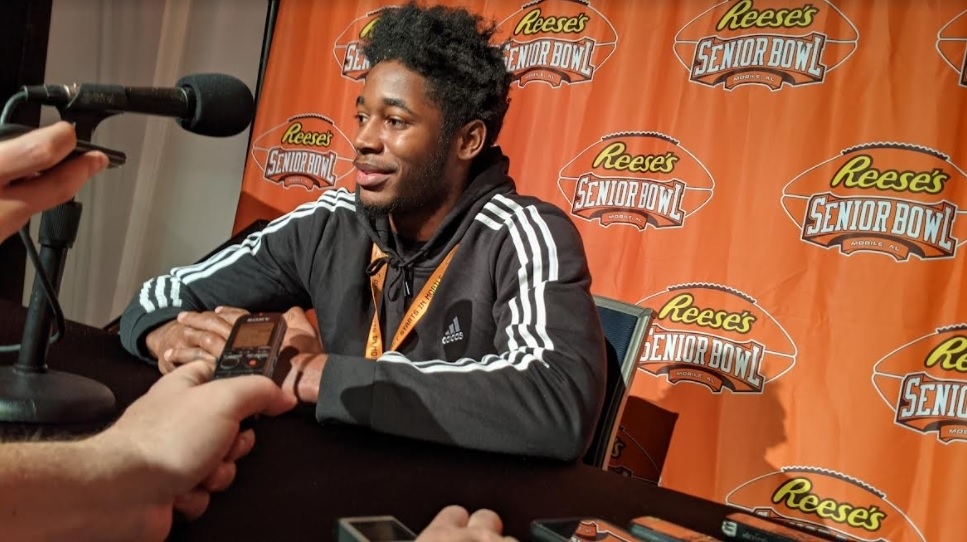 How good do you have to be to lose count of how many touchdowns you scored in one game? Romeo Doubs isn’t quite sure where he lost track, but he knows where he ended up when after one performance at Jefferson High School. A whopping eight-touchdown performance, an all-timer for his school.

It was games like that which helped put Doubs on the college radar, end up at Nevada, and begin his NFL dreams. His Wolfpack career ended this past weekend at the 2022 Senior Bowl, but he took a moment to reflect on getting to that point. And also remembering back on that eight-score game at Jefferson High.

“It was just ‘give Romeo the ball’ and just let him do his work on the football field,” he said in a podium interview during Senior Bowl week. “I didn’t really know I had that many touchdowns until after the game. So it was a blessing.”

Giving Romeo Doubs the ball worked well in high school and in college, finding the end zone 27 total times for the Wolfpack, 26 through the air and a punt-return touchdown, an 80-yard score on his first ever collegiate touch. His last two years were his most impressive, back-to-back 1,000-yard seasons, even though he played in just nine games in 2020. Both years, he was a First Team, All-Mountain West selection.

But for all the accolades, Doubs carries a humble attitude, ending each answer with “sir” and even being hesitant to talk about his incredible high school performance. In a world where receiver’s egos are as large as the plays they make, Doubs is the anti-diva. More Larry Fitzgerald than Terrell Owens, the impact plays of a wideout with the workmanlike attitude of an offensive lineman.

“I was always told to just keeping climbing mountains. Because failure is temporary. So is success. It’s important for me to just keep my head down and be able to work on the things that I need to work on to be a successful young man on and off the field.”

Doubs impressed at the Senior Bowl, a thickly-built frame with the ability to quickly get in and out of his breaks while catching the ball with ease. He was one of three Nevada players at Mobile last week, joining his QB Carson Strong and TE Cole Turner.

While Doubs may speak softly, he know his game carries a big stick.

Versatility is one thing he’s doing to become that complete receiver. An outside receiver in college, the National-team coached New York Jets gave him reps in the slot during the week, one of several adjustments Doubs needed to make to prepare for the pro game.

“The biggest adjustment playing inside biggest different in the slot is just how patient that you have to be. Sometimes playing outside, you have to run a route at a specific time than you do in slot in regards to the timing of the specific plays.”

With a solid showing in Mobile, Doubs has played his way into Day 2 territory. His testing is unlikely to wow at the Combine, but the tape doesn’t lie. And for a Steelers team looking for a tough, physical receiver who can make contested grabs, especially if JuJu Smith-Schuster leaves, Doubs is a name to watch.