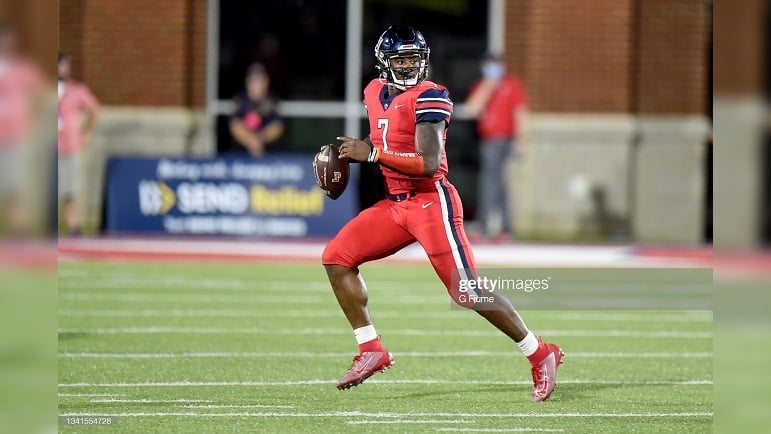 With the annual Senior Bowl now behind us and Super Bowl LVI about to take place on Sunday, the next major event on the 2022 pre-draft calendar will be the annual scouting combine. Between now and the 2022 NFL Draft, however, we’re sure to be bombarded with several more mock drafts from the major media sites and that includes NFL.com, who released a new one on Tuesday by analyst Lance Zierlein.

In Zierlein’s first mock draft of the 2022 season he has the Pittsburgh Steelers picking Liberty quarterback Malik Willis with the 17th overall selection in the first round after trading up three sports to do so.

Here is what Zierlein wrote about the Steelers selection of Willis in his first mock draft of 2022 after a trade up of three spots with the Los Angeles Chargers:

“Willis might not have played for a traditional college football power, but he is hard to bring down, can extend plays and has the arm to attack all areas of the field. The Steelers move up for their next starting QB.”

Zierlein mocking Willis to the Steelers on Tuesday isn’t overly surprising and especially on the heels of what all transpired last week at the Senior Bowl. While in Mobile, AL for the annual Senior Bowl last week, the Steelers reportedly spent a lot of time talking to not only Willis, but his parents as well. Those interactions produced quite a bit of buzz which was ultimately labeled as the Steelers love for Willis being the worst-kept secret of the Senior Bowl week.

Considered a top quarterback in this year’s draft class, Willis admitted last Wednesday morning that he talked to Tomlin after Tuesday’s practice in Mobile.

Of all the quarterbacks in this year’s draft class, Willis appears to be the most athletic and thus the most mobile. While still very raw coming out of college, and especially when it comes to him reading defenses and making anticipatory-like throws, Willis seemingly has the highest ceiling when it comes to the quarterbacks in the 2022 draft class. He might, however, need a year on the bench as a rookie, if at all possible.