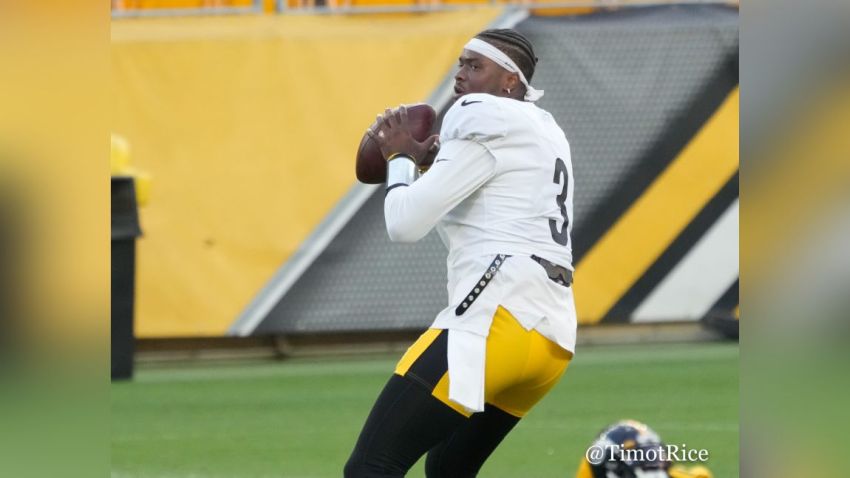 Dwayne Haskins has put on a uniform for a meaningful game exactly once within the past year. He has played precisely zero snaps, and thrown zero passes, in meaningful games during that time. He is also healthy. And yet he was a first-round draft pick just three years ago.

The former Buckeyes standout had a bit of an ugly divorce with the Washington Commanders, the team that drafted him two names ago in 2019, cut by the end of his second season. He signed a Reserve/Future deal to get a shot with the Pittsburgh Steelers last January.

Knowing, most likely, that there would conceivably be an open competition for the quarterback job this year. It was a very open secret that the 2021 season would be Ben Roethlisberger’s last, and Haskins knew nobody was going to sign him to start. So the first step back is getting in the door and finding an opportunity. He has one in Pittsburgh, if he can live up to it.

“Dwayne Haskins came in to get some nice things done throughout the season as a scout team quarterback, he played some in the preseason, and we’re excited to see what Dwayne can provide either from a competition (standpoint) or maybe he evolves into a starter”, general manager Kevin Colbert said yesterday, according to Bob Labriola for the team’s website.

A pending restricted free agent, he made it pretty clear that he expected the Steelers to retain Haskins, who should be easily kept on an original-round tender, since that would provide them plenty of protection. As a former first-round pick, for those who might not be aware of how things work, a team would have to be willing to give up a first-round pick in order to sign Haskins to an offer sheet.

But being under contract is only step one. They’ve seen Haskins on the practice field for a year, but never in the setting of being in competition for a starting job. Even Haskins knew last year there was no chance anybody but Roethlisberger was going to start in 2021.

“None of us know at this point”, Colbert said about the prospects of somebody like Haskins coming in this season and winning the job. “I think it’ll be a great training camp for those two and for whichever player we’re able to add to the mix”.

One can make the argument that there is a meaningful difference when you’re just competing for a spot on the roster and when you’re competing to be the starting quarterback. Could Haskins come in this year with the fire lit under him and prove to be the best candidate?

The Steelers are leaving the door open for that, though as we sit here today, they are prepared to move forward with Mason Rudolph while exploring all other alternatives.