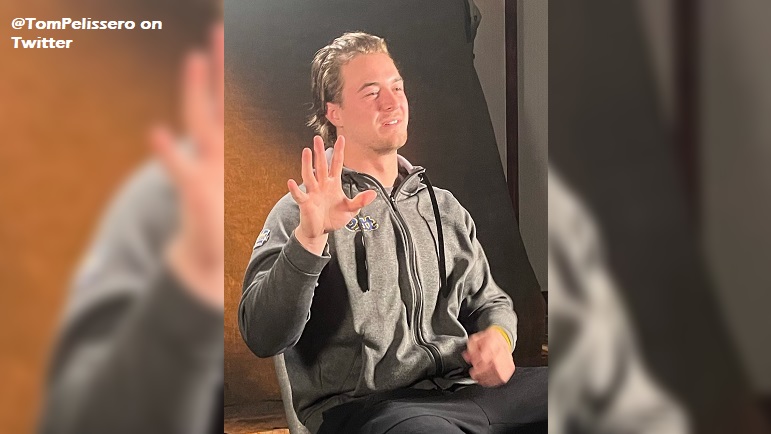 The 2022 Senior Bowl is now underway in Mobile, AL, and Steelers Depot has four people from the site on hand to cover the annual college event. With the 2022 Senior Bowl week now underway, there will be a lot of focus on Pittsburgh quarterback Kenny Pickett these next few days, especially when it comes to his arm strength and velocity. Pickett’s hand size will also be a huge focus this week, and as expected, he was asked to comment on that very topic during a Tuesday morning press conference after not allowing his hands to be measured on Monday.

“I think it’s the number one thing you hear about quarterbacks in the draft process you hear every year is hand size,” Pickett said Tuesday morning. “You know, the good news is I played in Pittsburgh and everyone in Pittsburgh knows it’s not the nicest place to play in October, November. So, I have experience playing in tough weather.”

Pickett, who reportedly has a double-jointed thumb, said on Tuesday that his main goal this week in Mobile is working on his mobility drills. He also said that hand stretching exercises are in his offseason future in order to help his hand size measurement be as accurate as possible when he arrives in Indianapolis, IN for the annual NFL Combine.

Pitt QB Kenny Pickett didn’t have his hands measured here in Mobile, but he has a good reason: He’s double jointed, so his thumb naturally points an odd direction, and he’s doing extra exercises to get an accurate measurement at the combine in March. pic.twitter.com/KLMdraG9AC

“I didn’t measure in this week. I just want to give the most accurate measurement I can,” Pickett said on Tuesday. “I’m working on mobility things. So, I’m sure I was waiting for that question. So, anyone else that has it, I can answer it now. Just want to work mobility things. I’ll measure it in Indy at the combine and that’ll be it.”

Pickett, who wears two gloves when he plays, has indeed played in a lot of bad and cold weather throughout his college career at Pittsburgh. One of those games came at Heinz Field in November and against North Carolina, which included quarterback Sam Howell playing for the opposition. Like Pickett, Howell is at this year’s Senior Bowl, and the two have shared notes about their recent meeting in Pittsburgh.

“Played in Pittsburgh, tough weather,” Pickett said. “That game was tough as well. Probably the heaviest rain game that I’ve played in. Me and Sam talked about it, actually. One of the first things we talked about was that game when we got down here together. … It was pretty bad the whole way, but definitely as the game went, it got worse.”

In that bad weather game against North Carolina, which Pittsburgh won in overtime, Pickett completed 25 of his 43 total pass attempts for 346 yards with three touchdowns and one interception. That said, Pickett did fumble quite a bit throughout his college career so that one game won’t be enough to quiet the concerns about his hand size throughout the pre-draft process.

Pickett figures to have a great showing in Mobile, AL this week and in the process solidify himself as being one of the top three quarterbacks in this year’s draft class. Pickett keeping his hand size a mystery this week is probably as pretty good decision on his part as there will be no true number to focus on, only how he throws.

We will have serval reports on Pickett’s practice performances this week on the site, so be on the lookout for those.