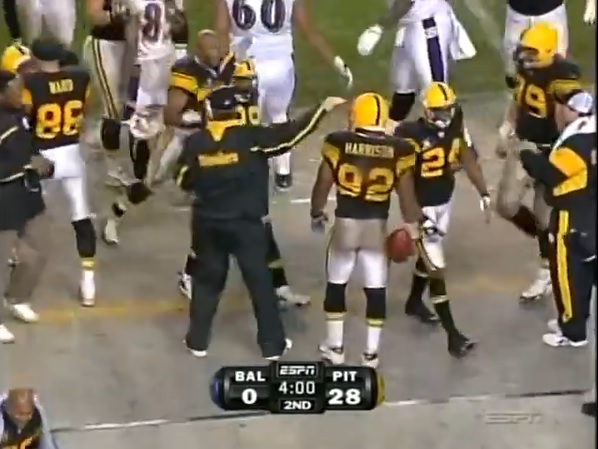 I know I’m not old enough to watch the Steel Curtain live and witness Joe Greene, L.C. Greenwood, Jack Lambert, Mel Blount, and all the others dominant in the 1970s. But the greatest defensive performance I’ve ever watched in a single game is easily what James Harrison did to the Baltimore Ravens on a Monday night in 2007.

It was the Pittsburgh Steeler’s 75th anniversary game, inviting back legends who sported the black and gold. On that night, Harrison played like a one-man Steel Curtain with one of the most insane stat lines you’ll ever see in a box score: 10 tackles, six QB hits, 3.5 sacks, three forced fumbles, one interception, and one fumble recovery.

Numbers don’t even do it justice. Harrison owned the Baltimore Ravens, even when matched up against Hall of Famer Jonathan Ogden.

Harrison was part of a Steelers’ Defensive Player of the Year roundtable shown on the team’s YouTube channel, a fantastic interview that included him, Rod Woodson, Joe Greene, and Troy Polamalu, all Steelers who have won the award.

Woodson, who served as a moderator, asked Harrison when he realized he could hang in the NFL. Harrison said it was that game.

“It was 2007 when I first got my start,” Harrison told the table. “We were playing against Baltimore. It was like I could do no wrong. And I felt like I wasn’t even trying. It was crazy. I’ve never had that feeling since then.”

Pittsburgh easily disposed of the Ravens, running up a 35-7 halftime lead and cruising to a 38-7 victory. The Ravens were held to just 104 total yards of offense, five first downs, with quarterbacks Steve McNair and Kyle Boller sacked a combined six times. Offensively, Ben Roethlisberger tossed five first half touchdowns on just thirteen completions.

Harrison said he was in the zone so much he wasn’t always following his assignment and still making plays.

One time, I wasn’t even supposed to be rushing. I just took off and said I’m going to get to the quarterback. Sack. I’m there. [Linebacker Larry Foote] was like, ‘bruh, that was my sack.’ I’m like, ‘nah, that was mine.’ Something was like, just go. I was supposed to drop into curl/flat.”

Those 3.5 sacks were the most he would ever record in a game and was a marquee performance that put him on the NFL map. At the time, Harrison was still playing on special teams, forcing a fumble against Ed Reed on a punt return that was recovered by Lawrence Timmons. It was one of the most textbook tackles you’ll ever see.

Here’s a couple clips I put together last year of his all-time performance.

The roundtable was a fantastic discussion that bridged the Steelers’ eras from the 70s to 90s to 2000s/2010s. Be sure to listen to the whole conversation, which I’ll again link here.