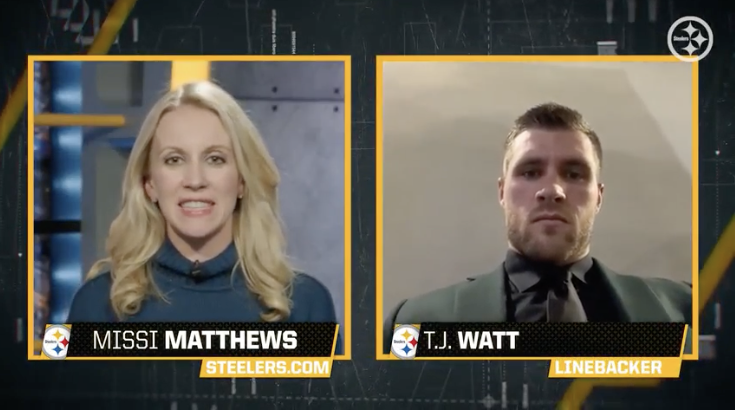 Hours after winning the NFL’s Defensive Player of the Year award for the 2021 season, the weight of the award and standing within the Pittsburgh Steelers’ organization all-time still hasn’t quite hit outside linebacker TJ Watt.

Watt, who tied the NFL’s single-season sacks record in 2021 with 22.5 while playing in just 15 of 17 games and missing time in two others, won the DPOY in a landslide, garnering 40 of the 48 votes one year after using the DPOY snub as motivation.

That motivation paid off in a big way as Watt dominated from start to finish after becoming the highest-paid defensive player in football in the summer of 2021, locking himself into a long-term deal with the Steelers.

After winning the award Thursday night during the NFL’s Awards Show on ABC, accepting the award from his brother, JJ — a three-time winner of the award himself — Watt spoke one-on-one with Steelers.com’s Missi Matthews and explained just what the award means to him.

“Yeah, it’s been very surreal. I think, like I said…I’ve been to this award tour I think four or five times now,” Watt said to Matthews, via Steelers.com. “Once was when I was up for rookie of the year. I obviously didn’t receive that award. The other couple times for JJ to get his defensive player of the year awards and to be able to be here and have my own trophy and to be able to walk off the stage was very, very surreal.

“And, like I said, it’s, it’s truly not possible without so many people, obviously those close to me in my personal life, but also the people in the building there in Pittsburgh.”

Congrats to my guy T.J. Watt. You are proof that preparation and hard work pay off. Defensive Player of the Year looks good on you.

Speaking of in the building in Pittsburgh, Watt joins a long, illustrious list of Defensive Player of the Year award winners in the Steel City, including the likes of Mean Joe Greene (twice), Mel Blount, Jack Lambert, Rod Woodson, James Harrison, and Troy Polamalu. Of the seven previous DPOY winners, all but Harrison is in the Pro Football Hall of Fame, though he may have his bust enshrined in Canton in the years ahead.

Steelers to win Defensive Player of the Year:

Watt is already on a Hall of Fame trajectory with 72 sacks, 22 forced fumbles, four interceptions, 32 passes defensed, 80 tackles for loss, and 150 quarterback hits in just five seasons in the NFL.

“That’s surreal. I guess I don’t think it’s really hit me yet,” Watt said to Matthews regarding being in the same company as other Steelers greats. “There’s so many special football players that have walked through that building and to be able to be added to that list of legendary Steelers is very special. I’m sure once we have time to sit down and kind of reflect and take a minute and look at this trophy…it’ll hit me a little bit more.”