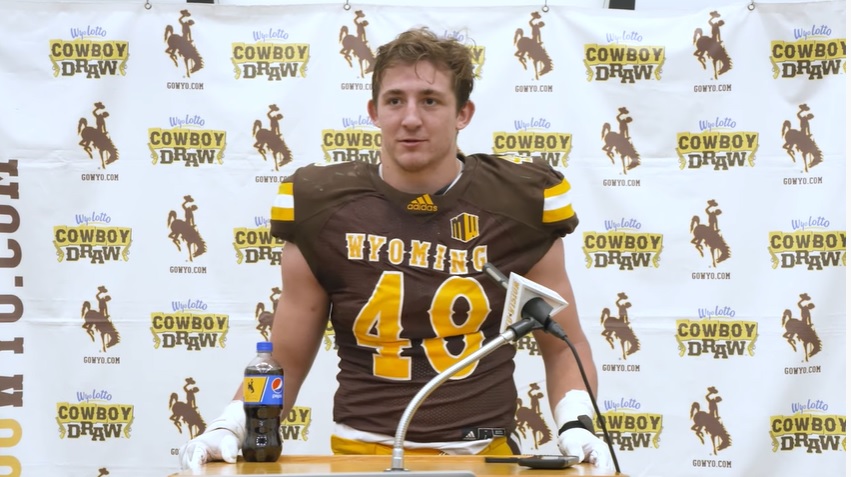 After the National Team practice concluded, I had the opportunity to speak with Wyoming LB Chad Muma who was one of the players chosen to take the podium. I asked him if he had been in contact with anyone from the Steelers and his general thoughts of Pittsburgh in general. He responded:

“I can’t say that I’ve talked to anyone from the Steelers specifically yet. I am a fan of Pittsburgh though due to their culture of being a great franchise and their style of hard-nosed football. It’s something I try to emulate with my game and my work ethic, so I think I would be a fit with what they try to do.”

While Muma may not have yet spoken to Pittsburgh, he did a great job selling himself as a potential fit for the organization. Given the unknown situation at linebacker heading into 2022 with Devin Bush likely not having his fifth-year option picked up and the possibility of Joe Schobert getting cut as a cap casualty if he does agree to a pay cut, off-ball linebacker could be high on the Steelers’ priorities given the need to improve the run defense and the lack of stellar play from last year’s unit.

Wyoming LB Chad Muma (@chad_muma) with a fantastic rep chasing down the RB on this toss. Great range, slips past a blocker on the way, helps make the tackle at the boundary. pic.twitter.com/8uukkBM2ND

I then proceeded to ask Muma about his relationship with former college teammate and current Bengals LB Logan Wilson and how he has helped Muma through this process. His response was as follows:

“Definitely. I talk to Logan quite often. I texted him after he won the AFC Championship game and made it to the Super Bowl. I texted him last night prior to starting practice today. He’s a great leader and teammate as someone I looked up to in college and tried to learn as much as I could from while he was there. He truly helped make me the player I am today. He’s been so helpful giving me advice and guiding me through this process that he just went through not too long ago. He truly is a good friend.”

Muma seemed to really open up when asked about Wilson who he undoubtedly holds in high regard. He was extremely genuine in his response, taking the time to thank Wilson for his development as a football player as well as helping him make that transition from college to the pros. Muma has been a player gaining a lot of steam in the draft community throughout the college season, with several saying that he could be a better player in the pros than Wilson has become in Cincinnati. Alex Kozora actually completed Muma’s draft profile prior to coming down to Mobile which you can look at below.

Whether or not that occurs will have to be seen, but Muma appears to be the next Wyoming LB to try and make the jump from the Mountain West to becoming a starter in the NFL. He finds himself in a talented, deep linebacker class that has a ton of value in the middle rounds, but his production in college along with his high character and skill set as a player make him an intriguing prospect that should interview well with teams at the NFL Combine as well as on pre-draft visits. His testing and performance the rest of the week in Mobile will be key factors in where his draft stock ends up come April.

What are your thoughts on Chad Muma? Do you think that he compares favorably to his former teammate Logan Wilson as a player? Would Muma be a good fit in Pittsburgh? Please leave your thoughts below and thanks again for reading!