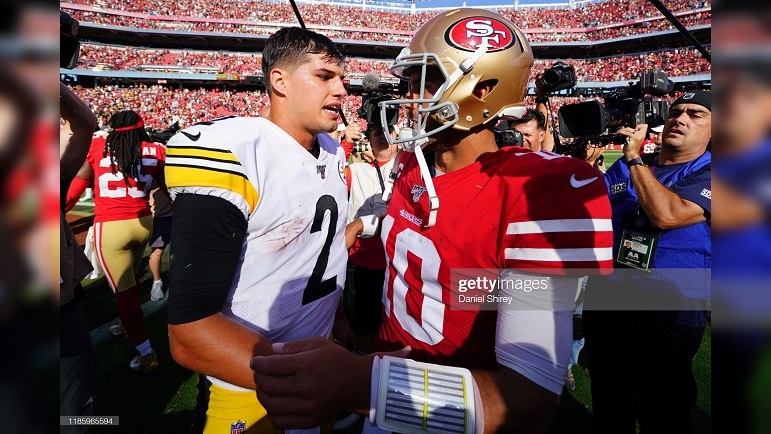 Settling down to watch the Super Bowl each year is often a treat, but for many Pittsburgh Steelers fans this year, it comes with some pain as the AFC North rival Cincinnati Bengals represent the AFC in Super Bowl LVI at SoFi Stadium in Los Angeles against the Los Angeles Rams.

Just a few short years ago the Bengals were one of the laughingstocks of the NFL, but after landing Joe Burrow No. 1 overall in the 2020 NFL Draft, adding dynamic wide receiver Ja’Marr Chase at No. 5 overall in 2021, and spending some money in free agency on the defensive side of the football, the Bengals look like an absolute powerhouse moving forward.

Knowing that, the Steelers — along with the 14 other AFC teams that are on the outside looking in — have some work to do to get back to the big game. According to NFL.com’s Gregg Rosenthal, the thing the Steelers must do is shoot for the stars at quarterback, specifically one higher than Mason Rudolph.

“The Steelers are one of those teams that should happily enter the bridge-quarterback market,” Rosenthal writes. “Whether it’s Jameis Winston, Teddy Bridgewater, Jimmy Garoppolo or Kirk Cousins, there are a lot of upgrades available from 2021 Ben Roethlisberger or 2022 Mason Rudolph.”

🚀 2nd most among all QBs pic.twitter.com/jrVf9o80Ls

I don’t mean to harp on Rosenthal there because his point is valid, but did he have to go with the clear, obvious statement regarding the Steelers getting back to the Super Bowl? Of course they’re not getting there with Mason Rudolph at the helm. Nobody in their right minds believes that could be the case, especially after seeing what we’ve seen from him throughout his NFL career.

Though Rosenthal gives out some names that could help the Steelers get back to Super Bowl prominence, none of those names really moves the needle as far as the Steelers and contending goes. Winston is a fine piece, one that could make the offense more explosive, but he’s still too turnover prone and hasn’t shown he can lead a team to the playoffs. Same for Bridgewater.

According to Matt Lombardo, whoever the hell that is, the San Francisco 49ers want a 2nd round pick, or a 3rd + player in exchange for QB Jimmy Garoppolo.
#Steelers #NFL

Garoppolo has played in a Super Bowl and has found himself in the NFC Championship Game twice in the last three years, but he needs a great supporting cast around him, and we’ve seen he can’t make the big throw when its needed most to help his team win the game. As for Cousins, he’ll at least keep the Steelers relevant late into the season, but getting back to a Super Bowl? Forget about that.

The way the Steelers have to aim higher than Rudolph is through the draft, whether that’s in 2022, 2023 or beyond.

Great QBs don’t find their way onto the free agent market, and the Steelers are nowhere close to a QB away, at least ahead of the 2022 NFL season. There’s no doubt they need to find the next guy at the position quickly to remain relevant in the AFC, let alone the AFC North, but none of the guys Rosenthal listed do that.

The aim will be high at the position, but will the shot at the next franchise signal caller be a hit?