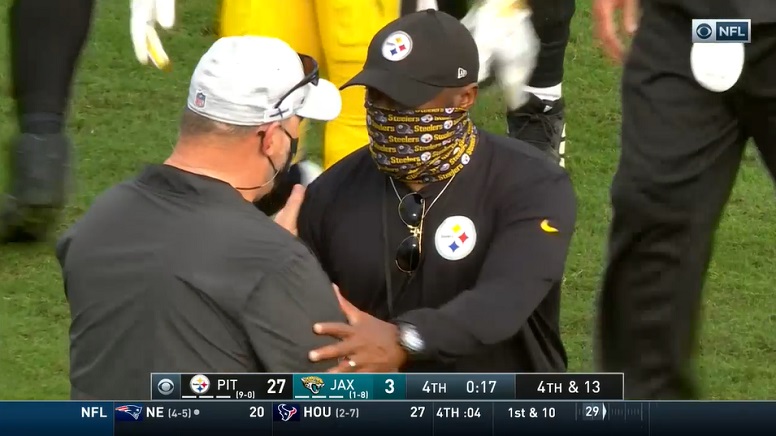 Another thing we know: Longtime NFL offensive line coach Doug Marrone, who spent last season coaching Alabama’s offensive line, is reported to have parted with the team because he is expected to be returning to the NFL, according to multiple sources, including ESPN.

While we know of no formal prior interest, we talked last season about how Marrone should be on Pittsburgh’s radar for the job when they let Shaun Sarrett go, ultimately deciding to promote Adrian Klemm (which didn’t exactly go off like gangbusters).

Marrone and the Steelers have a lengthy history as adversaries. He beat them as the head coach of the Jacksonville Jaguars in the postseason in 2017, for example. He even once spent a training camp with the Steelers back in 1990, though he never made the team, spending two years in the World League of American Football with the London Monarchs and winning the World Bowl in 1991 before entering the coaching profession.

He was quite successful as an offensive line coach over the course of his career, something we documented in the article linked to above, but he has also had multiple stints as head coach. The ESPN report mentioned listed no teams that may have been interested in him, nor for what job.

I would imagine that we would know if he were heading to some team to be their head coach at this point, however, and there are only four openings left. We know the Steelers have an opening at offensive line coach, and we can probably surmise that they already planned to move on from Chris Morgan, so it is very possible that they are working on hiring Marrone, or already have a deal in place.

After all, the Crimson Tide has already hired another offensive line coach in anticipation of him leaving. He is going to be in the NFL. It’s just a matter of a team and a title being announced. And the Steelers could do worse to  be the once to announce him as their next offensive line coach, even if everyone might be clamoring for Munchak, who indeed is also a possibility so far as we know.