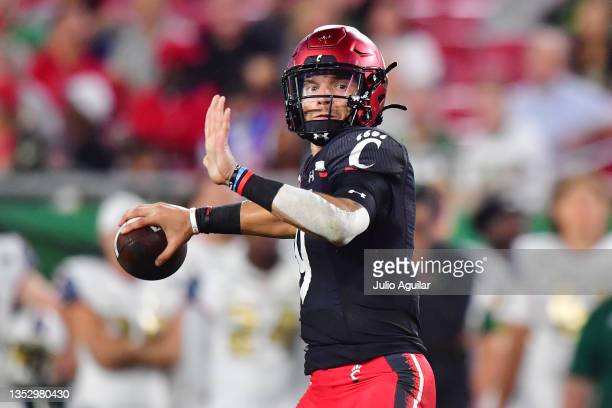 The 2022 quarterback class is one of the most divisive in recent memory. With the Senior Bowl having five of the likely top six quarterbacks in the class, this week is a big one for these signal-callers to try to prove they’re the top guy. Cincinnati’s Desmond Ridder is a guy trying to do just that. A four-year starter for the Bearcats, Ridder was a major reason for the team’s rise from a run-of-mill AAC team to being the first non-power 5 program to break into the College Football Playoff. His 44 wins under center are third-most in the history of college football.

While he has proven he knows how to win, not everyone is sold on him being able to bring that ability to the next level. He’s a tall, wiry 6’3″ 207 pounds with the ability to run, and has a strong arm. Not many will question his arm strength, especially when he had the longest throw by air distance of 62.5 yards at the National team’s practice.

Desmond Ridder has thrown the furthest pass by air distance, 62.5 yards on a deep route down the sideline to Bo Melton. The pass was also the highest initial spin rate recorded on a pass in the National practice today – 673.9 RPM. @ZebraTechnology #TheDraftStartsInMOBILE™️ pic.twitter.com/RDcIVQo2vX

Where the questions start about him, when talking about transitioning to the NFL, is how he can control that arm strength and throw accurately on a consistent basis. It’s something Ridder knows he has to show the scouts down in Mobile if he wants to become the first QB drafted in this year’s draft.

“Yeah, the number one thing one is accuracy. Obviously, it’s tough out here in the rain but you know still putting good balls in the frame of the receivers, tight end, running back’s body. You know, being able to help. Then also just stacking days on top of days come out yesterday, you know have an alright day, average day. Come out here [today] the weather’s not great. They’re just looking to see how you respond to it. How you play in bad conditions. And I think as a group of quarterbacks, we had an alright day, you know, weather permitted,” he said.

When asked about the mechanical tweaks he’s made to improve his accuracy, Ridder alluded to his lower body mechanics which have looked particularly impressive this week in Mobile.

“Lengthening the stride just a little bit. My base was a little tight so I was overstriding a lot, which kind of tilted the body, dropped the elbow,” he said. “So really just working on that, keeping a good base and a good stride length.”

Ridder credited his trainer’s Jordan Palmer, a former NFL quarterback himself and brother of former Cincinnati Bengal Carson Palmer, for helping him get to where he is now with his footwork.  Palmer is known as the “go-to” quarterback coach for up-and-coming NFL draft picks. Some of his recent trainees include Deshaun Watson, Josh Allen, Joe Burrow, and Trevor Lawrence.

When watching his film at Cincinnati one thing that noticeably sticks about Ridder compared to most of his other QB counterparts in this draft class was his ability to run a West Coast scheme, making presnap reads, checks, and line adjustments himself presnap. It’s something that he thinks will help ease the transition into an NFL offense.

“Our offense was more of a spread offense. Early on in my career, it was a run-heavy offense using the run game to set up the pass game. And then, later on, it got more spread out, like I said, where it might have been a pure progression or it could have been man/zone read, so you know, it was kind of all over the place,” he said. “There are a lot of similar concepts. We have a lot out here that I had back in college and you know, it’s made it easy for the transition. I had great coaches that helped me along the way to obviously learn and master offensive at Cincinnati, and it’s just made it easy for me.”

We’ll see if his tools combined with his experience in an offense with NFL concepts will help propel him to being a top draft pick come April.