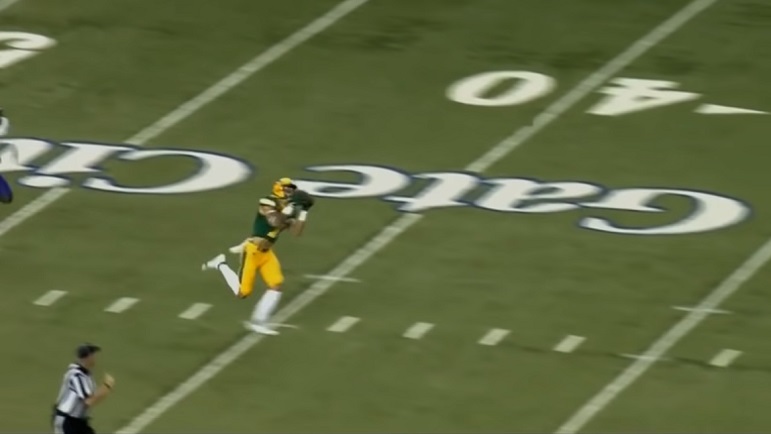 As expected, North Dakota State wide receiver Christian Watson produced lot of buzz at the 2022 Senior Bowl, and even our own Tyler Wise tweeted last week that the Pittsburgh Steelers met with the draft prospect while in Mobile, AL. With so much buzz about Watson exiting the Senior Bowl week, I figured I would take a deep dive into a large selection of his targets from this past season and contextualize them for all to see.

I contextualized all of Watson’s 2021 targets from the 11 games he participated in, and the results are below. In those 11 games that Watson played in last season, he was targeted 58 times in total, and he caught 43 of those passes for 800 yards and seven touchdowns.

Watson’s average intended target distance on these 58 contextualized targets was an impressive 13.6 yards, and his average completed air yard distance on his 43 total receptions was an equally impressive 10.6 yards. He averaged a healthy 8.0 yards gained after catch on his 43 receptions, as well. Watson had just two drops on these 58 targets that I contextualized. 12 of his 43 (27.9%) receptions resulted in explosive plays of 20 yards or greater.

Watson possesses some deceptive speed and shows good balance and run after the catch ability. He measured in at the Senior Bowl at an impressive 6040, 211 pounds with 10-inch hands and 32 3/4-inch arms. He plays physical and lined up on both sides of the formation and at multiple spots last season. It looks like he played a lot of the X receiver spot at North Dakota State, however. That said, Watson might just be best suited to many play the Z receiver spot at the NFL level. He’s certainly not as shifty or twitchy off the line as the Steelers’ current X receiver, Diontae Johnson.

I didn’t find Watson’s route tree in these 11 total contextualized games to be all that diverse. He did, however, catch quite a few balls in all areas of the field and eight of his completions were more than 20 yards down the field. Quite honestly, Watson compares similarly to Steelers wide receiver Chae Claypool when he came out of Notre Dame a few years ago. Watson, however, seems to do a better job of stacking defenders down the field than Claypool did. Watson also seems to do a better job of staying on his feet on catches down the field than Claypool did when he was in college.

While not contextualized as part of this study on Watson, North Dakota State used the wide receiver in numerous and creative ways. He even lined up some in the backfield. In total, Watson registered 15 carries for 144 yards and a touchdown in 2021. Watson also returned 10 kickoffs for 227 yards in 2021.

It will now be interesting to see how well Watson performs at the annual scouting combine a little more than a month from now. He certainly looks like a top 20 wide receiver in this year’s draft class and figures to be drafted in either the second or third round. It’s not a bit surprising that the Steelers showed interest in Watson at the Senior Bowl, and I’m sure nearly all 32 teams did so.

You can see each target that Watson had in 2021 by clicking on the video link for each play that is included in the table below.