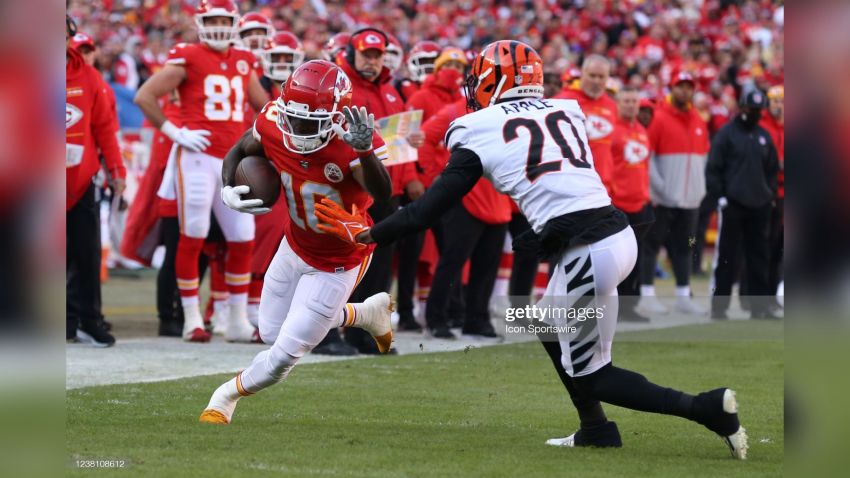 Eli Apple is a somewhat rare example of a former first-round draft bust who nevertheless was able to salvage his career and still develop into an overall solid contributor, even if he never came close to living up to the pedigree that got him selected so early. A draft pick of the New York Giants in 2016, he is on his fourth team since then, with 2021 being his first with the Cincinnati Bengals.

And he just so happens to be in the Super Bowl, having been a full-time starter very nearly all season—but only because Trae Waynes has basically been injured for two years. Still, the bottom line is he has logged over 1,000 snaps on the season, with two interceptions, 10 passes defensed, and a couple of key plays along the way.

He was particularly impressed with himself after a goal-line stop just before the half last week against the Kansas City Chiefs, tackling Tyreek Hill in space on 2nd-and-goal from the one as time expired. That prevented the Chiefs from going up 28-10 at the time, and that was enough for the Bengals to mount a second-half comeback.

Yet he won’t shut up about it. He tweeted about it right after the game, talking about how Hill is “a baby”, quote-tweeting a replay of the tackle that he made on Hill at the goal-line. Hill only responded to say that he wasn’t going to engage in a “Twitter beef” and that he could call him if he has something to say. Fellow Chiefs wide receiver Mecole Hardman responded in the same fashion.

Then, of course, he tweeted at both Chiefs wide receivers, saying to direct message him their numbers. “I’ll hook yall up wit them super bowl tickets on me”, he responded.

I suppose the trash-talking rights go to the victors. I also suppose this moment was a long time coming for Apple, the Ohio St. alum who had his mother drop him off at his first practice back when he was a rookie.

He’s certainly been through his ups and downs over the course of his career, and I respect the journey he’s taken to get here, even if he has only had this latest opportunity because the Bengals have been without one of their biggest free agent signings in their entire history for basically the past two years.

While he might be talking smack to the skilled receivers his team just beat, however, he still has to face Cooper Kupp, Odell Beckham Jr., Van Jefferson, and Tyler Higbee, so I’d probably wait to pipe up until at least after the game to see how that goes down. Mind you, Apple and Beckham were teammates in New York for two and a half seasons.