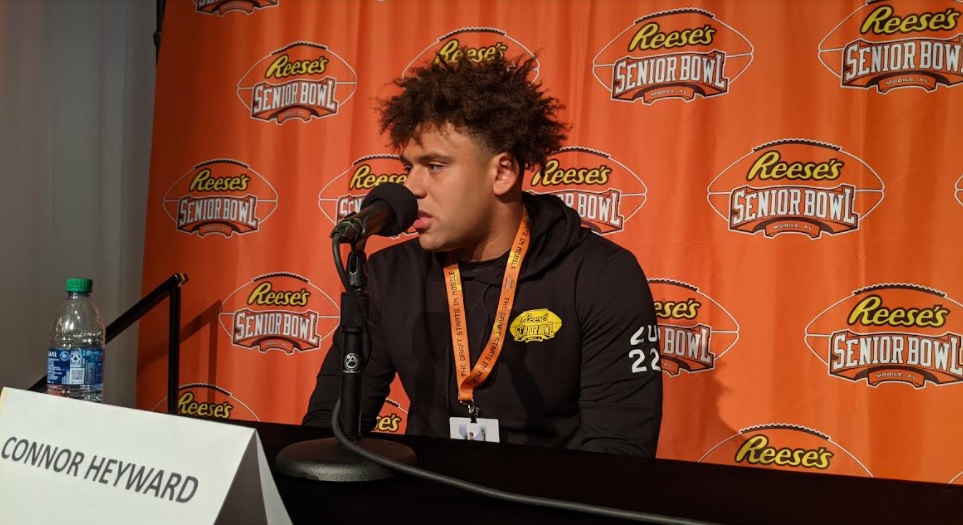 T.J. and Derek Watt. Terrell and Trey Edmunds. By the summer, there could be another brother-duo in Pittsburgh: Connor and Cam Heyward. Their paths are likely to be different. Their positions certainly are, Cam an All-Pro defensive tackle while Connor is viewed as a H-Back, a fullback/tight end hybrid needing to cut his teeth on special teams. The younger Heyward spoke with reporters Wednesday at the 2022 Senior Bowl, happy with a good – though not perfect – day one of practice Tuesday.

“I’m being used in multiple ways,” he told Steelers Depot and other reporters in a podium session. “The playbook, learning every day and taking it day-by-day. I think one-on-ones went well. I won both my reps pass pro and then won my route, ran an option route. I think I could’ve done better in some of the team period. It was the first day. We haven’t played football in a while so everybody’s messing up, everybody’s anxious and ready to go. I think today’s gonna be a lot smoother.”

Heyward looked good in those drills with the anchor to absorb linebacker bull rushes and the ability to make contested catches, bursting to the outside against a linebacker he wrestled a pass away from.

Heyward was mostly used as a fullback in 2021 personnel for the Detroit Lion-coached American team. At Michigan State, he moved all over from running back to fullback to in-line tight end. His position in the league is likely to be just as wide-open, needing to create value with his versatility as opposed to a singular role. It’s the life most fullbacks lead but Heyward adds true offensive value, running the ball and even returning kicks early in his Michigan State career, comparing himself to 49ers’ stud fullback Kyle Juszczyk.

Michigan State moved him from running back to tight end prior to the 2021 season. But Heyward says it was a change a year into the making.

“I found out [about the switch] two weeks before the season. We talked about it for about a year and I was waiting on it because I knew what it was gonna take for me to get to the next level. But they wanted to do it the right way.  They didn’t want to rub any of the tight ends the wrong way. They knew I knew the playbook pretty well and it came second nature to me. So when we made that change all I had to work on was to do my technique. Things that I’m still working on. Because you can always get better at technique.”

Heyward confirmed he met with the Steelers two days ago and will meet with them again tomorrow. Pittsburgh has Derek Watt, cut from a similar cloth as fullback, occasional tight end, and solid special-teamer. But the Steelers value versatility and third-phase value as much as any team, potentially opening a path to join his big brother.

The relationship between Connor and Cam Heyward is one part familiar, one part unique. Sure, Connor fit the classic, tag-along little brother mold. But Cam served as an important figure growing up after their father Craig died when Connor was just seven years old.

“I was just the annoying little brother. But no, he was more like a father figure to me. He’s a wonderful big brother. I look up to him a lot.”

While Cam didn’t play in the Senior Bowl due to an elbow injury, he still offered Connor advice on this week’s event and how to handle the often-chaotic pre-draft process.

“Just soak it all up. Enjoy the process. Days are gonna be tough, but try to get better at something that you might have messed up.”

Connor isn’t nearly as big as Cam, weighing in at 5110, 239 pounds. But they share identical mentalities. Team-first, hard-working, do whatever it takes to succeed and help their team win.

“I just want to be on the field at the end of the day and that’s always been my mentality. It doesn’t matter if I’m getting the ball or not. I just want to impact the game somehow.”

With how through the draft process is, the Steelers – along with the rest of the NFL – will know Heyward well by the time draft day rolls around. But if they need a recommendation, they won’t have to look far. Just talk to #97.