Today I wanted to provide some college data in response to some great reader responses, considering it’s the offseason and I don’t always get the opportunity during the Steelers regular season. The interest was to compare the 2022 quarterback draft prospects to some recent college quarterbacks, so I decided to include first round selections since the 2016 season and 2021 Steelers that could return in 2022 while I was at it. 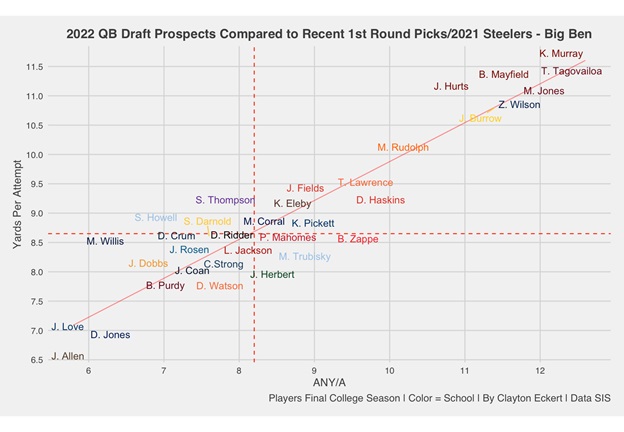 Interestingly, Steelers quarterback Mason Rudolph lands next on the graph, the final player with above ten results in both ANY/A and yards per attempt and ranking eighth in both data points.

Let’s look at the next tier of quarterbacks with a plus nine ANY/A result, which includes Trevor Lawrence, Dwayne Haskins, and 2022 prospect Bailey Zappe. Haskins is a restricted free agent for the Steelers and has the ninth ranked ANY/A just behind Rudolph along with a slightly lower yards per attempt result. I didn’t have an expectation on how the two would fare with the data going in, and it will definitely be interesting to see how either will perform next season if given the opportunity to start.

Here is where the data starts to get clumped towards the middle. I found it enjoyable to look at names that landed close together like Justin Fields and Kaleb Eleby, and Kenny Pickett just above Patrick Mahomes for example, while not making any hard conclusions. It is also fun to see where 2022 draft prospects fall in general, for example Sam Howell and Malik Willis on the left. The very bottom left was also surprising, with Josh Allen having the lowest result in the data points.

Next let’s factor in attempts and completed air yard %: 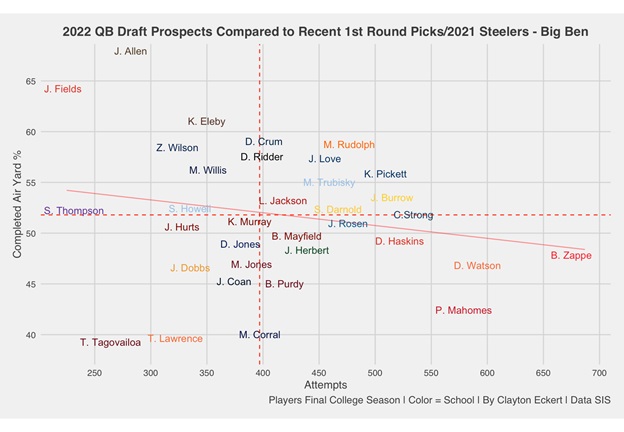 This is where Allen shined in college, and we’ve seen him carry this over to the NFL. Likewise, Justin Fields lands second on the graph and had the top ranked completed air yards rank in the NFL last season per Next Gen Stats. Eleby is the third ranked quarterback and the only other quarterback with a completed air yard % above 60! The more I continue to learn, the more he intrigues me as a prospect in this 2022 class and wonder if he could also carry this value successfully in the NFL.

Rudolph ranks fourth and had the most attempts of the players mentioned thus far. The optimistic side of me wonders if the Steelers can gain some momentum in this regard compared to the results and style of the offense designed for the recently retired Ben Roethlisberger, especially if the offensive line is upgraded as is sorely needed.

For the 2022 prospects, I found it interesting that eight of the 12 players I’ve looked at landed at or above the mean in completed air yard % considering there are 34 total quarterbacks on the graphs! Some other fun names near each other include Burrow and Carson Strong, Hurts and Sam Howell, along with the bottom results in completed air yard % including Matt Corral, Lawrence, and Tagovailoa.

To wrap up I wanted to provide accuracy data, with Catchable and On Target % from Sports Info Solutions: 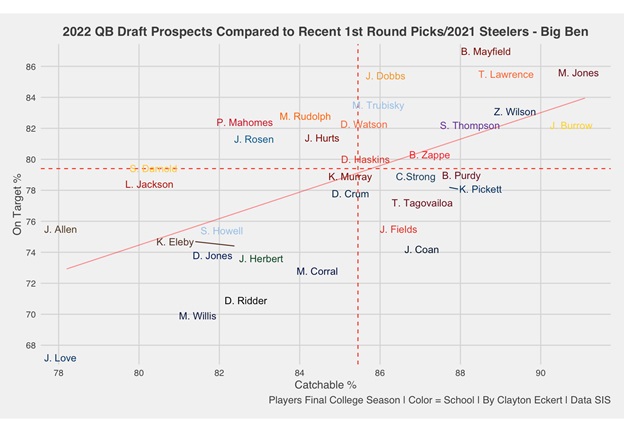 Mac Jones, Mayfield, and Lawrence top the graph with plus 85 results in both data points along with Burrow a plus 90 catchable % result! Wilson also fares well with the data, landing just above the top ranked 2022 prospect Skylar Thompson. Zappe is the only other 2022 prospect that landed above the mean in both data points! Joshua Dobbs impressively lands fourth in on target %, and it will be interesting to see if he is back with the Steelers this coming season!

Also found the higher mean lines telling, putting an emphasis on the well below average accuracy data of Howell, Eleby, Corral, Desmond Ridder, and Willis in this 2022 class. In most cases this had a correlation to air yards, with Corral as the exception.

What are your thoughts on the historical college quarterback data? Thanks for reading and let me know your thoughts in the comments!