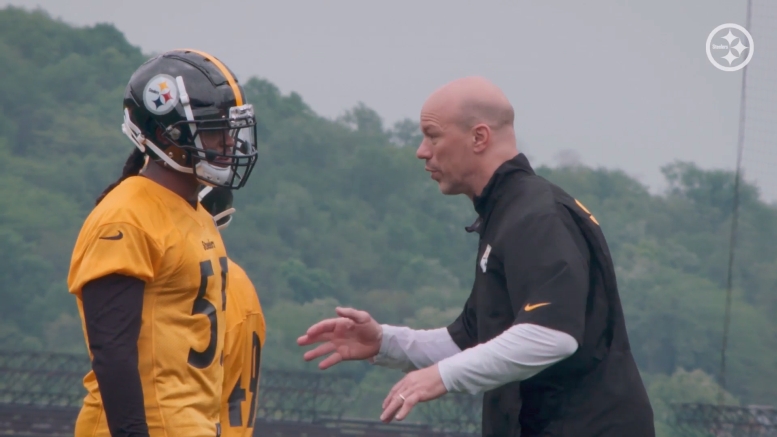 Question: What is Jerry Olsavsky’s status, and will his role change in the wake of Brian Flores’ hiring?

Jerry Olsavsky played inside linebacker for the Steelers for a decade. He has now been on their coaching staff for more than a decade, and is entering his eighth year with the title of inside linebackers coach, now one of the longest-tenured members of the staff.

Olsavsky suffered the death of his wife in October of last year and spent some time away from the team during that time, for obvious reasons. It is unclear whether or not he ever returned to the team in-season; at least it was never formally addressed by the team, but he may have been spotted on the sidelines.

After Pittsburgh divided up the linebacker coaching duties in 2015 following Keith Butler’s promotion to defensive coordinator, they never replaced Joey Porter as outside linebackers coach when his contract was not renewed in 2019. Since then, Butler and defensive line back Karl Dunbar—as well as defensive assistant Denzel Martin—had been working with the group.

At the same time, they did have Teryl Austin as Senior Defensive Assistant/Secondary while also employing a defensive backs coach, most recently with Grady Brown. Still, given what happened last year and the recent hiring of Flores and retirement of Butler, it’s fair to at least ask the question.

We had no idea that the team wasn’t renewing Ike Hilliard’s contract as wide receivers coach until they hired his replacement, after all. And we don’t know what Olsavsky’s contract status is. But given that he’s still listed as inside linebackers coach on the team site, there is no reason to think he won’t be retaining the same role he’s held since 2015.