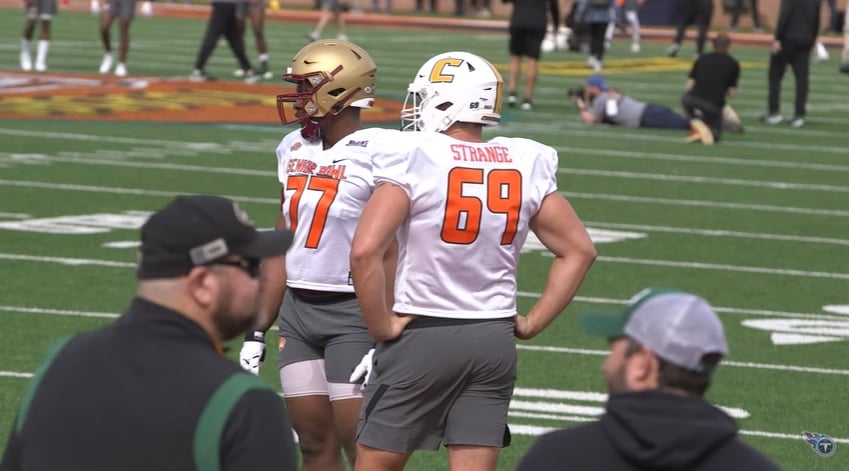 From now until the 2022 NFL Draft takes place, we hope to scout and create profiles for as many prospects as possible, examining their strengths, weaknesses, and what they can bring to an NFL franchise. These players could be potential top 10 picks, all the way down to Day 3 selections and priority undrafted free agents. Today I am profiling an offensive lineman that likes to stretch the meaning of “the echo of the whistle.”

If you’re a fan of your offensive linemen having a nasty edge to them then Cole Strange is going to interest you. He plays through the whistle and I get the feeling he doesn’t think the block is done until the defender is looking up at the sky. A lineman with a long and lean build with good length and a lot of starting experience at the FCS level. He played primarily at left guard with some snaps at center and the tackle spots as well. At the Senior Bowl, they took a look at him at center.

As a run blocker, the first thing you notice is his quickness. He gets out of his stance and on the move quickly. When engaging the defender he uses good pad level and solid hand placement and has good hand and core strength to sustain the block. He has good lateral quickness and good short area speed and is good on reach and scoop blocks with good hand placement and quick hips. On backside cut blocks he displayed good timing and effectiveness. He has solid timing on combo blocks and locates the second level defender quickly. The athletic ability is there to pull and lead outside.

He’s a very good finisher staying with his man and trying to put him on the ground. There is no standing around watching always looking to hit someone. Chattanooga was a Zone running offense so the only Power blocks were in the Senior Bowl and he was solid on down and double team blocks.

At Kentucky, Strange (69) is at left guard on a Zone run to the left will square up the defensive tackle using hand and core strength to sustain and keep the lane open for a good run.

At Wofford, this is an excellent reach block getting outside the 0 tech and walling him to the inside.

Vs Mercer, he is lined up as the right tackle on an unbalanced line and drives the defensive linemen inside providing a running lane behind him.

As a pass blocker, he has good quickness, pad level and hand placement with good lateral agility to slide with the rusher. He is most effective with jump sets engaging the defender quickly and they also used him to pull and protect the outside. Against power rushers, he has good core strength and is able to anchor well. He has good awareness using his drag had to one side while looking for trouble on the other side. His mental processing is solid recognizing blitzes and very good picking up the most dangerous defender. When uncovered he looks to help teammates with good physicality.

At Kentucky, at left guard he uses good pad level, core strength and very good hands inside the chest of the pass rusher to anchor and cut off the pass rush.

At the Senior Bowl, playing center he shows off his awareness. He uses his drag hand to feel to his left while looking right. He sees the defender to his right gain the advantage and he peels back to protect the quarterback.

Here are a couple of positive reps from the Senior Bowl practices. Good hand placement and pad level are evident.

On the second level, he will lean and lunge against quicker defenders and would benefit from breaking down quicker and showing more patience to mirror them. On space blocks and screens he can get overzealous and miss smaller players. He was better moving forward rather than backward in his pass sets. He handled power rushers better than speed rushers on vertical sets with the quicker pass rushes getting around his edges when he overreaches toward them. Defenders who win the pad level battle are going to be able to move him with strength.

Vs Furman, he loses the pad level battle and the defender drives him back to the quarterback.

Here are a couple reps from Senior Bowl practice that did not go well. First an overset to his right and then strength got the better of him. He battled and bounced back every time learning from his mistakes.

Overall, Strange is long and lean with good athleticism and a nasty streak. He is an effective Zone blocker with good agility and technique on reach and scoop blocks. He has the mobility to pull and get outside on screens. As a pass blocker he is most effective on quick sets using good agility, hand placement, pad level and a strong anchor. He could benefit from added patience on second level and space blocks. Improvement in his vertical set along with working on handling speed/quicker pass rushers is needed.

The Senior Bowl looking him almost exclusively at center is interesting. It could be they know what he is as a guard and wanted to see his versatility. They may also prefer him at center. From his practice reps he was 50/50 in the win loss category but he seemed to learn in improve on every other rep.

Regardless, his best fit is in a Zone running scheme to benefit his quickness and agility. I would have liked to see more in a Power scheme but he has the demeanor to fit in that offense. For Pittsburgh, I don’t think they would want to bring in another positional covert to play the pivot. He would likely need a year of learning at the NFL level before getting a chance to start at guard or center and adding ten pounds of strength would be a huge benefit. A player who compares perfectly based on size is a familiar one, Maurkice Pouncey. He measured very closely with Strange having a bit more length. Alex Cappa may be a better comparison on playing style coming into the NFL.

Games Watched: 2020 – At Kentucky, Vs Furman, At Wofford, At Mercer, Senior Bowl