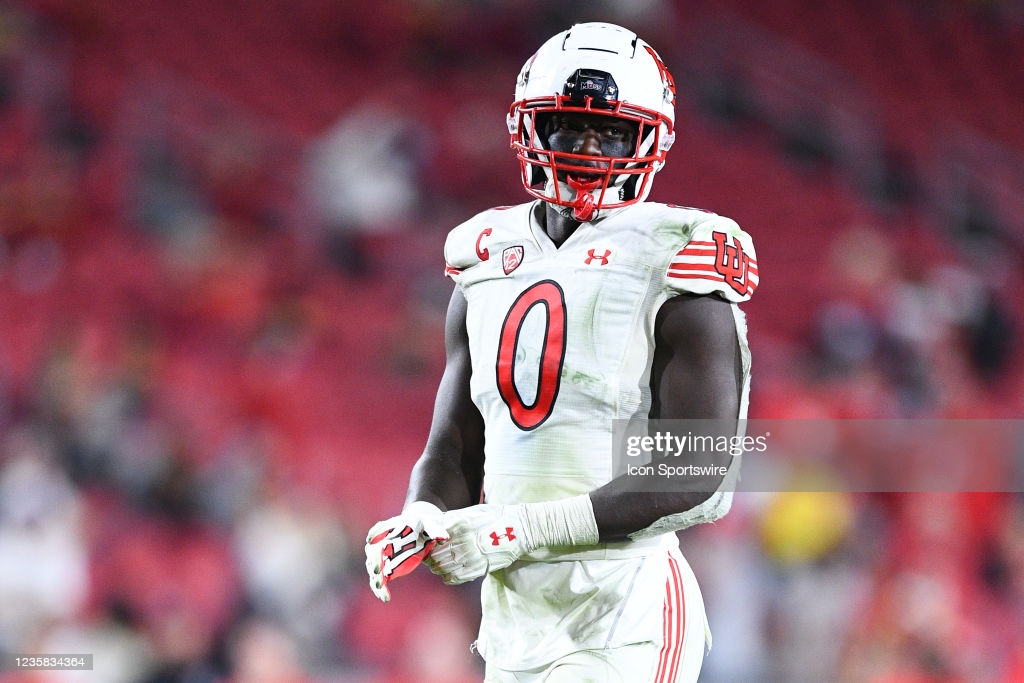 Today I wanted to start a series, with the goal to continue learning about the upcoming draft’s prospects. After providing data on the quarterbacks, I wanted to jump over to the defensive side of the ball and look at the linebackers, a position Pittsburgh could be looking to upgrade for the 2022 season. The graph below uses their 2021 PFF Grade and their current rank on PFF’s Big Board that updates through the draft process: 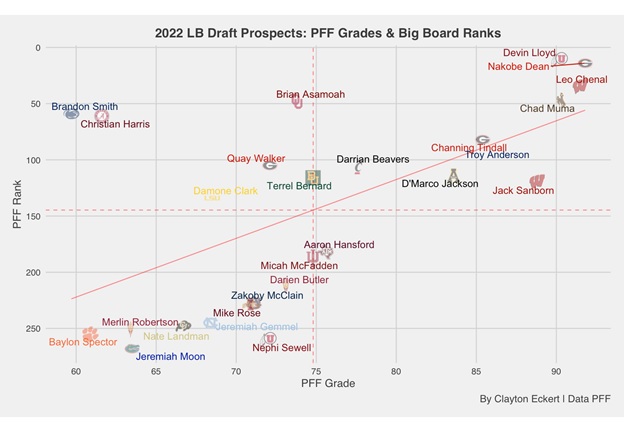 Utah linebacker Devin Lloyd has the fourth ranked PFF grade and tops the big board ranks for the position at 11th. He had plus 80 grades in pass rush, run defense, and coverage to go with his plus 90 defensive grade showing a versatile skillset last season. Linebacker Nakobe Dean tops the PFF grades of this group and is currently the second ranked prospect on their board and within the top 15 players, with above 90 coverage and pass rush grades along with a plus 80 grade in run defense for the excellent Georgia defense.

Wisconsin linebacker Leo Chenal had the second ranked PFF grade and is currently ranked just outside of the first round on their big board. He provides good size along with plus 90 pass rush and run defense grades, but a below 60 grade in coverage. Wyoming linebacker Chad Muma had the third ranked PFF grade and inside the top 50 players on their board, with a plus 90 overall and run defense grade but below 80 in coverage. He had a good Senior Bowl performance for the National Team with several positive plays, especially in the run game along with a nice screen pass tackle and a crossfield tackle on a quarterback scramble. PFF currently projects Oklahoma linebacker Brian Asamoah as the last linebacker in their top 50, improving his play in his final season with plus 70 overall, run defense, and coverage grades along with good athleticism.

Shifting back to the top right of the graph we see Channing Tindall, another Georgia linebacker who has great speed paired with his plus 80 overall, pass rush, and coverage grades and a lower but above 70 run defense grade. He appeared in the Senior Bowl for the American Team and enjoyed his performance, displaying good tackling on defense and special teams along with a pass break up in coverage.  Montana State linebacker Troy Anderson had a slightly better overall PFF grade than Tindall, with a strong coverage grade and run defense grade above 80. Anderson played for the National Team in the Senior Bowl, diagnosing and making tackles in his strong showing.

The next players landed higher in the top 100 on PFF’s Big Board with lower overall grades than Tindall and Anderson. Penn State linebacker Brandon Smith had a below 60 overall grade, with a respectable 80 coverage grade, but a below 50 run defense grade. Alabama linebacker Christian Harris is the last player in PFF’s top 100, with a plus 60 overall, pass rush, and run defense grade but just above 50 for his coverage grade.

Getting outside the top 100 we can start to see the depth of the position, which Pittsburgh should be thankful for with so many needs for the 2022 roster. Looking at grades over ranks we see another Wisconsin linebacker, Jack Sanborn with a near 90 grade along with plus 80 pass rush and run defense grades but above 60 coverage grade. He played for the West Team in the Shrine Bowl with a good showing overall with a fumble recovery, strong hitting and tackling, but missing quarterback E.J. Perry on a scramble for a two-point conversion.

Appalachian State linebacker D’Marco Jackson had an above 80 overall and run defense grade, while also having above 70 pass rush and coverage grades. He played in the Senior Bowl for the American Team and especially enjoyed his play in the run game, noting three run tackles in a row. Cincinnati linebacker Darrian Beavers had a below 80 overall and run defense grade, below 70 in coverage, but a strong pass rush grade to go along with ideal size. He played for the National Team in the Senior Bowl and personally thought he was quiet in the game but did have a nice play in coverage.

Now for the last three players in PFF’s current top 150. Baylor linebacker Terrel Bernard had a plus 70 overall grade with near 80 pass rush and run defense grades, but just above 60 coverage grade. Quay Walker is the third Georgia linebacker at the position and had a plus 70 overall, run defense, and coverage grades and just below 70 in coverage to go along with PFF’s current projection just outside the top 100. He was invited to the Senior Bowl but withdrew. LSU linebacker Damone Clark had below 70 grades across the board but has good size and physical traits paired with good play at the Senior Bowl for the American Team, where he had a sack along with good pass rush in general along with displaying a strong bull rush.

The remaining players are currently PFF’s later round/undrafted possibilities, and I will comment on a few. Texas A&M linebacker Aaron Hansford tops the grades with plus 70’s across the board and ranks of this group. Indiana linebacker Micah McFadden also had a plus 70 overall grade, with an impressive plus 90 pass rush grade but lower plus 60 grades in run defense and coverage grades. Arizona State linebacker Darien Butler had plus 70 overall and pass rush grades along with a near 90 grade in coverage but below 60 run defense grade along with being undersized.

A couple of players lower on the graph I had all-star game notes on were Utah linebacker Nephi Sewell and Clemson linebacker Baylon Spector. Sewell had a plus 70 overall, run defense, and coverage grade and noted a good tackle in his start for the West team in the Shrine Bowl. Spector also played in the Shrine Bowl, but had a less than desirable performance in my opinion with no standout plays and allowing one of Perry’s two point conversions as one of a few negative plays.

One thing seems certain, the Steelers will have options in the draft to pick from with seemingly good depth and talent. I personally hope they take advantage and if they draft one, the guys that could potentially be there on day two/early day three could be a value pick for the 2022 defense, especially if they move on from linebacker Joe Schobert.

While the ranks on PFF’s board with certainly change, I especially hope you enjoyed the grade data and some notes from the all-star games. Later in the process as the Steelers Depot draft team continues to compile more draft profiles, I plan and look forward to providing visuals with their Depot draft grade and projection.