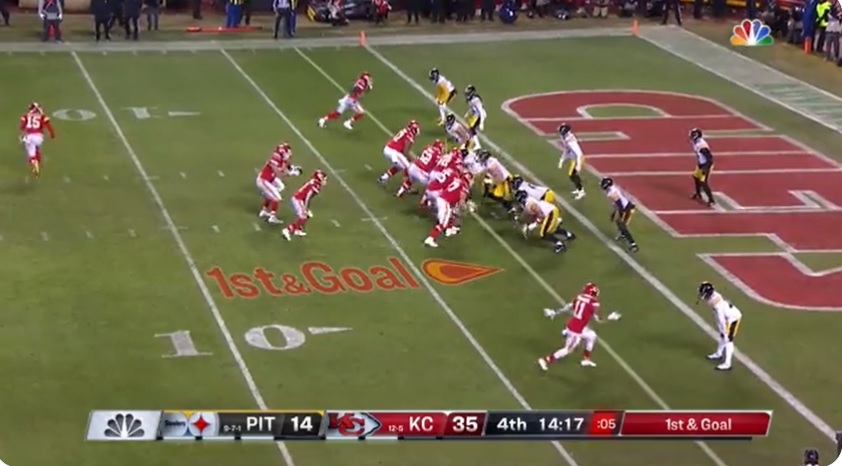 The Pittsburgh Steelers’ defense was playing great. Until it wasn’t. That’s what happens when you play the Kansas City Chiefs. It’s all going according to plan. Until it isn’t. After shutting the Chiefs out in the first quarter, the Steelers allowed 21 points in the second quarter, putting them in the hole at halftime.

After the game, TJ Watt said that kind of momentum is hard to stop.

“Anytime a team gets up by multiple touchdowns it’s tough as a defense,” he told reporters post-game via the Steelers’ YouTube channel. “Because their full playbook is open. They can run, they can pass. It becomes more difficult and that’s why you don’t want to get in that situation. Just couldn’t get it done.”

Watt’s scoop-and-score touchdown put the Steelers up 7-0. But the Chiefs responded with six straight touchdown drives, including three in the second half.

Following Pittsburgh’s lead, Mahomes led the Chiefs on a robust, eight-play, 76 yard drive, capped off by Patrick Mahomes’ underhand shovel pass to RB Jerick McKinnon. They did similar their next drive, seven plays, 74 yards, Mahomes hitting WR Bryon Pringle on a double-move to beat Joe Haden and give the Chiefs a lead they wouldn’t give back. The third touchdown of the quarter was a dagger, a 48 yard touchdown on 3rd and 20 to move their lead to 14, 21-7, heading into the break.

From there, the game was essentially over. The Steelers battled in the first quarter, winning on third down and creating multiple turnovers, but it’s a sixty minute game. Pittsburgh’s defense showed up for the first 20 while the offense, in typical fashion, didn’t show up until the waning minutes of the fourth quarter with the outcome long decided.

After an early interception, Mahomes played like Mahomes and yet again schooled the Steelers. His numbers in three starts look like what some quarterbacks do in a whole year.

Patrick Mahomes in three career games against the Steelers.

Critically, Kansas City finished their drives, going a perfect 4-4 in the red zone, toying with the Steelers’ defense near the goal line with touchdown passes to linemen and touchdown throws by tight ends. To Watt, those moments were the costliest.

“Just weren’t able to get off the field. I think that was the thing that we were doing really well, what we had planned and we were executing. They’ve a lot of weapons, they have a lot of great things they do schematically as well. Just couldn’t hold on there as the game wore on.”

Keeping the score down early was one ingredient to a winning gameplan. But defense alone couldn’t win this game. Beating the Chiefs means matching big plays with big plays, something this offense isn’t equipped to do.

And so the defense had to win this game. And they were. Until they weren’t. Now the season is over.