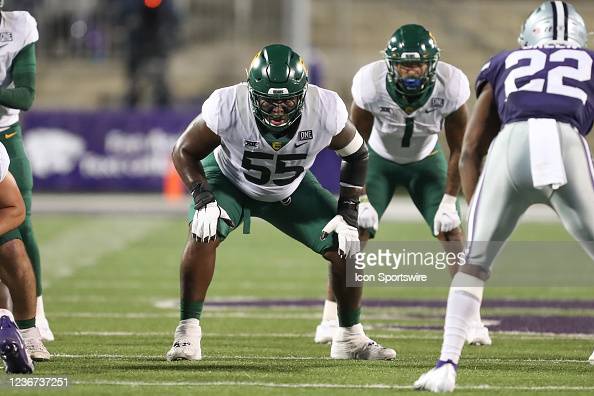 One thing is certain ahead of the 2022 NFL Draft and the start of the 2022 regular season for the Pittsburgh Steelers: The offensive line will need to be rebuilt in a hurry.

The Kansas City Chiefs have certainly laid out the blueprint for how to do that in one single offseason, but that’s likely a blueprint the Steelers won’t follow due to the financial commitment and draft picks used via trade to get the big guns in Joe Thuney and Orlando Brown Jr., not to mention the draft picks used on Creed Humphrey and Trey Smith.

The Steelers have a ton of holes on the roster ahead of the 2022 season, so it would be difficult to rebuild the offensive line in a hurry like the Chiefs. However, the Steelers could try to find some patches, at the very least, in guys like Baylor’s Xavier Newman-Johnson and North Dakota State’s Cordell Volson, both of whom are in Las Vegas for the East-West Shrine Bowl and bring not only a ton of starting experience, but serious versatility in the trenches.

Newman-Johnson, who played in 47 career games at Baylor (33 starts) over five seasons, might be a bit on the undersized side of things heading into the NFL (6016/303, 32 5/8″ arms, 79 1/2″ wingspan) but he brings not only experience but real versatility to the table, having starting games at left guard, center and right guard during his time in Waco.

Not only did Newman-Johnson play three different positions throughout his four seasons at Baylor, he also had to learn four different playbooks for all three positions, forcing him to take on a heavy load on and off the field. Despite that challenge, Newman-Johnson was a key cog in the offensive line all four seasons in Waco, capping off a terrific senior year helping the Bears go 12-2 and win the Sugar Bowl.

Though versatility is nice, it can often leave a guy yearning for a set home. That’s not the case with Newman-Johnson.

“You know, usually I look at it as a good thing, really being able to play all three,” Newman-Johnson said to Steelers Depot Friday inside The Velvet Room at the Luxor Hotel & Casino during East-West Shrine Bowl week. “So when it comes to learning plays, I learn all three: left, center and right. I’ve learned all three. So if that chance or that opportunity comes where coach goes, ‘oh, I need you to go in at center’ or ‘I need you to flip sides’ it’s easy for me. Because I’ve already put that time in and learn those positions and practice those reps and practice at each position. So, that’s really how I look at it.”

That versatility, experience in the Big 12 and ability to play in a physical, wide-zone offense should help Newman-Johnson become an intriguing name as the draft process rolls along.

Newman-Johnson isn’t the only one in Las Vegas with versatility up front. North Dakota State’s Cordell Volson might challenge Newman-Johnson for the most versatile title holder this week.

The Bison standout certainly has the measurables (6060/319, 33 3/4″ arms, 81 1/2″ wingspan) to hold up at left tackle, but the fact that he also has extensive experience at both guard positions should make him an intriguing Late Day 2 prospect, especially coming from the same program that produced not only Tennessee’s Dillon Radunz and Green Bay’s Billy Turner along the offensive line, but his older brother, Tanner, who was a 2018 UDFA with the Los Angeles Chargers.

It would be nice for the Steelers to find a couple of true building blocks up front in the trenches in the 2022 NFL Draft, but it never hurts to find quality, experienced depth coming up from the collegiate level, especially those that can play multiple positions. Those types are often just as valuable to a 53-man roster as true starters.