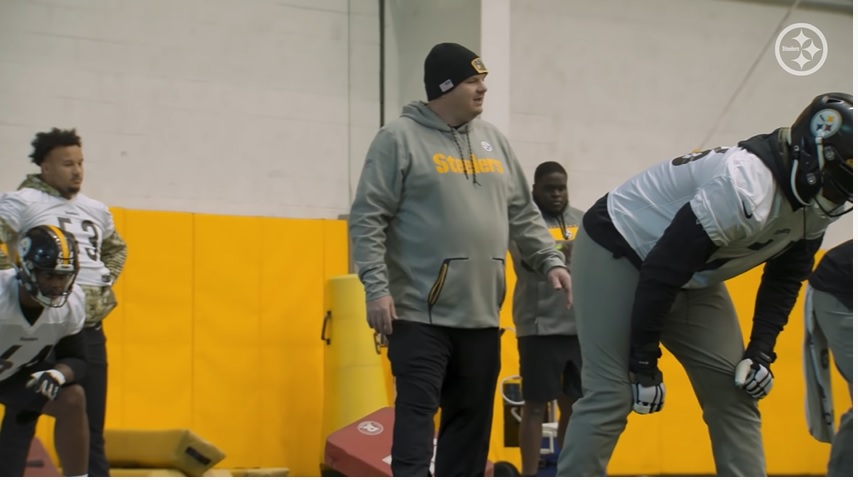 Taking over the offensive line room with two regular season games to go, there wasn’t a lot new head OL Coach Chris Morgan was going to be able to change. No reinventing the wheel, especially when you’re one of the guys spinning it, Morgan serving as the assistant and moving into the lead role when Adrian Klemm left for Oregon.

But center/guard J.C. Hassenauer said Morgan made one change to the team’s weekly preparation, bringing in non-offensive linemen into the meeting room.

“One thing we did do, we incorporated a lot more outside guys into the meetings,” he told reporters Wednesday via Steelers.com. “We had some tight end meetings. We had the running backs in there as well. So, I think that kind of helped everyone kind of get a bigger grasp and better understanding of the full run game that week.”

That grasp turned into production. Pittsburgh had easily its best rushing day not only of the year but of the last four, its 190 yards the most its run for in a game since 2017. Najee Harris carried the bulk of that load, totaling a career-high 188 yards. Pittsburgh ran the ball well start to finish, unlike in other games when defensive indifference allowed the offense to find traction on the ground, like the second half of the Vikings and Chiefs games.

Like run defense, rushing offenses are a full-team effort. The O-line does the heavy lifting, but everyone else gets involved: Tight ends, wide receivers, fullbacks. And having the running backs being part of the room gets everyone on the same page. A better understanding of how blocking schemes unfold and what the back is reading as he carries the ball.

With results like what Pittsburgh got Monday night, Hassenauer said he expects Morgan to do the same throughout the week.

“I think here on out, we’re gonna continue doing that as well.”

Though Morgan’s adjustment felt like an obvious one that should bring criticism Klemm’s way, Hassenauer said both men are good coaches.

The Steelers’ run game will face a tough test this weekend against the Baltimore Ravens. Baltimore enters the game as one of the league’s best run defenses. In Week 12, Harris averaged under 3.4 yards per carry. If Pittsburgh can run well in this game, they’ll not only likely end the regular season with a winning streak, Morgan will probably keep his job as the head offensive line coach.