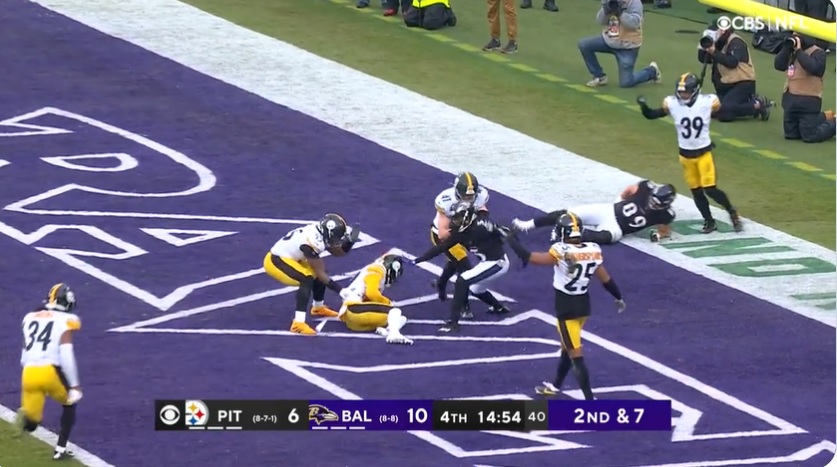 1. Of Course Overtime – Why would I expect anything less? The Steelers have a way of raising your heart rate in just about every game. Late game comebacks, we’ve seen those. Late game prevent defense! That always gets the blood pressure pumping. So why not overtime. Ravens/Steelers have produced three overtime games since 2015. In the last nine games, seven have been one score games. So it seems fitting that in the city where Ben Roethlisberger made his NFL debut, his last regular season game would be a one score game in overtime.

2. Now? No. Now? No. Now? Yes – It took a while for T.J. Watt but congratulations to him on tying the single season sack record. I first mentioned the possibility of him challenging that record here in week four but it took a while today. First it was a potential sack fumble that was changed to an aborted play. Then Cameron Heyward was called for unnecessary roughness giving the quarterback whiplash. Watt had had enough of that and did it on the next play. Missing two full games and parts of other makes this really an impressive feat.

3. 10/10 Guy – I hope then learn how to clone a human in the next couple years because I can’t imagine this defense without Cam Heyward. You need a sack? He can get you one. Does the pass defense need some help? He can knock down a pass. How about a big stop on a third down to get the ball back? Say no more. He finished with ten sacks and ten pass break ups (a career high) this year. He makes the big play when you need it. He is irreplaceable.

4. Maybe Try The Other Side – It’s basically become a weekly thing to complain about something Matt Canada does but his play selection is baffling. A team might run a play several times if it was successful. That is common but when it, you probably shouldn’t run it multiple times. They ran a running play in the second quarter where Ray-Ray McCloud went in motion in one direction and then reversed back the other way. The first time they ran it to the right it was a one yard gain. On the same drive he flipped the formation and ran it to the left. One yard gain. And for good measure he ran it on third and one in the third quarter and got stuffed. If I can see it coming the professionals can. What are you doing?

5. The Gent and The Freier – Is it just me or has the tight end group gotten more interesting? Remember Zach Gentry came into the NFL as a raw, pass-catching tight end. He learned how to block. He was a ghost in this offense until recently and he now has nine receptions in the last three games. Defenses rarely cover him so he must be, I repeat, must be utilized more in the passing game. Pat Freiermuth is about as reliable as they come. He made big play after big play to make tough catches and move the chains. These two can make plays.

6. DB Contributions – Look across the entire defensive backfield and you’ll find a guy that made a play. Minkah Fitzpatrick had a HUGE play knocking the ball out of the hands of Marquise Brown in the fourth quarter. Cam Sutton had a red zone interception. Arthur Maulet had a tackle for a loss. Ahkello Witherspoon broke up a pass late in the game. Terrell Edmunds had an interception and two other pass break ups. In the biggest game of the year everyone stepped up.

7. The D That Keeps on Giving – The disappointing run defense continued their poor performances giving up 249 yards rushing. Some of the defensive linemen get pushed around to easily. The linebackers become Velcro once engaged with blockers and can’t become unstuck. The 249 was the second highest for the Ravens this year and the most they had since week nine. Latavius Murray ran for 150 yards. That is the second highest of his career. He had 351 yards and a 3.4 yard per carrier average coming in. He turns 32 in nine days. A nice gift to him.

8. For A Second There – The conspiracy theory started creeping into my head. Does the offensive line want a shot at the playoffs? Joe Haeg had a face mask penalty that killed a drive. Then John Leglue had a false start. Chukwuma Okorafor decided it was his turn and has his own false start penalty. What is going on here, fellas? We know this offense can’t survive s and we know on third and long they don’t try to get first downs. Then need to lock it up.

9. It’s A Snap – We here at the Steelers Depot gave you unprecedented coverage in the preseason that others do not. We talked quite a bit about the position battle at long snapper. Christian Kuntz won the job and has been really good particularly on field goals. These guys have it down to rotational science these days where they know how to hold the ball so when they snap it to the holder the laces are already out. I’ve watched closely probably far too much but the holder this year basically has only had to catch it and put it down. How do you earn a job in the NFL where you could play for 15 years and make a lot of money? Do something that separates you from others.

10. Playing Through Pain – After Najee Harris hyperextended his arm I figured he was done. You could see him trying to stretch it on the sideline and he was wincing. Somehow he ended up back in the game and you could still see he didn’t want to use the arm if it wasn’t necessary. Was it a wise decision? I don’t know. Does he make a difference? Absolutely. They probably don’t win this game without him. I hope there are no lingering effects for him if they play next week.