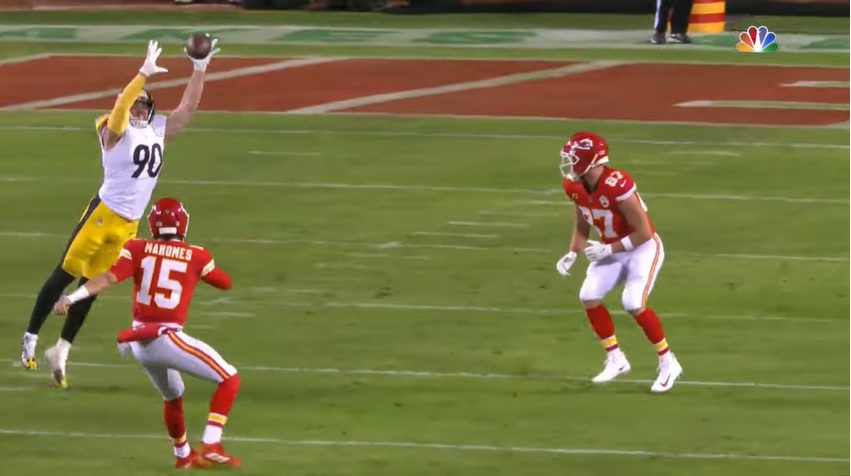 Following each game in the 2021 Steelers season I will be giving you my ten takes.  These aren’t going to be hot takes and meant to shock the world. This will be instant reactions to the game written while still in that period just following the game when the emotions are high and the ideas are fresh. Included will be thoughts, observations, queries and reasons that caused me to yell at the television.

1. Land of Confusion – After 17 games I expected a little bit of comfort and expected the offense to be on the same page but from the get go there was discombobulation. There were a couple hand offs early that it looked like someone went the wrong way and then it appeared wonky. There were throws that had receivers breaking in areas and the passes thrown elsewhere. I don’t think it was jitters. I think the execution was just plain poor. This offense struggled all season but this was a little different.

2. Hey, That Was Our Spark – The defense came through in a big way on a play where the Chiefs fumbled all on their own and then after picking it up Cam Heyward forced another fumble that T.J. Watt scooped and took for a score. Just the spark the Steelers needed, right? No! That play seemed to wake up the dormant dragon that was the Chiefs offense and they ran off twenty-one unanswered to end the first half and scored touchdowns on five straight possessions. Frankly, the Kansas City offense was too much to handle but we knew that coming in. The defense did all they could early and the offense did nothing. Stop me if you’ve heard this before.

3. What Is The Opposite of Agoraphobia? – The fear of going outside is an affliction that sadly some people endure. Diontae Johnson may have the opposite. He doesn’t like to go inside when running routes.  By the numbers we chart, adding the two in this game, seven of Diontae Johnsons ten drops are inside the numbers.  He loses concentration and takes his eyes off the ball to try to avoid defenders. He cuts of his momentum when he does catch it from a suspected fear of running into a big hit. It’s something he must overcome or the drops are going to continue. He can’t just run routes on the outside. That’ll give the defense an advantage.

4.No Speed Limit in KC – The entire Chiefs offense is loaded with speed and the discrepancy between the two teams was evident. The Steelers have one guy with a timed 40 under 4.45 and that’s Chase Claypool. The Chiefs had four under 4.46 on their offense. There are many needs and holes that this organization needs to fill but speed needs to be a priority. And not just any speed (see Dri Archer). They need productive speed.

5. I Shudder To Imagine – I don’t think there is a defensive lineman in the league that hustles more than Cam Heyward. He makes more plays downfield than any other man his size in the league. I can’t imagine what it’s like to be an offensive player, gaining yards downfield and then you see a 6’5” 295 pound freight train coming at you at full speed. That’s life flash before your eyes moment. Like losing the veteran quarterback this year his time soon will come to an end but I’m not going to tell him that.

6. Shots Were Fired – I was happy the Steelers took their deep shots down the sideline. Watching the defensive film of the Chiefs it showed they have given up big plays that way. The execution however was lacking. By my count they threw nine deep throws with five on first down and four on third down. Two were poorly underthrown. Two had the receiver stop their route.  One may have gone through the receivers hands and two well covered incompletions. Just two were caught and both by the same guy, James Washington.  They were going to need chunk plays to keep it close. They just didn’t connect enough.

7. A Little Bit For Everyone – We know this offense but I don’t think I’ve ever seen production, or a lack there of, like this in a game. The Steelers had nine players produce between 20 and 37 yards of offense.  Washington was the HIGH with 37 yards. That was the highest! Najee Harris, Benny Snell, Johnson, Zach Gentry, Juju Smith-Schuster, Claypool, Pat Freiermuth and Ray-Ray McCloud all landed in that range. You’d like to get production from everyone but usually at least one guy stands out.  Those nine players totaled 259 yards. For comparison, Travis Kelce and Jerick McKinnon combined for 250.

8. Welcome Back, 19 – Tell me it wasn’t good to JuJu back out there. I know there are some that don’t like them and that’s okay. But you have to give him credit for not only working his tail off to get healthy but also playing in this game. He could have sat it out and no one would have said a thing but he probably wanted one more game with his QB. It was kind of like he never left when you see he tied for the team lead in receptions was second in targets and three of his catches were for first downs. I hope he’s back next year.

9. A Bad Sign For the Defense – Okay, there were some good spots with the T.J Watt tipped pass, Devin Bush’s interception, Watt’s scoop and score and a couple of nice pass breakups by Tre Norwood. It’s never a good thing when four of the top five tacklers for the game are defensive backs. Terrell Edmunds, Minkah Fitzpatrick and Joe Haden each had six and Cameron Sutton had five. If you’re DB’s are making that many tackles you don’t need to see the scoreboard. That is far too many plays downfield.

10. The Final Chapter – Eighteen years is a long time to play this game. In the eighteen years before Ben Roethlisberger arrived the Steelers had six different players lead the team in passing. Finding a franchise quarterback is extremely hard. What Ben gave to the team and the fans over that time was consistency, toughness, productivity, a lot of wins and hours and hours of enjoyment not to mention three Super Bowls and two championships. He battled, always. You always felt like you had a chance with him in the game.

He is not going to be easy to replace. Whoever comes next will be compared to him unfairly so try to cut him some slack. I hope you all were able to enjoy watching your favorite team with a Hall of Fame quarterback. A lot of fans never get that chance. Honestly, it may be a long time before we see it again.