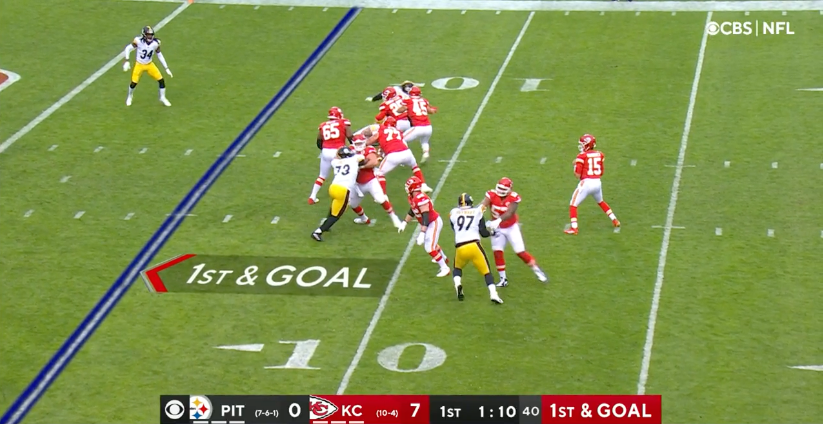 One day after Christmas, the Pittsburgh Steelers’ defense found itself between a rock and a hard place against the Kansas City Chiefs and star quarterback Patrick Mahomes on the road inside Arrowhead Stadium.

Send pressure Mahomes’ way? He’d get the football out quickly to his plethora of playmakers. Sit back in zone defense? Mahomes picked apart Pittsburgh’s soft zones. No matter what the Steelers tried to do defensively, it didn’t work, as Mahomes had all the time in the world to pick apart Pittsburgh’s defense, driving the Chiefs up and down the field to the tune of 30 points before taking a seat on the bench, allowing backup quarterback Chad Henne to put up two other field goal drives (one on a very short field) in a 36-10 loss.

Now, less than a month after that 26-point shellacking at the hands of the Chiefs, the Steelers and head coach Mike Tomlin now must figure out how to try and slow down the Chiefs’ high-powered attack. Asked Tuesday what that would mean in terms of rushing more or sitting back and playing zone coverage, Tomlin was quick to state that you can’t do too much of either defensively.

“The bottom line is you can’t do either too much. You better be prepared to do all of the above when you play good people,” Tomlin said to reporters Tuesday, according to video via Steelers.com. “You can’t beat ’em in a one-dimensional way. You can’t. And so it’s gonna take the full complement of what it is that we do. And then it’s gonna have to be done at a high level, from an execution standpoint.”

Having Joe Haden back playing at a relatively high level in the secondary, along with the use of Ahkello Witherspoon in dime and nickel should help Pittsburgh try and hold up on the back end against a tough Chiefs’ offense, especially with the Steelers being able to move Cameron Sutton around to try and disguise some coverages.

It will all start where it usually does for the Steelers’ defense though: Stopping the run and generating some pressure. In that Dec. 26 matchup, the Chiefs had far too much success on the ground with Clyde Edwards-Helaire, Derrick Gore and Daryl Williams, rushing to the tune of 127 yards and a touchdown. That balance kept the Steelers guessing throughout the game, which plays right into Andy Reid’s and Mahomes’ hands.

Then, when you add in not generating any pressure — Mahomes was sacked and hit twice on 30 drop backs — that’s typically all she wrote against the Chiefs.

Pittsburgh will have to find that balance between pressuring Mahomes and providing enough coverage on the back end to make things difficult for the former league MVP and yearly All-Pro QB. Doing so will go a long, long way towards keeping the Wild Card matchup competitive.