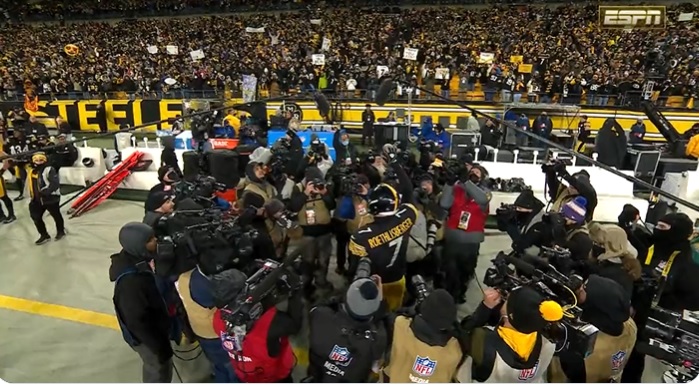 Monday night was special for a lot of reasons. For T.J. Watt, the atmosphere was one of those unique factors. Over 63,000 fans packed on a frigid January night watched Ben Roethlisberger’s final home game, a 26-14 win over the Cleveland Browns.

Speaking to reporters after the game, Watt said the crowd and the energy was unlike anything he’s experienced before.

“It was truly an atmosphere that I never felt here before,” Watt said via the Steelers’ YouTube channel. “It was really, really special. The fans made it so amazing for him. And I’m very appreciative they were able to do it for him.”

The crowd’s energy was incredible start to finish with “thank you Ben” chants throughout the game. But after the clock hit zeros and the Steelers officially won, the crowd made the moment even more memorable. Roethlisberger took a lap around the stadium, high-fiving fans before meeting with his family at the tunnel as the crowd sent him off in the best way possible.

Crowd noise had an impact on the game and helped the Steelers’ defense hold the Browns in check time and time again.

“Anytime we play at home, the fans go crazy. Get [the Browns] on a silent count. They wanted to throw the ball as much as they did. So we knew there was opportunity for splash. Just feeding off each other and feeding off the crowd.”

Pittsburgh sacked Baker Mayfield nine times, the most they’ve ever dropped Browns quarterbacks in a singular game. While the Steelers’ offense was far from its best, the defense made play after play. They even sent Ben Roethlisberger off with the game’s final snap thanks to Tre Norwood’s interception with ten seconds left.

Roethlisberger echoed Watt’s comments after the game. He was asked to put into words what Steelers Nation means to him.

“I don’t know that I can. This is home. I was born in Ohio but I live here and I’ll always be here….they’re the best fans in all of sports. I’ll stick to that until the day I die. To see all the signs in the jerseys and the towels, and to hear them cheer for me coming out of the tunnel, all that stuff. I don’t know that I’ll ever put it into words and that’s why I wanna soak it in. I wish I could bottle it and have it forever. But I will in [my heart] and in my mind.”

Roethlisberger finishes his regular season career undefeated against the Browns. The Steelers will hit the road for Week 18 against the Baltimore Ravens, needing a win and help – chiefly a Jaguars’ win over the Colts – to get into the playoffs and extend Roethlisberger’s career.

No matter what happens next weekend, what took place Monday night at Heinz Field will be remembered by all those who watched for the rest of time.