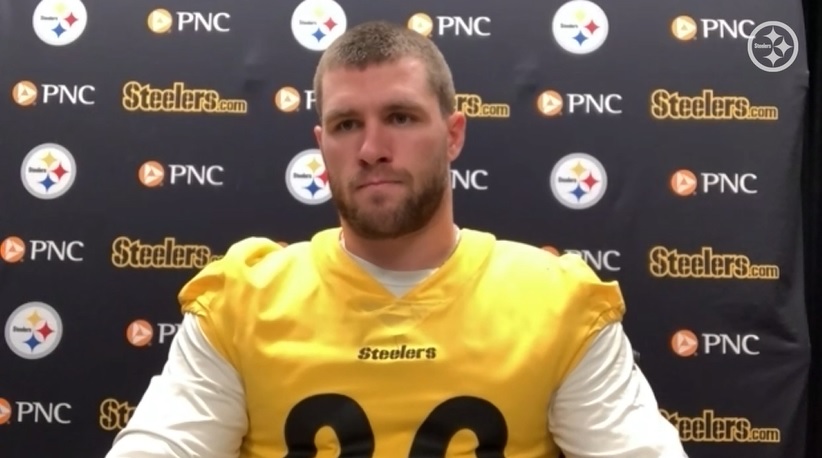 In a must-win game, it’s unclear who will be starting at inside linebacker for the Pittsburgh Steelers Monday night. Starters Joe Schobert and Devin Bush are currently on the Reserve/COVID list. While Bush was placed there last week, it seems like the earliest he could test out of protocol is Sunday morning, 36 hours before kickoff, meaning he’ll have gone two weeks without practice. There’s no guarantee he even clears COVID protocol at this point. Schobert was placed on the COVID list Friday and while in theory, he could test out tomorrow or Monday, the chances of that happening are low.

Despite that, speaking to reporters Saturday, T.J. Watt’s confidence in what’s left with the group hasn’t changed.

“We always feel comfortable with our depth here,” Watt told reporters via Steelers.com. “It’s one of those things, next man up mentality. Spillane and whoever else is beside him will step up. We just need to get off blocks and make life as easy as possible for those guys. So they’re not engaged with blockers six, seven, eight yards downfield trying to make plays.”

Of course, the fact Watt had to say “whoever else is beside him” speaks to the level of uncertainty there. Spillane will be one of the starters, just as he was for last week’s loss to the Kansas City Chiefs, a game in which the Steelers’ run defense was at least a bit better by recent standards. Who will get the helmet next to him is a bigger question. It will probably go to Marcus Allen, a core special teamer who has just 16 defensive snaps this season, all coming in dime packages. There’s also Ulysees Gilbert III, who has managed to stay healthy all year but saw his first defensive action in Week 16, also all coming in dime packages. Unless rookie Buddy Johnson has a quick turnaround with the health of his foot, those are the team’s options.

It’s a bleak outlook against a Cleveland Browns’ team with one of the league’s better run games and a group getting healthier, returning left tackle Jedrick Wills, allowing Joel Bitonio to move back to left guard. Center J.C. Tretter may also play this week, too, while RB Kareem Hunt is trending in the right direction for Monday night.

Of course, it’s not like Bush and Schobert were lighting up the world when they were playing. Bush has been a lightning rod for criticism in 2021, struggling in his return from a torn ACL. Schobert was thrown into the fire, a late-camp acquisition and while he has played slightly better than Bush, it hasn’t been by much. Pittsburgh has had a historically bad run defense, ranked 32nd in the league in YPC. The issues run deeper than just the inside linebackers. As Watt points out, a depleted defensive line hasn’t gotten off blocks and allowed offensive linemen to easily cover up the Steelers’ linebackers, making their job all the more difficult.

Pittsburgh held the Browns to 98 yards rushing in their Week 8 meeting. To complete the season sweep, they’ll probably need a similar result, meaning Spillane and the gang will need to put in an above-the-line performance. So will Watt and everyone else.