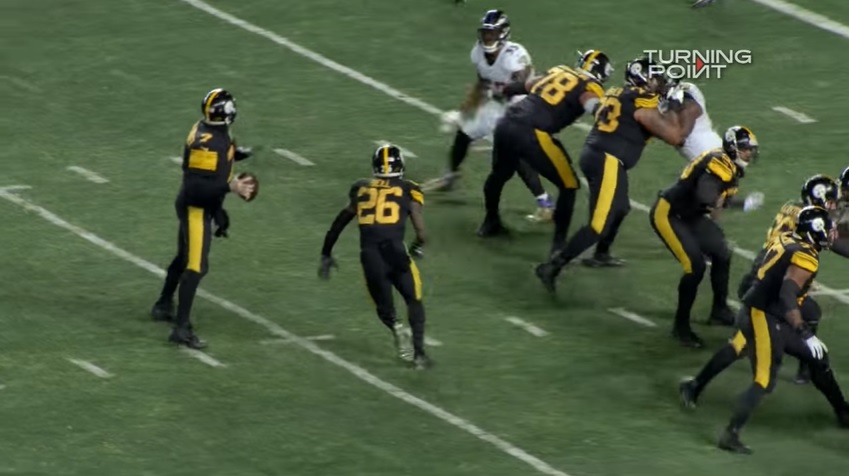 While it may not be wise to speak in absolutes, all signs point to Monday night’s game against the Cleveland Browns as the final home game for QB Ben Roethlisberger in his illustrious Steelers career. Roethlisberger mentioned earlier in the week that this could be his last home game at Heinz Field, and unless the Steelers win out and the Cincinnati Bengals lose their last two games, Pittsburgh’s chances of winning the AFC North are slim.

In preparation for what is to be an emotional night for Roethlisberger, the Steelers organization, and Steeler Nation as a whole, here are several key performances from Ben at home that stick out clearly in my mind during his career.

In the same game where James Harrison had the game of his life on the defensive side of the football, Roethlisberger took the Baltimore Ravens defense to the woodshed on the offensive side of the ball, winning the divisional matchup on Monday Night Football by a score of 38-7. Roethlisberger was extremely efficient in this performance as it appeared that he could do no wrong, completing 13-of-16 pass attempts for 209 yards and five TDs in the convincing win. Santonio Holmes and Nate Washington both hauled in tow scores from Ben along with Health Miller reeling in a TD catch, sticking it to the Ravens at Heinz Field.

Here’s Ben Roethlisberger’s first touchdown from a 38-7 victory over the Ravens from 2007.

Trevor Pryce was a 290 lb defensive lineman & 4x Pro Bowler yet Ben shakes him off like he’s nothing. Incredible strength. #Steelers pic.twitter.com/Cgb2uMx73h

This would go on to be the first of three 500-yard passing games in Ben’s career in a back-and-forth debacle with the Aaron Rodgers-led Green Bay Packers that combined for 973 total yards of offense. The Steelers won the game 37-36 on a last-second TD pass from Roethlisberger to Mike Wallace with no time left on the clock, providing the perfect ending to an instant Steelers classic. Ben was superb in this game, completing 29-of-46 passes for 503 yards and three TDs with zero INTs. This game came early in my fandom of the Steelers and made me truly appreciate that the game was never over when #7 had the ball with time left on the clock.

Roethlisberger torched Heinz Field in this one against the Andrew Luck-led Indianapolis Colts, winning the game in a barnburner 51-34. Both offenses combined for 1,087 yards of total offense on the afternoon, but this was a game where Pittsburgh jumped to an early lead thanks to Ben’s stellar play. He completed 40-of-49 pass attempts for a whopping 522 yards and six TDs with no turnovers for his greatest statistical performance in the Black and Gold, shredding the Colts pass defense. The offense was at the height of its powers with the Killer B’s in tow, and Ben made sure to take advantage of the talent at his disposal for an all-time great performance.

Roethlisberger had his greatest two-game stretch of his career back in 2014, throwing for six TDs in back-to-back games for the first time in NFL history after tearing apart the Baltimore Ravens the following week after beating Indianapolis. The Steelers won the game 43-23 on Sunday Night Football, and Roethlisberger showed out on primetime, completing 25-of-37 pass attempts for 340 yards and six TDs. He did lose a fumble in the contest, but Ben was unconscious for most of this game, tearing apart the Baltimore secondary on national television while sticking it to their division rival.

In the game often referred to as “The Immaculate Extension” the Steelers beat their division-rival Baltimore Ravens on Christmas Day by a score of 31-27. Roethlisberger wasn’t as prolific in this game, completing 24-of-33 pass attempts for 279 yards and three TDs with two INTs, but he came up big when the team needed him most, leading three TD drives in the final quarter including a last-second TD pass to Antonio Brown to ice the game and secure the win for Pittsburgh to make Steelers fans full of joy during the holiday season.

Throwback to #Christmas when the #Steelers and #Ravens played each other.

Ben Roethlisberger has more passing yards than anyone on Christmas.pic.twitter.com/YglFfuv7oX

What are your thoughts of the performances Ben Roethlisberger has had at home over his career? Do you specifically remember any of these games? Do I leave off any performances that stick out to you personally? Please leave your thoughts in the comments section below and thanks again for reading!