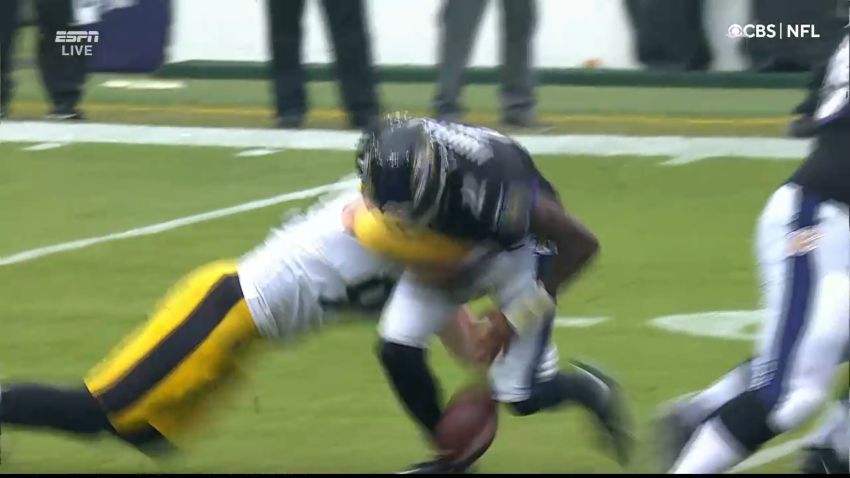 Pittsburgh Steelers outside linebacker T.J. Watt officially finished the 2021 regular season with 22.5 sacks. That tied him for the most sacks ever recorded in a single season in NFL history, now sharing the official NFL single-season sack record with Michael Strahan, who reached that total in 2001.

He did that with a late-first-half sack of Tyler Huntley this past Sunday against the Baltimore Ravens—but he had two other takedowns of the second-year quarterback with the ball in his hands earlier in the game, neither of which counted as a sack. One was negated by a penalty, and thus officially was not a play. The other was deemed to be an aborted play, even though he forced a fumble.

That came on the Ravens’ opening drive, just five minutes into the game. Center Bradley Bozeman’s snap ricocheted off of his own derriere, leaving Huntley to scramble to scoop it up, going to the ground. He got back up and tried to advance the ball, at which point Watt was on him, jarring the ball loose for a takeaway—but not a sack.

And that is how it remains. As we wrote earlier in the week, the Steelers formally requested that the official scoring of the play be reviewed. It was, and the review held up as an aborted play. As we highlighted in the post, the NFL’s official guide for statisticians provides the grounds for this, reading, “If there is doubt as to whether or not the player recovering the fumble was able to collect himself and make a legitimate apparent attempt to pass, the play shall be regarded as an aborted play”.

Thus, despite the Steelers’ best efforts, Watt will have to learn to share the record—at least until next season, when he’ll no doubt make another effort to break it. As you would expect, he was asked whether or not he was disappointed in the ruling.

“I don’t know, man. All that stuff’s out of my control. It is what it is at this point”, he told reporters about the statistical ruling keeping him from outright owning the single-season sack record. “The regular season’s closed, and we’re on to the postseason”.

This is how it was officially scored:

The play did help boost his numbers, giving him five forced fumbles on the season. He was named a unanimous first-team All-Pro yesterday, increasing his odds that he will finally earn the Defensive Player of the Year Award, for which he has been a high finalist the past two seasons.