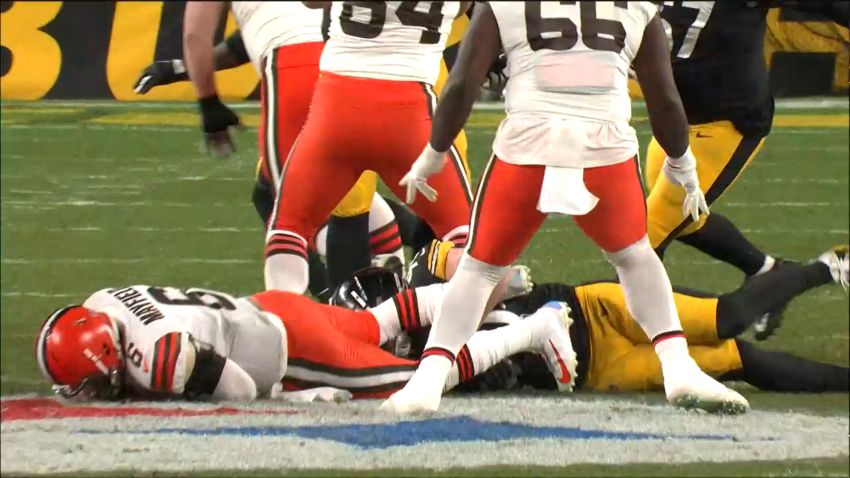 The Cleveland Browns were already eliminated from postseason contention before they even took the field on Monday night. Then quarterback Baker Mayfield got whacked time after time, over and over again, taking more sacks than he ever has in his career. That would be nine times, topping his prior career-high by three.

That’s left him feeling a certain way, and that certain way isn’t going to be good enough for him to suit up for Cleveland’s now thoroughly meaningless regular-season finale against the Cincinnati Bengals, who likewise have nothing to play for, having already secured the AFC North title.

The fourth-year quarterback has played nearly all season with a torn labrum in his shoulder, mind you, and he has suffered further injury along the way, in addition to catching COVID-19. He’s beat up, and there’s no denying that, nor any point in denying it.

That’s why he won’t be out there in the finale, as head coach Kevin Stefanski confirmed yesterday. “Baker will not play in this last game. We are going to hold him out”, he said. “He is going to get surgery scheduled really as soon as possible so that he can get back healthy as soon as possible”.

Mayfield made it clear in his post-game comments on Monday night that he was planning to get surgery as soon as possible. The expectations are that he should be ready to go around the time of OTAs next season. He’ll be entering his fifth year at that point, and right now, it doesn’t sound incredibly likely he’s going to get a contract extension, even acknowledging that he played hurt all this year.

“Throughout this whole thing, we have tried to make the right decision based on all of the information available to us, constant dialogue with our medical staff and with Baker and all of those types of things”, Stefanski said about playing Mayfield through injury. “Throughout, I have really felt comfortable based on all of that information that he was able to play and those type of things. Obviously, frustrated for him, but just felt like that was the right thing to do for right now”.

The first question the quarterback was asked Monday night was about the sacks that he took. He did offer some light criticism of the team’s gameplan with regards to pass protection, saying in so many words that it was a mistake not to provide help for rookie right tackle James Hudson III going up against T.J. Watt (which should be profoundly obvious).

Stefanski was asked how they could have avoided so many sacks during the game, and he offered the suggestion of staying on schedule, noting their long distances on possession downs. He did not make any mention of protection schemes.

“I think it is just something when you do not accomplish what you want to accomplish, people are certainly frustrated”, he did say when specifically asked about Mayfield’s post-game comment. “We will always look at what we could do better. There were plenty of times that we did have a person in location to chip and those type of things. Other times protection held up, and ultimately, whether it was we did not get the ball out, guys were not open or whatever it was, it is always a multifaceted-type thing. That is our job to look at and try to find a way and be better”.

Sure, they did occasionally have a back or a receiver or a tight end throw a quick chip Watt’s way before leaking out into a route. But you could count on one hand the number of times they actually put two people on the presumptive Defensive Player of the Year, and, well, you saw what happened.