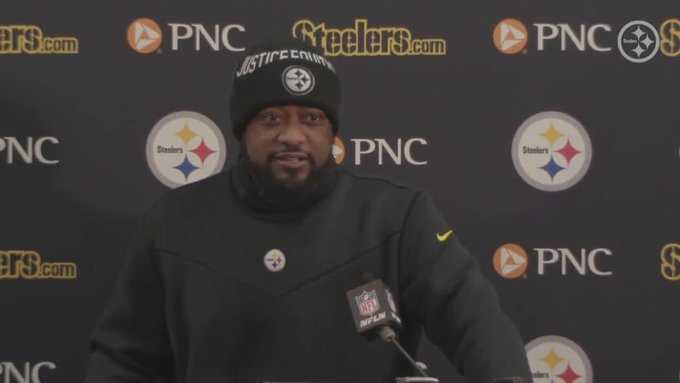 The final week of the regular season in the NFL can often be a bunch of scoreboard watching as teams continue to angle for playoff spots or aim to know when to pull the starters and give much-needed rest ahead of the playoffs.

That’s usually the case for teams across the league, but not the Pittsburgh Steelers on Sunday inside M&T Bank Stadium in a matchup with the Baltimore Ravens — one that they’d ultimately win 16-13 in overtime.

Despite needing some outside help to get into the playoffs, most importantly a Jacksonville Jaguars’ win over the Indianapolis Colts, the Steelers were focused on the task at hand: Beating the Ravens on the road, according to head coach Mike Tomlin and defensive captain Cameron Heyward.

“I was not worried about it, not one iota,” Tomlin said to reporters, according to video via the Steelers’ official YouTube page. “We had a job to do in our stadium today and we did it. And so we’re prepared to deal with whatever the consequences are. The other things that are outside of our control, we gave that up maybe weeks ago, you know? What we needed to get done today, we did it. And they should be proud of that.”

The Steelers should certainly be proud that they were able to focus on the task at hand and handle the necessary business on the road against a tough AFC North rival as such a young team. That can be largely a testament to the preparation and leadership from guys like Tomlin, the rest of the coaching staff, Cameron Heyward and Ben Roethlisberger, keeping the team focused on the task at hand, pushing onward even if the scoreboard inside the stadium didn’t show what the Steelers wanted at the time.

Even while trailing, the Steelers were never really worried about what was transpiring in Jacksonville, according to Heyward.

“I don’t think we really cared what Jacksonville did at the time. We were too locked in on the AFC North battle out there,” Heyward said to reporters following the overtime win, according to video via the Steelers’ official YouTube page. “They got the ball first as a defense, you say, ‘all right, let’s get off the field’ because that’s their shot. We eventually got off; did we trade back and forth? And then we got the score, but…I can’t even remember, I’m all over the place. But man, it was a team effort. Everybody contributed to this win. Like I said, it wasn’t perfect, but guys just kept battling, made some key plays down the stretch on the road.”

For all the talk that this team lacks leadership, the performance on the road Sunday proved otherwise, as the Steelers were locked in from the start and were able to focus on what needed to occur inside the stadium they were in, rather than scoreboard watching and losing focus.

Because of that, they live to fight another day with a likely AFC playoff berth once again.