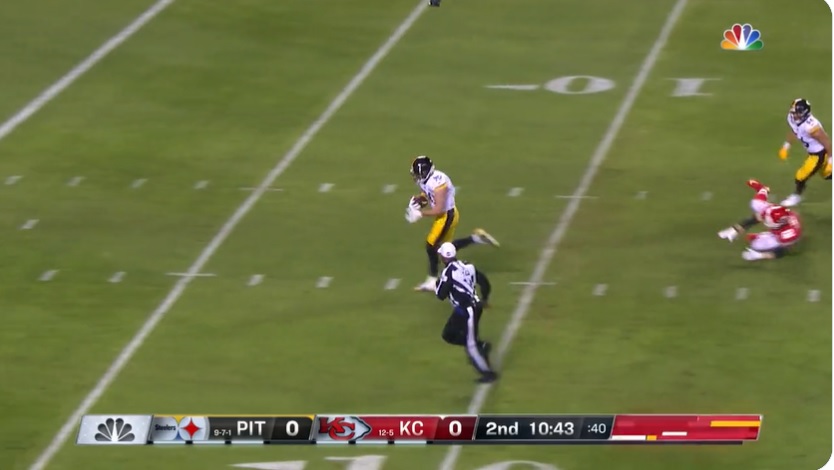 Winners and losers from the Pittsburgh Steelers 42-21 loss to the Kansas City Chiefs Sunday night.

T.J. Watt: It wasn’t enough, but the Steelers’ stars played like stars. It was the defense that kept things interesting, for a little bit anyway. Watt got things started with a great leaping pass deflection that led to Devin Bush’s interception and negated a long Chiefs’ punt return. Watt scooped up Cam Heyward’s forced fumble for the Steelers’ first touchdown and only lead of the game.

Cam Heyward: Watt’s scoop-and-score gets the highlight, but remember it was Heyward who knocked the ball out to be recovered in the first place. Heyward was strong throughout the game, holding the point of attack and showing tremendous downfield effort. He and Watt alone weren’t enough to win this thing, though.

Pressley Harvin III: Harvin has deservedly received plenty of criticism for his performance in recent weeks. And it was a mild surprise to see the team turn back to him for tonight’s game. But Harvin punted reasonably well with a couple of 50+ yarders and seemingly good hangtime. It was the coverage unit that was the problem on punts, not Harvin.

James Washington: Little love to the offense on an otherwise bleak night. Good performance for him with two jump-ball wins, including a fourth quarter touchdown. That’s when he’s at his best. Contest, high-point, and finish. Highlights he can show teams when he hits free agency.

Diontae Johnson: You can’t pin this loss on one guy. But Johnson’s mistakes were among the costliest tonight, not giving a struggling offense any chance to get going. Since his Pro Bowl “snub,” which certainly doesn’t look like one anymore, he’s regressed, and his drop issues have popped back up. Had two tonight, plus a false start, plus miscommunication on a 3rd and 2 that led to a Steelers’ punt. After a strong initial 12-13 weeks of the season, he faded down the stretch. Running through the tape will be his goal next season.

He did have a nice release on the Steelers’ first offensive touchdown, but the game was long decided by that point.

Communication: Bouncing off that above point. Big issue on the road in tough Arrowhead. Multiple communication issues, one on Johnson, one on Pat Freiermuth, both leading to punts. Trai Turner may have missed a blitz pickup, and overall, the offense was rarely on the same page. That happens when you’re on the road in a hostile environment, but it doesn’t make it any easier to watch.

Third Down Offense/Red Zone Defense: All goes hand in hand. The drops, the miscommunication, and just being in third and longs to begin the game. The Steelers started 1-8 on third down. Not going to beat the Chiefs that way. While the Steelers did well to create two early turnovers, and make no mistake, the defense is the sole reason why this thing was close 20 minutes in, they struggled in the red zone. Chiefs bust out so many creative plays in the low red zone that are nearly impossible to stop, and Pittsburgh had no answer. KC went 2-2 in the red zone in the first half despite having just a middling red zone offense on the season. They finished the game 4-4, with a touchdown to an offensive linemen and Travis Kelce throwing a score.

Joe Haden/Cam Sutton: Outside corners couldn’t allow big plays tonight. They did. Haden gave up a long completion to Demarcus Robinson and a TD to Steelers-killer Byron Pringle, who now has three TDs in two games against the Steelers this year. That came on a double-move that Haden got suckered into. Sutton allowed a long TD to the very speedy Tyreek Hill. Tough matchups and moments, but ones the outside corners did not win tonight.

Punt Coverage: Harvin wasn’t the issue tonight. It was the punt coverage. Tomlin said this week the Steelers needed special teams splash and avoid allowing any. They failed. 21-yard punt return on Harvin’s first punt, 48-yard runback on his third. The latter was negated by Watt’s tip and Devin Bush’s INT the following play, which makes the return sting a little less. Miles Killebrew did have a great open field tackle, but overall, the splash worked in KC’s favor, not Pittsburgh’s.

Coaching: Across the board. Chiefs are a top-tier team, but the Steelers were bodied in two straight games against them. Matt Canada’s done nothing to make this offense even marginally successful, even knowing some of the issues are on-field. And the Steelers’ defense got torched in yet another playoff game. Not even Danny Smith is safe here with the poor coverage units.