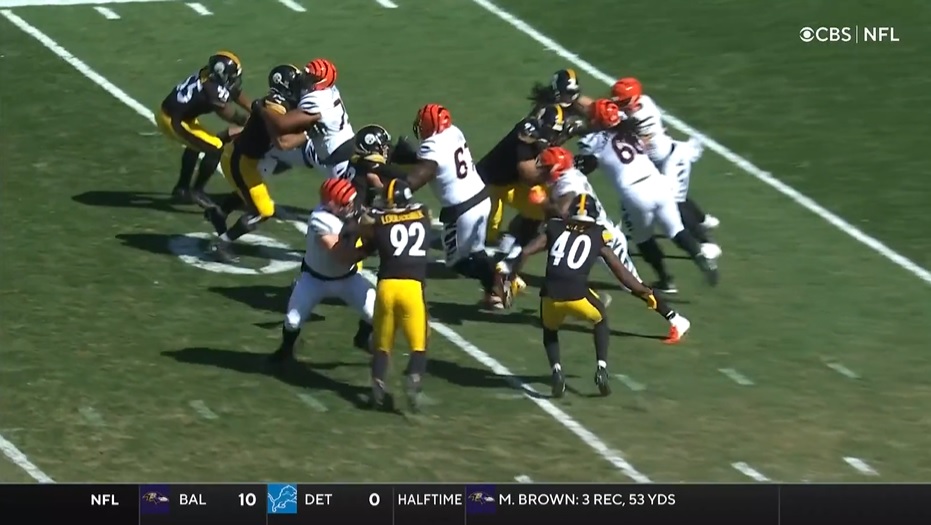 As we’ll do every week to get you ready for the upcoming game, our X-Factor of the week. Sometimes it’s a player, unit, concept, or scheme. Here’s our X-Factor for Monday night’s game against the Cleveland Browns.

Specifically, in the Steelers’ run defense. The last time Pittsburgh played even semi-respectable run defense was essentially that Week 8 game against the Cleveland Browns, holding Nick Chubb and company to under 100 yards rushing. Since then, Pittsburgh has allowed 100+ yards rushing in eight straight games, something that hasn’t been done since the Eisenhower Administration.

Although they allowed another 100+ game to the Kansas City Chiefs last week, they did show better run defense. Much of that can be credited to improved lane and gap integrity. Fewer blown assignments, better run fits, and a group that flowed down the line on perimeter runs. The issue against the Chiefs was hidden yardage, yards after contact and a defense not finishing consistently enough. In that Browns’ game, the Steelers had similar success, maintaining their gap and playing team run defense to hold Chubb in check.

That has to be the story again. We’ve found out that Dan Moore Jr. can get smoked by Myles Garrett and the Steelers were still able to find a way to win. But they won’t be able to win if they can’t minimize Cleveland’s run game.

That mission will be even tougher without LB Joe Schobert and DE Chris Wormley. Wormley has been an underrated piece this season, filling in admirably for Stephon Tuitt even though Wormley doesn’t have the highs of Tuitt’s game. Schobert has not played well this season, and owed nearly $9 million in base salary in 2022, arguably should be released this offseason. But with Devin Bush still on the COVID list, and even if he’s activated, it means he’ll have extremely limited practice reps the last two weeks. Depth at inside linebacker is thin. Marcus Allen could wind up starting next to Robert Spillane Monday night with Ulysees Gilbert playing in dime packages. Yikes.

Winning the trenches will also hopefully point the time of possession arrow in the Steelers’ favor. They’ve lost that battle in six straight games, and in some games, they’ve lost badly. In their first meeting, Pittsburgh did win the TOP battle, 31:45 to 28:15.

Hold the Browns to under 100 yards again, break the streak, and the Steelers’ chances of winning are pretty good. Allow Chubb to run all over the place and you’re bound to get the results of the last Browns’ win over the Steelers, the 2020 Wild Card game where Cleveland blew out Pittsburgh.